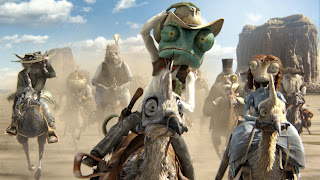 “Believe in that there sign. For as long as it hangs there we've got hope.”

How could I possibly describe “Rango?” I guess the best explanation would be “it’s an animated Western.” Of course it’s much more than that because if were only an animated Western I probably wouldn’t like it that much since it’s not one of my favorite genres. And it’s not quite a kids movie since it seems too intense for the little ones and probably too confusing for the older ones. In fact, I’m not quite sure what the appropriate audience is for the Nickelodeon-produced flick about a thespian chameleon who gets lost in the desert and happens upon a run down town that has lost their water supply. There’s a social message in here somewhere and there are even a few laughs along the way. The highlight is definitely Rango, our colorful lizard hero who longs to be just that: a hero.

We’re introduced to this lizard guy, voiced by Johnny Depp, as a pet chameleon who gets separated from his human owners and left out in the middle of the open road. He’s quickly given some advice from an armadillo that’s been run over. He’s quickly attacked by a hawk who just wants something to eat. And soon he runs into another lizard name Beans (Isla Fisher) who warns him that her townsfolk don’t take kindly to strangers. This old Western town, appropriately named Dirt, is full of strange inhabitants and they’re all worried about the lack of water in their town. Their bank, doesn’t hold money, but rather precious water which is the source of their very survival. They’re forced to drink cactus juice which appears to cause severe hallucinations. We’re quickly introduced to a bunch of colorful characters which include various desert-dwelling animals. The towns Mayor, (Ned Beatty) a giant wheel-chair bound tortoise, doesn’t seem quite right off the bad and we’re not exactly sure what his deal is. Although it’s certainly suspicious that he hoard some precious water for himself.

This chameleon, who had previously been unnamed names himself Rango and tells the townsfolk that he’s actually a tough drifter and they quickly see him as some sort of possible savior. Of course remember I said he’s a thespian who’s more interested in being something he’s not. Soon that peskly hawk is after Rango again and this time Rango defeats him, which immediately cements the idea that Rango is the one. The Mayor even makes Rango the town sheriff. Soon after however, some thieves make off with the rest of the town’s limited water supply and it’s up to Rango to find the culpriets and bring them to justice. And before we know it there’s an appearance by a Clint Eastwood look-a-like and a scary rattle snake named Jake who seems way too scary a character for little kids to handle.

Rango was written by John Logan, directed by Gore Verbinksi and produced by The Departed’s Graham King which probably all explains the sheer strangeness of the entire thing. The film feels rather cinematic which tends to happen when a live action director does animation. It sort of feels like his previous efforts The Mexican and the entire Pirates trilogy. It features a great Hans Zimmer score and plenty of movie in-jokes for adult audiences. The entire film’s animation style is pretty breathtaking; it’s never truly “cartoony” which is probably explained by the fact that the special effects company ILM animated the entire film (the company’s first such endeavor). The voice work is terrific as well (and the actor’s supposedly acted out their parts with props and such) and there’s plenty of weirdness to talk about once the film is over. If there’s any complaint, it seems the movie appears to run a little long in my opinion, with the film sort of running out of steam towards the end.

“Rango” is certainly a strange and original animated movie. Don’t let the idea that it’s a cartoon turn you off, because it features plenty of good fun for big movie buffs. Rango is a cute character who is certainly memorable and it features some pretty scrumptious animation. Good times indeed. And bonus points for the owl mariachi band, they're definitely a hoot. GRADE: B

Thanks for a marvelous posting! I actually enjoyed reading it, you may be a great author.I will make certain to bookmark your blog and definitely will come back very soon.
I want to encourage yourself to continue your great posts,
have a nice day!

I like the post format as you create user engagement in the complete article. It seems round up of all published posts. Thanks for gauging the informative posts. cara menggugurkan kandungan

Lucy Jenner said...
This comment has been removed by the author.
2:34 AM

thank you for the information provided, we are waiting for the next info