Cabin Fever: “The Cabin in the Woods” is an Insult to Horror Fans Everywhere 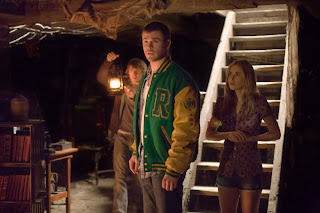 What is a huge horror fan supposed to think of a movie that mocks the genre that’s made by people who have never worked in the genre before? I would trust Wes Craven or Kevin Williamson in this regards. And as big a fan base as Joss Whedon has, having created the “Buffy the Vampire Slayer” TV show (and the movie it was based on) is not enough for me to buy a whacked out premise that entirely makes fun of a genre that I know all too well. “Scream” successfully found a balance between horror and satire over 15 years ago in “Scream” but “The Cabin in the Woods” follows a different story. You’ve seen it before: a few attractive coeds go away for a weekend getaway in the woods, and proceed to be killed off by the zombies they unwittingly unleashed upon the earth. Except this time, there’s a reason why this is all happening. Someone is controlling things. Think “The Truman Show” meets “The Evil Dead.” And while that idea might sound fascinating on paper, in reality it makes for a rather hokey movie that never quite congeals. This movie is less homage and more insult to anyone who really enjoys the horror genre. You can get much more out of films like “Scream,” “Wes Craven’s New Nightmare” and “Funny Games” then you can out of “The Cabin in the Woods.” And if you want something that is a great mix of comedy and blood-n-guts, check out “Tucker and Dale vs. Evil” which takes all of you expectations about the “teens in the woods” plotline and turns it upside down – in a way that isn’t discourteous to its fan base.


Obviously Whedon and his co-conspirator (and the director) Drew Goddard have seen enough horror flicks to be able to see the clichés. But I’m not sure they know the genre well enough to explore it in a way that Kevin Williamson was able to do with “Scream.” They follow the formula to a T, including five cliché ridden and uninteresting characters.. You don’t care about them, just like in every other movie this movie is supposed to be skewering. Chris Hemsworth is the “jock” Curt, and traditional good looks aside he’s a rather bland actor. Kristen Connolly is the “virgin” and she’s rather bland too – you remember her as “woman reading on bench” in the eye-roll inducing “The Happening.” Anna Hutchinson is Jules the “slut” – you know the one who bares her breasts and then quickly meets her maker. “Scream” was smart enough to not show single bare breast – and the one character who actually had sex was the virginal one! The “smart guy” is Holden, played by Jesse Williams from “Grey’s Anatomy.” And the most obnoxious character of them all is of course, the “stoner guy” Marty played by Fran Kranz. These five unlikely friends set off to spend a weekend in Curt’s family’s cabin in the woods. Why anyone would decide to go to a rundown cabin in the woods for a weekend is beyond me. But remember someone is “controlling” these kids to do exactly what they want. Who these “controllers” are is something you’ll have to be patient in finding out. And frankly, the payoff is not nearly as satisfying - or intelligent - as you might expect. After all were talking about the guy who wrote “Alien: Resurrection” - completely well known for it’ intelligent story. NOT.

The biggest problem with “The Cabin in the Woods” is that any chance at scary moments are ruined once the film cuts to the characters controlling the college kids. They’re played by Richard Jenkins and Bradley Whitford. They have corny lines of dialogue that some people found funny – but I found completely out of place. Is this movie a comedy or a horror movie or what? I did enjoy a fun cameo appearance later in the film, but by that point the film becomes too hokey, silly, and downright stupid; my forehead hurt from being slapped so much. There’s not much more that can be said without ruining the entire experience. Which would probably be a good thing.

“The Cabin in the Woods” is sort of a misfire. It’s a film that thinks it’s wildly original and innovative but is way too insulting to its core audience. It makes fun of the conventions found in these films and yet it doesn’t do anything to change them. It's more mockery than homage. It’s a horror film for people who don’t like horror films, which explains why those stuffy film critics have been praising it. Any true hardcore horror fan will appreciate what it’s trying to do, I did, I swear – but will realize that, like the characters in the film, we’re just being duped. GRADE: C

Broadband wireless internet providers are not available in all areas.
Prepaid travel cards are a great option forr those wishing to withdraw and
spend money abroad. ISPs usually ofder competitivve rates, so you
shouldn't expect much discrepancy between these.