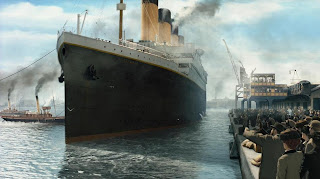 James Cameron is a master filmmaker. He can take any subject or genre and give it mass appeal. And when a movie’s primary goal is to entertain the masses Cameron is definitely one of the best. He recently made an epic film about blue aliens and made it thrilling, enthralling, and artful. He did the same thing in 1997 with the tragic story of the RMS Titanic disaster from way back in 1912. It was the movie to see back in 1997 and the people came in droves, making it the highest grossing film of all time (until it was sunk yet again, this time by Cameron's own “Avatar”). “Titanic” remains an expertly crafted and minutely detailed account of the Titanic’s sinking and a romantic story of two star-crossed lovers. Sure some say it’s just “Romeo and Juliet” on a boat, but it remains to this day, as one of the best and one of the most popular films of all time, winning 11 Academy Awards in the process. And now it’s back on the big screen, in 3D no less.

If anyone can find any fault with Titanic it’s probably the film’s mildly subpar screenplay written by Cameron himself. Some lines of dialogue are cheesy (“My mother saw him as an insect, a dangerous insect which must be squashed quickly,” older Rose proclaims.) And some scenes are just sort of awkward, including Jack teaching Rose how to “spit like a man.” The Academy agreed, snubbing Cameron in the Best Original Screenplay category that year (Don’t fret, he walked away with three Oscars that night). The film sort of awkwardly uses a present day framing device and a MacGuffin (a greedy shipwreck explorer played by Bill Paxton is looking for a famous jewel, The Heart of the Ocean, which supposedly was part of the Titanic wreckage), which basically just gave Cameron an excuse to explore the ship’s real wreckage and integrate the footage into the movie. And old woman named Rose (Gloria Stuart), who survived the tragedy, accounts her experience on the famous ship - which consisted of a love affair with a poor guy.

If a weaker screenplay is Titanic’s only real fault, it makes up for it in nearly every other cinematic area. The performances are simply exquisite. Kate Winslet singlehandedly cemented her wonderful American acting career in the role of Rose Dewitt Bukater. She plays a rich woman who longs for something more in life. It’s refreshing to see a woman in this time period who’d rather slum it with a poor guy than discuss finances at teatime. And Leonardo DiCaprio, as the good-at-poker steerage passenger Jack Dawson, sailed into the hearts of nearly every teenage girl on the entire planet. “Titanic” was a movie that made movie stars and even though DiCaprio was not nominated for his performance, he has come to be regarded as one of the best actors of his generation.

It is Cameron’s minute details that can really make a viewer appreciate why “Titanic” is such a terrific film. Nearly all the characters (besides Jack and Rose and her family) are real-life people who were actual passengers on the ship. We meet the captain and even the ship’s builder. And the famous “Unsinkable” Molly Brown (played here by the always wonderful Kathy Bates) makes an appearance and even helps Jack fit in with Rose and her rich, stuck up family. Just look at the film and you can witness its opulence. Cameron actually built a smaller replica of the entire ship, which helped the film’s budget bubble wildly out of control. But you can see all the great attention to detail in the film’s glorious production design. And look at the costumes and make-up. The film gets every period detail perfect, down to every button and seam. And the fact that the film mixes eye-popping visual effects with this period detail makes the film one of a kind. The first half of the film works as an opulent drama that introduces us to the world of the Titanic and its passengers, while the film’s second half works as a balls-to-the wall action flick as the passengers try to avoid succumbing to the Atlantic Ocean’s deathly cold temperatures (James Horner’s haunting score helps sell the emotion). It also features plenty of Cameron’s trademark steely blue lighting (let’s thank cinematographer Russell Carpenter). Of course, the less said about the sort of out-of-nowhere gun chase the better.

“Titanic” is a glorious film. The new 3D version still retains the wonder that I experienced fifteen years ago. It’s not the most amazing 3D I’ve ever seen since it wasn’t made that way, but Cameron can do no wrong in my opinion. The film is lavish and luxurious just like the Titanic itself. It has romance and it has action. I see it as one of the greatest disaster-action flicks of all time. It’s a genre blockbuster and yet it retains intimate drama. It appeals to women and men and offers so much of what we go to the movies for in the first place. It’s a visual wonder to behold and even with a run-time of over three hours, the film moves along swiftly. It certainly puts the motion in motion picture and remains one of the ultimate movie theater going experiences. GRADE: A

I'm not sure why but this web site is loading extremely slow for me.
Is anyone else having this issue or is it a issue on my end?
I'll check back later on and see if the problem still exists.

I absolutely love your blog and find almost all of your post's to be
exactly I'm looking for. Would you offer guest writers
to write content in your case? I wouldn't mind creating a post or
elaborating on some of the subjects you write about here.
Again, awesome weblog!

Custom watches associated with ladies tend to be mainly decorated together with valuable valuable gems as well as gem gemstones, and also provide connectors made from silver jewelry; for your own young trendy collection, you will find vivid plastic-type fittings cheap replica Bell & amp Ross BR 01-92 watches inside stunning shades. They might be built to complement a females elegance as well as fashion regardless of what mood they might be into. Dressy, daily, sporty--there's a detailed look to complement replica watches UK the concept. Timepieces faux montres omega are essential items associated with jewelry. Ordinary or even specialist women and men rely upon watches being liable replica Audemars Piguet Contemporaine Collection watches concerning operate, routines in addition to pleasure. Event is valuable. After a person overlooked which, you cannot buy knockoff Christian Dior ever proceed it back again. Ladies metallic timepieces are simply just designer watches which are used about the hand whether it is on the best of left and it is distinctive towards the females in order to wear.