A Very Long Engagement: Jason Segal and Emily Blunt are Charming in the Overly Long “The Five-Year Engagement” 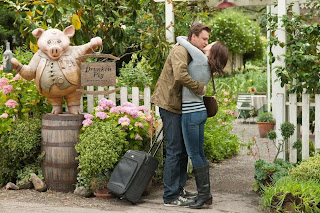 It seems as though every time a Judd Apatow-produced comedy is released it surpasses the last one. But the last one was “Bridesmaids” which instantly went down in history as one of the best comedies of the decade. It even scored two Oscar nominations; a feat none of the other Apatow comedies could accomplish. A follow-up film couldn’t only seem like a disappointment in comparison, but “The Five-Year Engagement,” even with its over length, manages to be another warm and funny romantic comedy that will have general audiences laughing with delight. The film’s biggest asset is the wonderful pairing of Apatow regular Jason Segal with the hilarious British beauty Emily Blunt. The duo make a winning pair, and over the course of nearly two hours, we root for these people to get married, although by the end, we’re nearly shouting, “Just do it already for God’s sake!”

Jason Segal and his co-writer Nicholas Stroller (who also directed) previously collaborated on “Forgetting Sarah Marshall.” That film dealt with the harsh realities of  painful break-up. Here, they tell a story about a couple who keep pushing off their marriage engagement and the strain it causes on their relationship. Segal is Tom, who proposes to his girlfriend Violet (Blunt) at the beginning of the film. They’re happily living in San Francisco and their family is thrilled, well most of them, about the engagement. But Violet gets a letter from the University of Michigan accepting her into their psychology doctorate program. They pick up and move (with Tom leaving behind a great sous chef job) to Michigan, putting off their wedding for two years.

You don’t have to guess that two years quickly turns to five years and Tom and Violet are not yet married. That’s the basic story here as we follow the ups and downs of Tom and Violet’s relationship. Tom can’t find a good job and is forced to work at a local sandwich shop. We get to see a lot of Violet’s psychology program, in which she conducts some pretty hilarious social experiments involving stale donuts. Let’s just say I was craving a donut after the movie; maybe the whole film is just an experiment itself? There’s a lot of stuff here that I found to be rather extraneous and as a result the film feels unnecessarily bloated. It’s like that “unrated cut” you find on DVD these days with twenty minutes of added footage cut back into the movie. Things could have easily been trimmed up, but I appreciate the efforts made to develop these characters and make us care about them. But after awhile you kind just hope they’d fly to Vegas and get it over with.

And what’s an Apatow comedy without some hilarious supporting characters? This film doesn’t feature as many good ones as in the past – no one comes near the performance of Melissa McCarthy in Bridesmaids, but that’s an unfair judgment. Violet’s sister Suzie is played by Community’s Alison Brie, sporting a convincing British accent. She gets knocked up by Tom’s friend Alex (Chris Pratt) and to be honest, I could probably watch an entire movie about this couple too. Oscar nominee Jacki Weaver plays Violet’s mother who doesn’t quite approve of the engagement but insists on getting the wedding done quickly as grandparents “have a tendency to die.” And do they ever. The film rather darkly, but comically, uses the passing away of several grandparents as a way to show the passage of time.  There are some other darkly comic moments which I’d rather not spoil here, but there are plenty of standout laugh out loud moments amongst the drama being played out.

“The Five-Year Engagement” is a good film, however flawed it may be. It could have used some trimming sure, but Tom and Violet’s characters and relationship are so well developed it’s almost disturbing. I’m sure some will find the meandering third act to be sort of slog to sit through, but overall the film was funny and enjoyable and surprising. If you’re a fan of these movies, you’ll find something in here to love.  GRADE: B
Posted by Chris at 10:46 PM

Come visit my site, I tried performing a bit of SEO but it didn't actually work
though
p.s Never take guidance from people on the Warrior Forums :
)

This post will help the internet viewers for creating
new blog or even a weblog from start to end.

Feel free to visit my web-site - make money by website

MacBook Air has a completely recyclable aluminum travelling bag and all its
circuit panels are BFR and PVC complimentary. Thats the explanation MacBook Pro MC700LL
is energy level efficient and free of many people harmful toxins.

A You have a great time, like for students and large family.
Furthermore, aluminum tool boxes are ideal for serving and even smaller ones make
nice ashtrays. In Friday's verdict riad marrakech € 30 on the case.
19% to $1 8 billion concentrated solar project, meant
to produce 500 MW and scheduled to start construction this year.

you could see the second switch that all4webs.com/ enables you to download your breaks from Snapchat. Official Website You can additionally edit your recently captured Snapchat Latest Version Download & Install on PC, APK picture by utilizing pencil icon on the Snapchat leading best side screen. You can add a different Snapchat APK dimension of typefaces.

reveal descriptions as well as stars. Kodi App Video nodes/tags and also wise playlists could Get Info additionally arrange your collection for special interests, making particular displays for sci-fi, Kodi Download anime, and so on Images You can Import images right into a collection as well as.

This is great!
Latest Musics