Rated Arrrrr: “The Pirates! Band of Misfits” is a Decent Swashbuckling Adventure 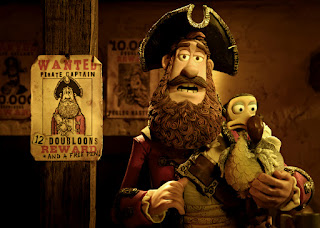 It’s been common knowledge that up until the release of Disney’s “Pirates of the Caribbean” films that pirate movies were usually unsuccessful. Do I really have to mention flops like “Cuthroat Island” and “Hook?” It kind of surprised me that Aardman Animation the company that brought us the Wallace & Gromit shorts and the wonderful “Chicken Run” would opt to make a full-length comedic pirate adventure. The end result gets a sort of lukewarm reception from me as I still believe that animated films featuring humans are sometimes just dull and boring. Is it any wonder that “The Incredibles” is my least favorite Pixar film? That’s not to say that there isn’t a lot to enjoy about “The Pirates!” it’s just that even at 88 minutes it feels like a film that was meant to be a short film.

I have to give credit to screenwriter Gideon Defoe, who adapted his own book, because the film does involve a rather original and fun story. Our main character simply known as “The Pirate Captain” (voiced by Hugh Grant) has a dream of being voted Pirate of the Year. And just a simple goal like this sets him off on a grand adventure to claim the title while dodging British Royalty - namely Queen Victoria (Imelda Staunton) who hates pirates – and other rival pirates like Black Bellamy (Jeremy Piven) and Cutlass Liz (Salma Hayek). The Pirate Captain’s crew is like the island of misfit toys on a ship. They’re a bunch of oddball characters that become rather likeable by the film’s end. Especially that albino pirate (even his clothes are white) who is voiced by Fright Night’s Anton Yelchin. His Fright Night co-star David Tennant voices famed naturalist Charles Darwin who has a large role here who wants to get his hands on The Pirate Captain’s pet “parrot” Polly who is actually a supposedly extinct dodo bird. This leads to a wacky adventure that involves the likes of famous people like Jane Austen and even the “Elephant Man.”

I guess my biggest complaint here is the fact that the film almost doesn’t feel like it needs to be animated. Sure if this story were done with people it would just be silly, but for some reason having so many human characters just didn’t sit right with me. I was thrilled with Mr. Bobo, a trained chimp, who would comically hold up typed cards with whatever he wanted to say written on them. Even the dodo bird was pretty funny even if she didn’t have any lines. I also think, that while the plot was original, it was a little too, dare I say, dense for an animated movie. It wasn’t confusing so much as it felt like almost half the movie was set up for the rest of film. And then the ending sort of goes on forever – although the film’s ultimate reveal involving Queen Victoria was pretty hilarious and well-done.

I’m pretty sure my love of Chicken Run was just sort of a fluke, because I find myself strangely detached to a lot of Aardman’s work. While the claymation itself is as innovative and clever as ever, maybe I just don’t get some of the British humour. Or maybe I wasn’t in the right mood for a swashbuckling pirate adventure? It’s just further proof that pirate movies don’t get made that often because more often than not they’re just kind of uninteresting. Fans of Wallace & Gromit and stop-motion animation will certainly be entertained by “The Pirates! Band of Misfits” but I still think it’s a movie that’s not quite for everyone; you could certainly do a lot worse.  GRADE: B-
Posted by Chris at 10:47 PM