The Smith Element: “Men in Black 3” is Fine, if Unneeded, Summer Entertainment 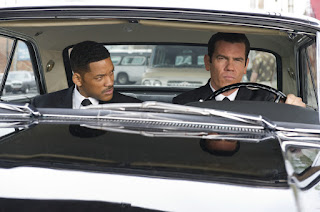 There is no other worse excuse for a screenplay existing than the “alternate reality” scenario in which a character has to go back in time in order to make things right again in the present. Of course, time travel has been the subject of many a great film. “Back to the Future” anyone? How about “The Terminator?” Those movies were pioneers in their genres. Time travel in those films was the basis of the founding story, for movie to introduce time travel into a series that never had it before just seems lazy. In the sequel no one really asked for, “Men in Black 3” time travel is used as an excuse. It’s used as an excuse for not only for Josh Brolin to do a kick-ass impersonation of Tommy Lee Jones, but for an excuse for the movie to even exist. At least some of the same actors and filmmakers (and composer Danny Elfman thank goodness) have returned for another go-round.

“Men in Black 3” is fun and entertaining and appropriately 90s-esque, but has an overwhelming whiff of “does this need to exist?” The short answer is no. But returning director Barry Sonnenfeld and his actors Will Smith (who hasn’t seemed to age since 2002) and Tommy Lee Jones (who has aged rather significantly) have given it their all and even if the film is a poor excuse for a studio to make a quick buck, at least I was distracted for 103 minutes. The story revolves around a pretty cool (and appropriately gross) villain, the alien Boris the Animal (Jemaine Clement), and him traveling back in time to the 1960s to kill Men in Black agent K (Jones) – which in turn somehow causes an alternate present in which an apocalyptic alien invasion takes place. So it’s up to K’s partner J (Smith) to back in time and stop Boris from killing K.

I’m sure diehard “Men in Black” fans will eat this up. There are actually some pretty fun and neat things here. Like I mentioned earlier, the younger version of K is played by Josh Brolin, and he does a disturbingly uncanny impersonation of Tommy Lee Jones’ character. Although I don’t buy him as being 29 (Brolin is actually 44 for the record). The move into the 60s and seeing the early days of the Men in Black agency is sort of fun. There’s a quick trip to Shea Stadium (may it rest in peace) and even the launching of the Apollo 11 spacecraft. Unfortunately the villain which I said was really cool, sort of disappears for a large chunk of the story which deals with K dealing with the 1960s and convincing the young Agent K who he is. Rick Baker, who won an Oscar for the first film, returns and does an incredible job. And there are some great visual effects worked in as well. And even though it’s been fifteen years since the first film, this third outing feels as if it could have come just a few years after the second movie. Which is either a good thing or a bad thing depending on your point-of-view.

It’s difficult for me to recommend “Men in Black 3” to anyone but über-fans who must devour ever morsel of MiB pop culture. There’s nothing particularly wrong with Etan Cohen’s script – it’s just its reason for existing seems unnecessary in a summer that is filled with sequels and franchise films that people are actually excited for (i.e. “The Dark Knight Rises,” “The Amazing Spider-man,” and “Step Up Revolution,” gotcha). Having said that, this third outing could have been a lot worse. It’s certainly serviceable summer entertainment. It has cool effects, some laughs, fun action, good performances, and Bill Hader playing Andy Warhol. You can certainly do a lot worse.  GRADE: B-
Posted by Chris at 9:53 PM

Providing you are a Director or employee of a company, these payments are
an allowable deduction against the Corporation tax liability of the company.
The answer is two-fold: a) customers are now more conscious about the environment and prefer companies that
employ methods that return to and save the environment;
and b) green business management means increasing your customer base while also saving a considerable amount on your day
to day expenses, thereby increasing your profits.
For more of marketing and business technology tips visit us at Global IT Users ' The Marketing and Technology Blog providing solutions to the Challenges you are facing in the IT Sector today and find
a change in the business activities you are doing.