Fallout, Oy: While Nothing New, “Chernobyl Diaries” is Hardly the Disaster it Could Have Been 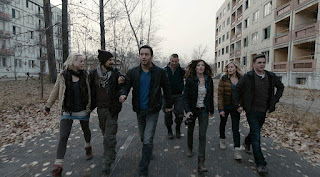 If you’re sick of shaky camera horror films then you should skip “Chernobyl Diaries.” It’s shot like it’s a “Paranormal Activity” movie or “The Blair Witch Project” but without the main character doing the filming. And thank goodness for that because there’s just no excuse why anyone would film the entire ordeal that takes place in this film. Of course the story does involves cameras – it’s about young tourists in the Ukraine who go on an “extreme tour” by hiring a local man who takes them to the abandoned city near the site of the terrible Chernobyl nuclear disaster. Of course, who wouldn’t want to see that? And if we’ve seen from countless horror movies before, what happens when you mix unsuspecting tourists and nuclear fallout? Mutant humanoids of course!

The film is being slickly marketed as from the guy who brought you “Paranormal Activity.” And that is sort of true. Oren Peli, who signed a like a 20 picture deal after his film make a gazillion dollars, is the producer and co-writer of this mishmash of “The Hills Have Eyes” and “The Blair Witch Project.” Think mutants and shaky cameras.

The film attempts to give the twenty something characters personalities, but mostly fails in that area. The story concerns a young guy Chris played by Jesse McCartney and his older brother Paul played by Jonathan Sadowski. They bring along their girlfriends, meet an Australian couple along the way, and hire a local named Uri to take them to Chernobyl. They observe from a safe distance after sneaking in. You see since it’s, ya know, Chernobyl, the area is heavily guarded and people are generally not allowed in. But Uri manages to drive his van full of naïve tourists into this deserted wasteland. They quickly observe some mutated fish. And if that’s not a sign to get the hell out of there, I don’t know what is.

In traditional horror movie fashion, when the group returns to the van to head out of there (after nearly being mauled by a stray bear) they find the engine wires have been destroyed. Like in most of these movies, no one knows they’re there, oh and they’re like thirteen miles from another human being. Or are they. They decide to wait overnight, but not before Uri steps out into the darkness with Chris and Chris returns after being attacked by an unseen assailant. Was it the bear? Was it the violent stray dogs? Was it something big enough to turn the van completely over? Most of the film revolves around our characters running away from something we can’t really see, which works in the whole “what you can’t see is scarier than what you can see” but after a while you want to see something.

And we do. And then we’re not totally surprised, but at least the film remains potently atmospheric and suspenseful for the most part. I jumped here and there at the appropriate spots that were fully planned by the filmmakers. “Chernobyl Diaries” doesn’t really add anything new to the genre, and certainly doesn’t help its constant failed attempts at freshness or originality, but like a comforting meal, it hits all the right spots and goes down easily enough.  GRADE: B-
Posted by Chris at 11:21 PM

If you are going for finest contents like me, just visit
this site all the time since it provides quality contents,
thanks

Greetings! Very useful advice in this particular article!
It is the little changes which will make
the greatest changes. Thanks a lot for sharing!

Every weekend i used to go to see this web page, because i want enjoyment, for the reason that this this web site conations genuinely nice funny stuff too.

Informative article, just what I needed.

I think this is one of the most significant info
for me. And i'm glad reading your article. However wanna observation on some common issues, The website style is great, the articles is in point of fact nice : D. Excellent job, cheers

Feel free to surf to my site ... nice clothing

Aw, this was an incredibly good post. Finding the time and
actual effort to produce a superb article… but what can
I say… I put things off a lot and never manage
to get anything done.

I think this is among the most important information for me.
And i'm glad reading your article. But should remark on some general things, The website style is wonderful, the articles is really great : D. Good job, cheers

What's up, I would like to subscribe for this web site to get most recent updates, so where can i do it please help.

What a material of un-ambiguity and preserveness of precious experience
on the topic of unexpected feelings.

Hello it's me, I am also visiting this website daily, this web site is really pleasant and the users are truly sharing pleasant thoughts.

They are often based about how much one makes but you can find a couple of options if you don't make enough for 5000 dollar one Not Fake
now, we now have usage of scores of great loan packages that allow us to buy
that house in our dreams.

Aw, this was an exceptionally nice post. Spending some time and actual
effort to generate a very good article… but what can I
say… I put things off a whole lot and never manage
to get nearly anything done.

I’m not that much of a internet reader to be honest but
your blogs really nice, keep it up! I'll go ahead and
bookmark your website to come back later. All the best