Madam’s Apple: “Snow While & the Huntsman” is an Entertaining Fairy Tale Update 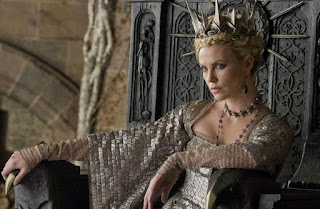 The last thing I want out of a movie is a boring fantasy with strange creatures and magical beings. It took me several viewings to get what the big fuss was about with “Harry Potter.” Which is why it’s with great surprise that I found “Snow White and the Huntsman” to be a fun, more action-oriented retelling of the classic fairy tale. While comparisons to the animated Disney classic are inevitable, no such comparisons should really even be made. This is just “Snow White” for the “Lord of the Rings” crowd, or rather people who may not otherwise really care about this classic story that everyone knows all too well. While the film has its flaws (eye-rolling dialogue and a few lackluster performances) it remains a showcase for one person and one person only: Charlize Theron, who blissfully (and in a rather campy way) steals the movie away from those around her with her wickedly good portrayal of the Evil Queen.

If you’re not a fan of Kristin Stewarts moping as seen in the Twilight movies, this film probably won’t make you a fan. She’s better here as Snow White than her bland Bella role, but not much. The script (by Evan Daughtery, John Lee Hancock and Hossein Amini) attempts to give her more of a personality and a sense of independence and defiance but she still isn’t given all that much to do. And neither is the “Huntsman” played by Chris Hemsworth. He’s just there to look burly and dirty and fight things. Although in the end, she does suit up in armor (including a rather horrible “rousing” pre-battle speech) to fight for her rightful place as Queen (more on that later). But those are silly nitpicks. This is really just a fun fairy tale turned action-movie and in that regard the movie works.

The story of course is rather familiar. A woman basically seduces the King, he falls in love with her, marries her, and then she kills him so she can take over his kingdom. He has a beautiful daughter who makes the Queen, named Raveena, jealous so she locks her away in a dark tower. She even uses her pathetic Finn (Sam Spruell) to get what she wants. This royal beauty is of course Snow White (Stewart) with the fairest skin in the land and lips as red as a rose. But Snow White escapes into the forest and the Queen’s magic mirror says that in order for the Queen to stay young and beautiful she must consume Snow White’s heart. And people say The Human Centipede is gross. The Queen of course is played by the astonishingly talented Charlize Theron. She consumes the role and is just simply exquisite. The role and performance almost borders on the edge of camp, and it actually works. When the film decides to follow Snow White as she makes her adventure through the forest (and meeting some impressively rendered dwarves) with the Huntsman (Hemsworth) on her tail, I felt like the movie suffered. I was way more invested in the Queen’s lust for beauty than Show White’s endeavors to evade capture. There’s also a prince in there somewhere.

First-time director Rupert Sanders has made the film a visual wonder. The cinematography, the costumes, the production design, and the visual effects are all superb. It has a surprisingly epic look and feel. But it’s really just a summer action movie for those who like action and for those who like romance. “Snow White & the Huntsman” tries to please everyone and I’d say in that regard it’s pretty successful. But don’t take it too seriously or attempt to deconstruct what you’re seeing, because then you’ll just find that deep down it’s really just a bad apple, but it’s at least worth taking a bite.  GRADE: B+
Posted by Chris at 11:07 PM

Wow that was strange. I just wrote an extremely long comment but after
I clicked submit my comment didn't appear. Grrrr... well I'm not writing all that over
again. Regardless, just wanted to say wonderful blog!

What's up, the whole thing is going nicely here and ofcourse every one is sharing information, that's actually excellent, keep up writing.

Mobile Prices Bangladesh that is really an great web

Thanks a lot for sharing plenty of information with us. Keep doing. Are you searching for the best way to enlarge the image? If yes, then I would suggest one tool that is waifu2x. With the help of this tool, you can enlarge an image as soon as possible. Here mentioned all the steps for enlarging images. So, go and try it.

I really appreciate to read this blog it is very impressive and informative content. If you want to know what is FaceTime group chat on iPhone? If yes then, The group FaceTime makes it easy to chat with multiple people at the same time. You can start a group FaceTime from the FaceTime app or from a group conversation in the Messages app. To know more about this facetime group chat, I would suggest you can read one blog about how to make facetime. I hope it will be helpful for you.

Great article, I am impressed to visit here. If you are a movie lover then I suggest you can use Netflix. Netflix is a streaming service that offers a wide variety of award-winning TV shows, and movies. But sometimes it is banned for some locations then, dont worry you can unblock Netflix using the node unblocker tool. Visit here, It helps to access all restricted sites and apps easily.

Excellent blog, I enjoyed it while reading. Are you want to know how to acquire AFK Arena redeem codes? If No, then I instruct a post that is related to getting the redeem codes with the help of redeem codes you can get items like diamonds, gold, hero essence, hero scrolls, and soul stones and it would be so beneficial for you. For more essential data go and check out a post.

Amazing post, I like your spirit keep it up. If you are playing online Games like Roblox at School competitions but due to some reasons games are restricted or banned then, don't worry, I suggested you can check one article about Roblox unblocked using the Node unblocker tool. Visit here, and get Roblox without restrictions

Do you need a PDF editor that is both powerful and easy to use? Look no further than A1office. Our software allows you to make changes to any PDF document quickly and easily. Plus, our user-friendly interface makes it simple for even novice users to get the most out of our software. Pdf Editor