Fish ‘n Strips: “Piranha 3DD” Might be the Stupidest Killer Fish Movie Ever Made (OK It Is) 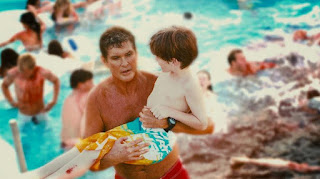 The "Piranha" remake that came out in 2010, which you probably didn’t see because it totally bombed, was one of the best killer fish movies ever made. Its really dumb sequel “Piranha 3DD” (which is supposed to be pronounced “three double d” get it? Breasts. Big ones) is the complete opposite in every way. It’s poorly written, directed, and acted. The effects are pretty bad (although the first film’s weren’t exactly groundbreaking). These are things that could conceivably be forgiven had the movie actually been either scary or at least funny. You will laugh at “Piranha 3DD” to be sure. But not in the way the filmmakers probably intended.

“Piranha 3DD” attempts to be a send up of its original, which itself was already kind of a send up. I think it’s trying to be like “Scary Movie” but it’s definitely not a comedy. Yet it’s not really horror since it is not scary or suspenseful, and even the gory scenes are not particularly special or memorable. It’s so utterly ridiculous and dumb you wonder why the Weinstein Co even bothered at all. I mean this is a movie where you’ll see a baby piranha bit on a teenage boy’s penis after it comes out of the vagina of the teenage girl he’s having sex with. And you’ll see breasts. Lots of breasts.

Let me attempt to explain the premise, which the film takes about 50 minutes setting up (and the film runs about 71 minutes before the credits start rolling). It’s a year or so after the horrible events at Lake Victoria from the first film. This time the piranha are even meaner and can now chew through metal. They get into the drainage system and are hell bent on crashing the opening of a non family friendly water park that is probably seeping in STDs. What do you expect when the sexual predator version of Todd Packer from The Office is running this place? Oh, it’s called The Big Wet. His stepdaughter Maddy (Danielle Panabaker) knows the piranha are coming but that jerk won’t shut the place down. Meanwhile a bunch of other teenagers who we couldn’t care less about are having sexual relations and getting their body parts chewed off.

This all culminates in the big bloody climax that we’ve been waiting impatiently for. The gore scenes aren’t that particularly special. I didn’t mind that director John Gulagar employed some rubber fish instead of using all CGI which gives it a bit of a retro feel, but everything here is just plain bad. He has no real sense of how to stage any of the deaths. And they’re so over the top that instead of laughing at the gruesomeness of it all (which was encouraged and welcomed in the first film) we just roll our eyes. The film is way too busy trying to outdo the original that it forgets about all the other aspects that go into making a quality horror movie.

Unfortunately, this thing has direct-to-DVD written all over it. I can’t say much about its 3D since I had to watch this at home on demand because of the film's scant theatrical release. I will do the rest of the actors a favor and not mention them by name here. I will however mention the cameo appearances by David Hasselhoff, who is an even worse actor when he’s playing himself, and Gary Busey, whose last good film role was “Rookie of the Year.” Damn this movie is bad.  GRADE: D (what else?)
Posted by Chris at 7:36 AM