I Love the 80s: “Rock of Ages” is as Cheesy and Fun as the Decade that Influenced It 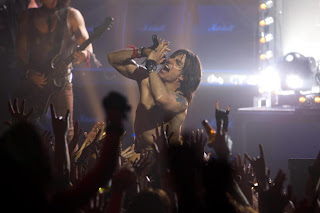 Ahh nostalgia, what has thy done to American cinema? Those who remember the cheesy hair metal rock songs that were birthed during the 1980s will either love or hate the new musical “Rock of Ages.” If you can turn off your brain slightly and enjoy what “Rock of Ages” really is (a glorified bigger budgeted feature length “Glee” episode or celebrity karaoke if you will) you’ll probably find yourself having a good time. The film features great music sung by names you know (and some you don’t) and they all mostly do a great job. The cast is simply having fun and all they ask of you is that you do to. After all this is a movie directed by the guy who infused “Hairspray” with such boogie inducing fun one couldn’t help falling in love with it.

I think the biggest flaw with “Rock of Ages” (based on the popular stage musical) is that it’s really just a list of well-known songs in search of a story to tell. Every time the characters engage in dialogue or something resembling a plot, you wish they’d just start singing again. Every story element is something you’ve seen before – but at least the film is very much aware of this – girl from the Midwest in search of fame, the rockin’ nightclub that faces foreclosure, and the aging rock star in need of once last chance of redemption. It even features, shock, a budding love story with young lovers who must overcome a hurdle of misunderstanding. Every cliché is accounting for, but who cares? It feature some rocking music and some pretty enjoyable performances.

Want a real reason to see this thing? Two words: Tom. Cruise. It’s Tom Cruise like you’ve never seen him before. He gets extra points for just showing up in this thing and sells the crap out of it. He plays Stacee Jaxx an aging rock star who’s about to split from his rock band ‘Arsenal.’ He’s really weird and drunk a lot. He even travels with a baboon. (It gives a rather impressive performance as well) What’s with rock stars and primates anyways? He’s going to be performing at the famous Bourbon Room on the Sunset Strip (think Whiskey a Go Go). The guys who run the Bourbon Room are Dennis and Lonny (Alec Baldwin and Russell Brand respectively) and they’re facing a slight debt problem. Meanwhile a young woman named Sherrie (Julianne Hough) breezes right off a bus from Oklahoma, gets her suitcase stolen within five minutes of arriving (ala Nomi in “Showgirls”) and meets Drew (Diego Boneta) who also works at the Bourbon Room and has dreams of rockin’ out as well. Meanwhile a senator played by Bryan Cranston and his wife Catherine Zeta-Jones want to protest the Bourbon Room because rock-n-roll is evil and all that jazz. Snooze. This subplot is needlessly shoehorned in here to pat out the film’s already slightly overlong runtime.

But who needs plot when you have some big name stars belting out great tunes like “Sister Christian,” “Pour Some Sugar on Me” and “Here I Go Again.” One of my favorite sequences, which was all too brief was a great mash-up of “We Built This City” and “We’re Not Gonna Take It.” Director Adam Shankman knows most of these songs are cheesy and fun and he just sells it – and surprisingly imbues a strong scent of sexuality that dares to push the boundaries of the PG-13 rating. The musical numbers have the most spirit and energy and are staged reasonably well. Everyone looks like they’re having fun and that’s important when you’re in a movie musical called “Rock of Ages.”

“Rock of Ages” isn’t really anything new. It’s doesn’t quite set the bar any higher for movie musicals (or more specially “jukebox musicals”) but it’s a lot of fun and features some good performances and some decent laughs as well. The film’s plot is sort of all over the place and full of clichéd tripe you’ve seen countless times before, but I guess every rose has its thorn.  GRADE: B
Posted by Chris at 12:07 AM

Once you are choosing the muscle building routine you will do,
it is best to concentrate first with the exercise regimens that will target the large
muscles in your body. To promote muscle growth the number of grams of protein you should eat should be approximately 1.
Whey protein-powder supplements help the muscles to grow, but the exercise
regimen needs control to get maximum benefit.