Goop Dreams: The Gripping Thriller “Prometheus” is Sci-Fi Horror at Its Best 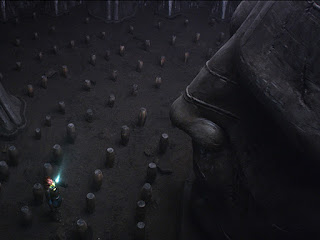 “Prometheus” might just be a modern sci-fi horror classic. This “Alien” prequel is Ridley Scott’s best film in nearly a decade and lets us forget about that boring “Robin Hood” movie that came a couple years ago. It’s been one of the most anticipated and talked about films in a while. And not surprisingly it’s also become one of the most divisive. Some found the film to be poorly conceived with a muddled script and confusing mythology. Others have found the film a captivating return to the world of “Alien” with thrilling moments and fascinating mythology. I found myself in the latter category. I found it to be a rousing adventure, reminding me of the first time I saw “Jurassic Park” in the theater as a child. And the film is similarly structured: it begins as thoughtful exploration of science and ends up as a rip-roaring horror thriller. It’s sort of the scarier version of “Contact” or “2001.”

The basic story of “Prometheus” revolves around a team of scientists on a mission to a distant planetoid to possibly determine the origin of life on Earth. Elizabeth Shaw (Noomi Rapace) and her fellow scientist/lover Charlie Holloway (Logan Marshall-Green) find several unconnected ancient cave drawings which they determine were made years earlier by an unknown alien species. They believe this species, which they refer to as the “Engineers,” are the ones responsible for life on Earth and see these drawings as an invitation to come meet them. The Weyland Corporation, headed by the late Peter Weyland (Guy Pearce in old age makeup and hologram form), has funded the mission which is headed by the rigid and seemingly unenthusiastic Meredith Vickers (‘Ice Queen’ extraordinaire Charlize Theron). Also among the crew is an android named David (Michael Fassbender). Needless to say what the crew of Prometheus find when they get there isn’t quite what they bargained for.

It’s impossible to explore more of the film’s plot without avoiding spoilers, so take this as a warning if you haven’t seen the film. Shaw and the team find a decapitated alien corpse in a structure on the planet. It seems as though these Engineers are extinct. They also find a room full of metal canisters that contain a mysterious black goo. This goo appears to mutate whatever comes in contact with it, which leads to some rather disgusting horror movie moments that are just as effective as anything seen in the previous Alien films. Before we know it certain characters have become infected with this substance which leads to a serious of unfortunate events that lead to what just might be the creation of the alien species we’ve come to know and love from the Alien films. And speaking of which, anyone who doesn’t find the “surgery scene” disturbing and squeamish has obviously seen “The Human Centipede II” way too many times (for the record I’ve only seen it once). This scene alone might instantly become one of the most unsettling scenes I’ve seen in a film in quite a while. I haven’t seen a sci-fi thriller this intense, exhilarating and flat-out entertaining in a long time.

“Prometheus” seems to just get everything right. Noomi Rapace is a wonder. Having not seen her Dragon Tattoo films nor the Sherlock Holmes sequel, this is my first experience with her as an actress. She gives a pretty kick-ass performance. Her character refuses to quit despite having an unplanned, um, surgery, halfway through the film. The wonderful Michael Fassbender, as the android David, is a revelation. He’s just as good here as he was in last year’s criminally under-nominated masterpiece “Shame.” As David, he wanders the empty corridors while the human crew is in hypersleep awaiting arrival to LV-223. Like Wall-E, he watches Hollywood movies (even mimicking Peter O’Toole’s blonde hairdo in “Lawrence of Arabia”). Writers Jon Spaihts (a newcomer) and Damon Lindelof (the 'Lost' guy) have crafted such an interesting concept and story and they are purposely vague on several plot details which I didn’t find annoying whatsoever. What exactly is the black goo? Who made the Engineers? Why did they create humans and then want to destroy them? How does the alien get to LV-426? And what exactly is David’s deal anyways? When things are ambiguous on purpose it encourages fun discussions after seeing the film. This is a thinking person’s sci-fi movie and you’re all the better for having witnessed it.

The movie is also a technical wonder. It features breathtaking cinematography (check out that opening sequence in IMAX 3D!), beautiful art direction with not-so-subtle hints at previous Alien production design, a terrific music score, and some awesomely squeamish and realistic special effects. Ridley Scott has crafted such an original movie filled with wonder and excitement (and an intense sand storm sequence). It’s certainly not something that everyone will enjoy but those who are looking for a great adventure and two hours of meditative yet action-packed thrills need look no further. It's one of the year's best.  GRADE: A
Posted by Chris at 11:05 PM

Nice post! This is a very nice blog that I will definitively come back to more times this year! Thanks for informative post.Dramanice

melaniefinn said...
This comment has been removed by the author.
12:47 AM