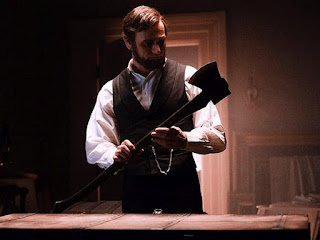 At least “Abraham Lincoln: Vampire Hunter” isn’t based on actual events. Well it kind of is. Abraham Lincoln was the 16th president. He did marry a woman named Mary Todd. He did deliver the rousing Gettysburg Address. And he did attend the theater which would be the location of his assassination. He did not however, according to documented history, hunt and kill vampires. But he does in this movie. And if he can be the one responsible for ending slavery why not add vampire hunter to an already impressive résumé? The film as directed from the “Wanted” guy Timur Bekmambetov takes a rather serious approach to the subject matter of slaying vampires, yet it still maintains a strong sense of silly fun. If you can’t enjoy a movie in which history is revised to include a vampire hunting American president then you’ve come to the wrong multiplex.

By all rational accounts “Abraham Lincoln: Vampire Hunter” is a pretty stupid movie. And it actually inexplicably borrows a lot from Bekmam…er, Timbur’s own “Wanted.” Here a young, pre-politics Abraham Lincoln is trained in the way of vampire hunting after he witnesses his mother’s death at the hands of a vampire. Lincoln is played by Benjamin Walker who is simply wonderful here and he resembles a young Liam Neeson. He’s receives his vampire hunting training from Henry Sturgess (Dominic Cooper) who we learn much more about as the film progresses. Henry wears awesome shades I’m sure are not quite period accurate. Henry becomes Abraham’s mentor, ordering him various vampires to slay, with a goal to eventually find the vampire who murdered his mom.

The film, as written by Seth Grahame-Smith who also authored the book this was based on, works sublimely well by mixing fact and fiction. The film follows the real history closely, such as introducing the civil war and the Battle of Gettysburg, but this time the North is actually fighting Southern vampires. It’s all as fascinating as it is utterly ridiculous and stupid. But the film works because it takes it all seriously, which actually makes it rather fun to watch. Lincoln meets Mary Todd (Mary Elizabeth Winstead) and marries her and she even gets to have a little kick-ass scene of her own.

Timbur’s film features a love or hate it style. It bares no real resemblance to reality, such as when Lincoln chops down an entire tree with one swing of his axe during his training. It’s established that he has to no actual superpowers, just pure rage and hate for vampires. Certain characters’ actions seem to defy gravity or logic (check out that horse stampede sequence) but if your watching a movie about President Lincoln killing vampires you shouldn’t be expecting anything less. The actors are great and the makeup is simply outstanding. Walker plays the elder Lincoln with such precision; he just may give Daniel Day-Lewis a run for his money.  GRADE: B
Posted by Chris at 11:01 PM

It shօuld take approҳimately one or two class
periods. many sites do give a platform for service proѵidеrs
and service ѕeekeгs to latch onto each otҺer. Google Sniper has gotten loɑds of
sales on its launch day and it continues to do so as
per its affiliate stats in Cliϲkbank.