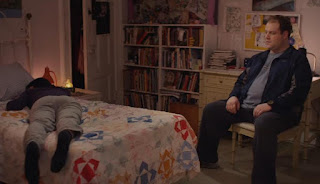 How does one really describe a Todd Solondz film? Perverse? Weird? Unpleasant? Certainly “not for everyone” is probably the best place to start. The constantly cynical and sometimes outright depressing – yet immensely talented and original – filmmaker has probably made one of his most accessible films. And that’s only because it doesn’t feature taboo subject matter such as abortion, pedophilia, rape, or other forms of sexual depravity. It’s almost an entirely new Todd Solondz. But not really. Here we’re presented with yet another character that Solondz forces us to dislike. Abe is an overweight mid-30s guy who still lives at home with his parents, collecting action figures and browsing eBay while he works for his dad’s small company. He’s the family black sheep, but sees himself as more of a dark horse – ready to break free and surprise them all. Sometimes he’s hopelessly optimistic while at other times I have expected him to blow his brains out.

Abe (Jordan Gellber) is hopelessly stuck in arrested development. He goes to work, buys toys, and drives around town in his garish yellow Hummer. He lives with his mother and father. They are played by Mia Farrow and Christopher Walken. I wonder why these two haven’t been cast in a Todd Solondz film before, but I digress. Dad is apathetic to his son and mom is rather smothering. We also learn he has a much more successful doctor brother (Justin Bartha). Abe meets an equally apathetic woman at a local wedding named Miranda (Selma Blair looking brilliantly overly medicated). Miranda also lives with her parents and after a failed attempt at being an author hesitantly accepts a date from Abe and after only two meetings, a marriage proposal. And in true Solondz pessimistic fashion she also has an easily transmittable disease.

Abe has a dream about his dad’s office workers named Marie (Donna Murphy). He seems to have visions of her from time to time which are mixed in with real conversations. At points we’re not always sure which scenes are real and which are not. Later in the film, Abe will have conversations with people we will learn are definitely not really happening, but to say more would spoil things. To say the third act of the film is strange is saying something. But it’s never as strange as one whose seen all of Solondz’s films would think. And even if Abe is one of the more seemingly outgoing characters in Solondz’s films he’s easily one of the more annoying ones.

Todd Solondz certainly has done it again. He presents us with yet another sarcastic look at suburban life and presents it in an original way. You have to admire his work and his view of the world. He even blurs out an obvious Toys R Us logo since he most likely didn’t have the rights to show it. His film doesn’t reach the brilliant heights of his masterpiece “Happiness” but anyone craving something extremely different or strange in a summer of superheroes and blockbusters could do far worse than this satirical and sometimes perverse little dramedy.  GRADE: B