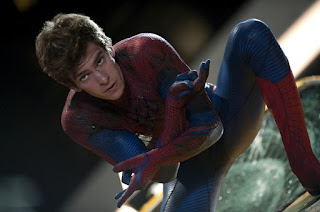 Should it really be impossible to compare this new Spider-Man “reboot” to the original trilogy that ended just five years ago? It kind of is. This new version, from the director of inventive director of “(500) Days of Summer” Marc Webb, tries to spin webs around its original inspiration and it pretty much succeeds. What we have here is a much more deep and fleshed out origin story of geeky Peter Parker’s transformation into web-slinging superhero Spider-Man. Sam Raimi’s take in the original 2002 film was fun and fresh and dazzling, as was his follow and the much maligned closing chapter (which I found as entertaining as it was flawed). Even if “The Amazing Spider-Man” has a slight whiff of “does this need to exist?” it succeeds admirably with a stellar story, great performances, and exhilarating action sequences.

“The Amazing Spider-Man” was born after plans for a fourth Spider-Man film fell through. The studio decided to back to the basics and even if this is a story we saw being told ten years ago, it’s different enough to warrant a second go round. It follows the “Batman Begins” formula by starting over from scratch with a new cast and director after a critically slammed previous entry. Call it “Spider-Man Starts,” if you will.

Here everything that should be old and familiar feels fresh and invigorated. Peter Parker is now played by The Social Network’s Andrew Garfield (can someone please cast this guy in a “Psycho” reboot already?) who actually fits the role much better than Tobey Maguire. He feels more like an outcast from the get go even if the actor himself is himself a rather good looking dude. He’s lived with his Aunt May (Sally Field ) and Uncle Ben (Martin Sheen) ever since his parents abandoned him when he was a kid. In a prologue sequence we see that Mr. Parker is in some sort of trouble, which begins the film’s overall mystery story arc.

Meanwhile, as the high school Peter begins digging deeper into his parents’ past he ends up in the high rise corporate tower of the Oscorp company where his father’s former college works Dr. Curt Conners (Rhys Ifans). It also just so happens to be where his beautiful crush Gwen Stacy (Emma Stone) interns.  Parker is led to a room filled with “genetically altered super spiders,” to borrow a term from the original film, where he’s promptly bitten and begins gaining spider-like abilities. Comic fans will rejoice knowing that once he begins to hone his new superpowers, Peter constructs his own man-made web slingers which help him leap from building to building. Peter’s development of power is handled way much more in-depth here as opposed to the traditional montage format. Peter’s newly developed powers are wonderfully balanced with his growing romance with Gwen. Stone and Garfield have such a palpable chemistry and Webb uses his indie rom-com cred to maximum effect. I also enjoyed much more screen time for Uncle Ben and Aunt May at Peter's home. Sheen and Field are simply excellent here.

But what do people really want in a Spider-Man flick? How about some amazing high-flying web-slinging action? This movie certainly delivers in that department with a few really cool uses of 3D technology. Seeing Spider-Man soar through the sky (aided by a wonderful James Horner score) will never get old, even if this is the fourth time. Spider-Man’s action scenes involving Curt Connors, after he incidentally turns himself in a giant CGI lizard after experimenting on himself, are pretty awesome. But the movie isn’t all just cool computer graphics. Plenty of practically effects are utilized and the characters are extremely well drawn. Screenwriter James Vanderbilt, who brought such great character depth to David Fincher’s Zodiac, is in top form here, as are Alvin Sargent who worked on the original films and Steve Kloves who wrote most of the Harry Potter films.