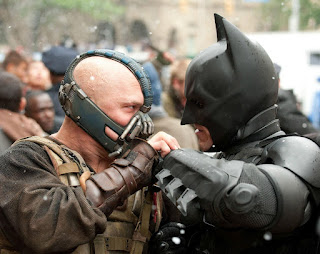 Boy does Batman, and Bruce Wayne for that matter, have a lot of rising to do. After the events of “The Dark Knight” Batman branded a criminal on the run after taking the heat for the crimes of Harvey Dent, who was acknowledged as a hero in a cover-up that ended up actually cleaning up Gotham City into a state of peace. But that certainly won’t last very long as this third dip into the Batman well by director Christopher Nolan has something so epic and gigantic in store for Gotham I’m surprised the entire world doesn’t explode in proper Michael Bay fashion. It’s amazing how well Mr. Nolan stages intense action without ever once making it seem just loud and obnoxious. Sure it’s loud, but it’s not headache inducing. The last hour of “The Dark Knight Rises” is so intense and action-packed and thrilling I’m amazed at how swiftly it actually moved along. This is a defining film in a groundbreaking series that will certainly go down in history as one of the finest motion picture trilogies of all time. And I’m not even a big fan of “Batman Begins.”

As we learned from Randy in “Scream 3” about movie trilogies, the third chapter is always about going back to the beginning. Which “The Dark Knight Rises” does a lot. A strong background in the previous films is sort of a must, but not necessarily a requirement. Everything that I sort of found rather dull and lifeless about the first film is luckily brought back here with excitement and intrigue. We know that the supposedly deceased Ra’s al Ghul (Liam Neeson) had created the League of Shadows with intent on destroying Gotham City. Enter Bane.

Bane, a disturbing, hulking criminal mastermind played with bulky authority by Tom Hardy, has plans to turn Gotham completely upside down. After a breathtaking opening sequence featuring a jaw-dropping aerial stunt, Bane is released with intent on causing chaos in Gotham. He attacks the Gotham City Stock Exchange putting not only the city but Bruce Wayne in financial crisis and even takes over his science division and all his fancy gadgets one of which he turns into a nuclear weapon of mass proportions. He even goes as far as taking the ENTIRE CITY hostage, cutting millions of people off from the outside world (where the President says they have a strict no negotiating with terrorists policy) and creates an anarchic police state where all the policemen are trapped in a tunnel and all the criminals are let out into the street. Oh and Bane severely cripples Batman in some hand-to-hand combat and locks him in away in a foreign prison that is virtually impossible to escape from. But fear not Batman fans, Batman makes just enough appearances that will make you swoon with excitement. His vehicles and gadgets this time around are even more fun and exciting, and unlike the previous films, you feel as if things are way more at stake, which makes the film even more thrilling and exhilarating than you could imagine.

This movie is dark and depressing sure, but Christopher Nolan has created an anomaly: because this movie is so much freaking fun. It’s just as gritty and violent as “The Dark Knight” with strong echoes of other gritty crime dramas inspired by the Martin Scorseses of the film world, yet it’s completely his own. The film is further boosted with the appearance of cat burglar Selina Kyle, moonlighting as Catwoman, who has a great talent of taking things that don’t belong to her. Anne Hathaway plays her fiercely and as cold and calculating as she can be, she’s actually quite a likable character. She boosts the film with a much needed sense of fun. And a sense of hope is boosted with the appearance of Joseph Gordon-Levitt as John Blake a young cop who Commissioner Gordon (Gary Oldman) promotes to Detective after suffering an injury from Bane. The first half of the film has much to do with setting up the chaos that will occur in the film’s stark second half, which can be a bit muddled at times – as someone who doesn’t quite get Wall Street politics and financial stuff – which is just more slightly confusing, which isn’t so much a criticism as it is a personal observation.

Nolan, who co-wrote with his brother Jonathan from a story by David S. Goyer has laid everything out on the table with this one. Nothing is off limits here. There are plenty of great surprises for fans of the series and even if the film doesn’t feature the scene-stealing work of Heath Ledger’s Joker, this film has just as much, if not more, to offer. It has such a crowd pleasing and altogether satisfying ending, I’m truly amazed. The film has such great camera work featuring beautiful IMAX photography, a deliciously bombastic score from Hans Zimmer, and truly outstanding stunt work and effects. It’s certainly the reason we escape to the movies in the first place.  GRADE: A
Posted by Chris at 10:28 PM

I was in search of this. Truly refreshing information. Thank you.

Amazing! Its in fact awesome piece of writing,
I have got much clear idea on the topic of from this post.


Have a look at my web page: megapolis wiki production ()