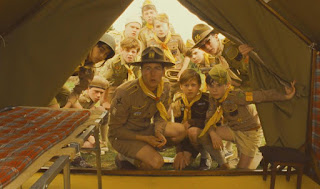 Wes Anderson is one of more talented auteurs working in the film industry today. However, he’s not exactly everyone cup of tea. And that includes me. You can look at a single frame from one of his films and be able to identify who directed it. He has an original and quirky style. He feels like the hipster version of early Tim Burton. But as original as his films are, they sometimes have an overwhelming sense of pretentiousness behind it which always leaves a bad taste in my mouth. His sets, camerawork, characters, and dialogue, especially in his latest endeavor “Moonrise Kingdom,” all draw way too much attention to themselves, as if to say, “Hey look at me!” Having said that, fans of Anderson’s peculiar style will no doubt be in awe at the originality and dry sense of humor proudly put on display here.

“Moonrise Kingdom” takes place on a remote New England island in the 1960s. Anderson’s films are always presented as if they a story unfolding before us. A young boy named Sam (newcomer Jared Gilman) is a khaki scout but he’s sort of done with them. He decides to run away into the woods with a girl named Suzy (another newcomer Kara Hayword). The two had become pen pals and are eager to run away from society. Sam is an orphan, and his foster parents don’t really want him anymore. Suzy comes from a family in which she’s become less important than her three younger brothers. And her bullhorn wielding mom (Francis McDormand) appears to have eyes for the local police captain (Bruce Willis).

A search party is deployed to find the missing youths including Scout Master Ward (Edward Norton) and the other boy scouts, all of whom have particular and appropriately weird personalities. A few of the boys build a tree house in a tree nearly five stories high. The boy scout camp is run as if it were a youth centered boot camp. The film does focus a lot on Sam and Suzy’s “escape” and how Sam uses his knowledge as a scout to help them survive in the woods. In true hipster fashion, Suzy brings along her portable record player so she can listen to her favorite album.

Like Wes Anderson’s films, the humor is brought out through the odd characters and strange situations they find themselves in. This is the type of movie where characters will get struck by lightening and survive. And animals will be killed by a bow and arrow. Anderson and his co-writer Roman Coppola, have a crafted a cute central love story between to young budding adolescents. They have done a good job at successfully recreating the awkwardness of that time and place. They two youths are great and fit naturally into a quirky semi-real fantasy world with oodles of bizarre characters including Tilda Swinton who’s simply referred to as “Social Services.”

This is certainly a Wed Anderson film through and through. He’s crafted an interesting film that is certainly his own, and all the actors do a great job of fitting into his world, but its weird style and slower pace is not something that will satisfy all tastes. He manages some decent laughs that come about from the sheer weirdness on display, but those who aren’t strict fans of his oddball style will certainly feel alienated and turned off. It’s not one of the most entertaining films of recent memory but it’s certainly one of the strangest.  GRADE: C+
Posted by Chris at 9:26 PM

In accordance to such sites, the code generators create cost-free Xbox Stay codes, which give the end users a likelihood to take pleasure from the no cost Xbox Dwell Gold services.
By knowing secret spots you are able to hide out and
kill your enemies before they even know you're there. This would induce the site being taken down as
well as the distribution from the program being barred.

I was curious if you ever thought of changing the page layout
of your blog? Its very well written; I love what
youve got to say. But maybe you could a little more in the way of content
so people could connect with it better. Youve got
an awful lot of text for only having one or 2 images.
Maybe you could space it out better?