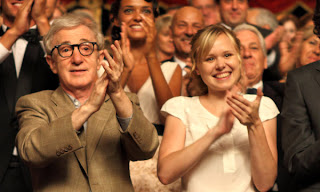 Woody Allen’s “To Rome with Love” feels a lot like his “earlier, funny movies” but isn’t quite as successful. At least it doesn’t reach the overbearing pretentiousness of his previous entry, last year’s Oscar-winning “Midnight in Paris.” Luckily, this time you don’t have to be an English major to get the jokes. It’s certainly a lighthearted confection and even though Allen himself finally shows up in front of the camera - for the first time since 2006’s underrated “Scoop” - something is still just missing. “To Rome with Love” is Allen’s fourth stop in his European filmmaking tour (after having made films in England, Spain, and France), and as beautiful as the surroundings are he still feels rather uncomfortable in a foreign location. The film tells four separate stories that are intercut with each other but unrelated, which sort of makes the film feel like the Italian version of “Paris, je t’aime.” All of the stories have some kind of silly or whimsical element which was jarring at first yet encouraging as Allen knows how to handle this type of material well. If the storylines managed to be a whole lot funnier then it would have been an even greater success.

The first story involves Woody Allen as Jerry traveling to Rome with his wife Phyllis (Judy Davis) to meet their daughter Hayley’s (Alison Pill) Roman fiancé Michelangelo (Flavio Parenti). As you can imagine the two families sort of clash at first, especially when Jerry, who is retired from the music industry insists that Michelangelo’s father is a brilliant opera singer when he hears him singing in the shower. This leads to one of the film’s more silly situations which finds the guy performing onstage while showering. Allen has some great trademark Woodyisms, but he must share the film with three other plotlines which severely limits his screen time.

Another storyline involves Jesse Eisenberg as Jack an American pursuing an architecture career and living with his girlfriend Sally (Greta Gerwig). He meets John (Alec Baldwin) who Jack recognizes one day as a well-known American architect. He invites him over for coffee and then John proceeds to show up, like a spirit or something, whenever he feels like it to offer advice to Jack. Sally’s best friend Monica (Ellen Page) flies to Rome to move in with them and causes a slight rift in Jack’s relationship. Monica is sort of the fiery young thing that usually gets awards attention in Woody Allen films, but the character isn’t wild enough to get much notice and Page reduces the amount of pep she usually infuses her characters with.

Another story involves the once hot commodity Roberto Benigni as an ordinary family man who becomes famous one day for no apparent reason. The paparazzi and reporters begin following him around 24/7 to watch him shave and ask him what he eats for breakfast. Woody Allen explored this concept a while back in his film “Celebrity” and it’s perfectly cast as Benigni had his fifteen minutes of fame back when he won an Oscar for “Life is Beautiful” and as quickly as he came he was nearly forgotten about. Although that could have been “Pinocchio’s” fault.

And lastly that leaves us with a story about two Italian newlyweds Antonio and Milly who become accidentally separated one day while in Rome to meet the in-laws. Penelope Cruz plays an Italian hooker named Anna who shows up at the wrong place at the wrong time so Antonio temporarily passes her off as his fiancé. Meanwhile, Milly becomes infatuated with an Italian movie star and we wonder if Milly and Antonio will ever find each other again.

It’s made quite clear that these four stories pretty much have nothing to do with each other except that they all take place in Rome, but that’s ok. The point is that Allen has attempted to make a comedy in another city he’s not quite familiar with. And a majority of the film is actually in the native language, which makes it feel more authentic. It’s not his funniest or sharpest or most original film he’s ever created, but it has a fun and lighthearted tone. For a guy who’s almost pushing 80, you can’t really fault the guy whatsoever.  GRADE: B
Posted by Chris at 10:47 PM

Magnificent site. Lots of helpful information here. I'm sending
it to a few buddies ans also sharing in delicious. And
of course, thanks to your effort!

I would like to express my appreciation to you and your John staff for making our holiday and wedding anniversary at the Conrad Maldives an exceptionally memorable one. The staff has been superb, most notably... Amazingly island resort hotel with numerous varied restaurants, good food, relaxing Spa, unique underwater restaurant and fantastic service.