A Bear to Remember: The Hilariously Subversive “Ted” is Irreverent Comedy Gold 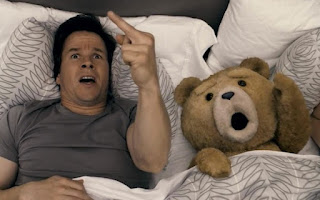 Ted is about a talking teddy bear. Yes, a real teddy bear that walks around and talks. And people interact with him as if it were completely normal. This is a high concept film if there ever was one. And yet the film tries, seemingly effortlessly, to let you buy into it. And it works. It really, really does. And on top of it, it’s endlessly hilarious. It was directed and co-written by Seth MacFarlane, the usually irreverent yet hilarious guy who brought you “Family Guy.” He’s the type of creative artist who doesn’t always follow the rules and in so doing always breaks the mold and comes up with things no one has eve really seen before. I’m not a huge fan of “Family Guy” but what I have seen is fun, original, and delightfully tasteless at times. He brings all of that here to his first live action feature where he introduces us to Ted, the very much alive teddy bear companion of Mark Wahlberg’s character. It’s sometimes ridiculous and even touching yet always hysterical. And just because a movie features a talking teddy bear doesn’t make it kid friendly. Get a babysitter.

“Ted” begins as if it were going to be a serious drama as it’s narrated by the British Patrick Stwart, but the laughs begin almost immediately. A young boy named John has trouble making friends so one Christmas he wishes for his new stuffed teddy bear to come to life. This is one of those movies in which a child’s wish comes true. His new friend Ted becomes his best friend, much to his parents initial horror, but Ted becomes something of a celebrity. He makes appearances on talk shows with Johnny Carson, which employ some Forrest Gump-like impressive effects. But like most instant celebs his fifteen minutes of fame end and John is stuck with this talking bear right up through adulthood. Now, decades later Ted is a foul-mouthed, pot-smoking  stain in John’s life, but they’re actually still best buds. Of course it makes John’s relationship with his girlfriend Lori (Mila Kunis) rather strained.

There’s not much going on here plot-wise (except for a slightly strange yet funny third act plot point involving a very creepy Giovanni Ribisi) which is probably a good thing. The film would rather spend time getting to know these characters and how they go about their lives. You really get a good sense of John and Lori’s romance and how Ted has started to affect their relationship. John is essentially a giant man-child, someone who’d fit right at home in a Judd Apatow production. But this film is way more foul-mouthed and ridiculous. In the best way possible, of course. The film features plenty of Family Guy style asides and references to pop culture and even features a significant plot device revolving around the film “Flash Gordon.” And bonus points for that amazing “Airplane!” reference. There are plenty of fun celebrity cameos which also add to the fun. The film ultimately feels like a big budget sitcom packaged as a summer comedy, but that’s not really an insult. The laughs are earned and warranted and there’s just enough emotional connection with the characters to make the humor even more funny and relatable.

It’s quite disturbing how much you get sense of how codependent John and Ted are with each other. There’s actually a quite interesting character study going on here masquerading as a silly foul-mouthed guy comedy. There is certainly no joke too offensive ALS group has already criticized the film for an on going Lou Gehrig’s disease joke used in the film. Usually anything goes when it comes to comedy, and Ted pushes it to comedic new heights. What also helps sell this fascinating friendship amongst the potty humor is the terrific GCI animation. Ted is extremely lifelike, and much like last year’s single titled comedy “Paul,” features a wonderful central animated performance (voiced by MacFarlane).

“Ted” is certainly one of the funniest movies to come out so far this year and it features some terribly subversive humor. Those who love to laugh and are not easily offended will find themselves having a surprisingly enjoyable time. It’ll have you roaring with laughter and leave you feeling all warm and fuzzy inside.  GRADE: A-
Posted by Chris at 11:27 PM

Taking from that, Juan is also influenced by artists like Jean-Michel
Jarre, Enya, Moby, Bjork, Crystal Method, and many other pioneers in this style.

· For more information on other great artists, check out
my Canada Music Examiner homepage. It seems like that must have come with an enormous amount of pressure.

And when you begin tossing $20 at clientele for spreading the word about your DJ business, they will commence marketing for
you a lot more often. At the same time, in the same interview,
Takaya Imamura stated that "the story ends here", which
has thrown some fans for a loop. Kanye West – “Heartless” Mixed With Lady Gaga – “Lovegame”.