Election Daze: Vote Yes for the “The Campaign” 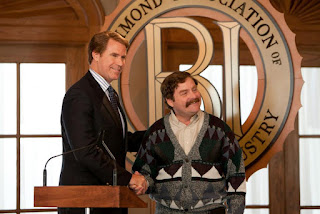 It’s about time that funnyman Zach Galifianakis went head to head with other funnyman Will Ferrell. Of course Mr. Galifianakis borrows heavily from the other weirdly bizarre characters he’s played in movies like “The Hangover” and “Due Date.” His character here may be even weirder and that’s saying something. He’s Marty Huggins, a quirky, loving family man tour guide of his small hometown in North Carolina. He’s urged to run for office against incumbent Congressman Cam Brady (Ferrell) who’s running unopposed by a pair of greedy businessmen who want sell the district to China to “insource” foreign sweat shops to the US. It’s certainly a crazy idea that is wonderfully satirized in this funny lampoon that skewers the entire election madness that hits America every November.

“The Campaign” is one of the few original movies that have come out this summer. And when I say original, I mean it’s not based on a comic or a book or any kind of sequel or remake. That doesn’t necessarily mean it’s the most original however. Political satire is not a new thing even remotely but the film does take a rather humorous (and completely farfetched) look behind of the scenes of two candidates who’ll do pretty much anything to win. And political parties don’t even matter here. Ferrell’s Cam Brady is a democratic and he spouts out the typical conservative mumbo jumbo about America and Freedom. Because those have become words to live by with politicians these days. When Marty’s campaign manager shows up (played wonderfully by Dylan McDermott) he tells Marty to get rid of his two shih tzus because they are “un-American.” He reinvents Marty as an American-loving tough guy who’s set to “clean up” Washington. Some of this stuff actually doesn’t seem so farfetched now that I think about it.

The laughs come mostly at the funny interactions between Cam and Marty and as the election begins to heat up. Cam does some rather dirty things to get votes. He even seduces Marty’s wife and releases a sex tape to tarnish Marty’s reputation. I’m pretty sure having your own sex tape is not what a politician would want. But that’s the type of movie this is. I kind of enjoyed seeing Dan Aykroyd’s return (where’ has he been?) and he works well with John Lithgow as the scheming brothers who use poor Marty like a puppet. Sometimes the satire is a little obvious but the movie would rather be funny which it certainly succeeds in numerous times. And the writers Chris Henchy and Shawn Harwell are way more interested in getting the best possible laughs than being politically correct (ie, baby punching, nip slipping, dog punching etc).

Despite the fact that it’s not the most original or smartest comedy to come out in a while, director Jay Roach (“Austin Powers” and “Recount”) helps make the film win you over despite its minor flaws. It’s certainly not the most overall funny movie this year (that belongs to Wanderlust) but it offers some supremely funny moments. If you’ve ever wanted to see an Asian housekeeper who is forced to act like a sassy Black southern maid, then you’ve come to the right movie. Her scenes are worth the price of admission alone.  GRADE: B
Posted by Chris at 8:02 PM

Hi there very cool web site!! Guy .. Excellent ..
Superb .. I will bookmark your website and take the feeds additionally?
I'm satisfied to search out a lot of helpful information here in the post, we'd like develop more strategies in this regard, thanks
for sharing. . . . . .

I know this if off topic but I'm looking into starting my own weblog and was curious what all is required to get set up?

I'm assuming having a blog like yours would cost a pretty penny?
I'm not very web smart so I'm not 100% sure.
Any tips or advice would be greatly appreciated. Many thanks

I was very impressed by this post, this site has always been pleasant news. Thank you very much for such an interesting post. Keep working, great job! In my free time, I like play game: redball4games.com. What about you?