ParaNorman Activity: The Stop-Motion “ParaNorman” is a Wonderful, Visual Treat 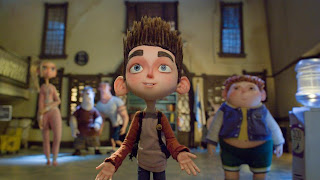 It’s good to see that stop-motion animated movies are still being made. It seems like such a primitive and tasking filmmaking method, but one that comes with tremendous reward. It’s a type of animation that feels tangible. It feels authentic and it’s wild what some truly talented people can do with it. Take for instance the people behind its latest effort “ParaNorman.” It’s a wildly fun tale about a young boy who sees ghosts all around him and how he must save his town after unwittingly unleashing a witch’s curse upon the townsfolk. It’s a wonderfully audacious and eye-scrumptious endeavor from the people who brought us the equally stunning, but way less rewarding "Coraline"; and to think Tim Burton had nothing to do with it.

“ParaNorman,” even though it’s animated and rated PG, isn’t just a kid’s movie. In fact, adults may be surprised to find it chock full of brief adult moments that will most likely fly swiftly over most young peoples’ heads. It even reveals something about a particular character of which I’ve never before witnessed in an animated film. The filmmakers certainly had the guts to make this film, and they even show some up on screen. The movie opens wonderfully with a film within a film zombie movie, which is being watched by our young hero Norman (voiced by Let Me In’s Kodi Smit-McPhee). He talks to his dead grandmother’s ghost. He’s an outcast and a major disappointment to his parents – especially his father. His sister Courtney (voiced by Anna Kendrick), living 24/7 in her bright pink velour tracksuit, is more concerned with her hunky crush Mitch (Casey Affleck) than her younger brother who’s she has to babysit one night. Mitch’s younger brother, the equally outcast Neil, and Norman set out to save the town after a creepy vision and visit from his eccentric dead uncle.

Soon the young pair of misfits, Courtney and Mitch, and the school bully – an odd team if ever there was one – are being chased by zombies. These zombies are centuries old townsfolk who put a witch to death and have come back to haunt the living. But there’s a lot more to the story which would be silly to reveal here. It’s really a strange mix of “Hocus Pocus” and “The Goonies.” And it’s all done with amazingly beautiful animation and some really humorous scripting. Writer and co-director Chris Butler makes his debut with such a wonderfully witty script you can’t help but become wrapped up in it. And it’s really the little details that make it fun – like Norman’s hair always popping back into place whether he combs it or it gets messed up.

“ParaNorman” is a real treat for anyone who’s a big fan of animation and scary stories. It’s really a fun horror flick for the animation crowd. There’s nothing to particularly scary here, but fans of the genre will be pleasantly surprised by the number of great references to their favorite flicks - including a rather well-known slasher score. There are no tricks here, “ParaNorman,” even in August, is certainly a welcomed treat.  GRADE: A-
Posted by Chris at 10:24 AM

Thanks for sharing your info. I truly appreciate your efforts and I will be waiting for your further write ups thank you once again.

Feel free to visit my blog; job of a financial advisor

I was very impressed by this post, this site has always been pleasant news. Thank you very much for such an interesting post. Keep working, great job! In my free time, I like play game: douchebagworkout2.org. What about you?