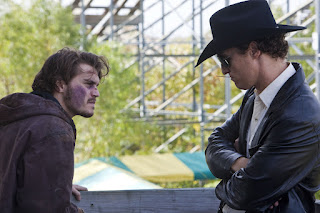 Your jaw will drop many times if you have the stomach to see “Killer Joe.” The New Hollywood 70s filmmaker William Friedkin, who is no stranger to controversy, has crafted a bizarrely garish film about a disturbingly moronic white trash family in Texas. This is the type of family who have people who want to bump each other off to get insurance money to pay off drug dealers. It’s not exactly a new concept in movies, but there are certainly things you’ll see in “Killer Joe” that you’ve never quite seen before – and probably will never want to see again. It’s almost sad that Mr. Friedkin has go to such bizarre lengths to remain relevant, but he’s managed to make some rather odd directing choices (Bug, anyone?) but he’s certainly all the better for it. It’s probably obvious that he won’t have the commercial success he had with films like “The French Connection” and “The Exorcist” and yet with as many duds as hits, he’s certainly still got it.

“Killer Joe” has found yet another wonderful role for Matthew McConaughey as Joe Copper, a grizzled Texan police detective who moonlights as a hit man for hire. McConaughey. He’s hired by who can only be described as a moronic loser Chris (Emile Hirsch). He’s a drug dealer who’s found himself in considerable debt. He schemes with his father Ansel (Thomas Haden Church) to have Joe murder Chris’ mother (and Ansel’s ex-wife) in order to collect her insurance money. Of course, Joe wants some collateral until he gets his payment so they offer him Chris’ younger virginal sister Dottie (Juno Temple). Chris’s stepmom (and Ansel’s current wife) Sharla (Showgirls’ Gina Gershon, lettin’ it all hang out) is also in on it – but to an extent that isn’t quite fully realized right away.

It’s with no surprise that we soon realize just how crazy Joe actually is and that’s the last man this dimwitted family would ever want to owe money to. Scenes with Joe certainly push the bounds of what we’ve seen in a theatrical film – and it certainly made the MPAA blush who appropriately classified the film with the “dreaded” NC-17 rating. Ms. Gershon has a knack of being attracted to this type of film, huh? As you could also guess, things don’t quite go the way the family had hoped – which gives the film a sort of Fargo and No Country for Old Men feel, although its much slimier and dirtier. This certainly is not a film for everyone’s tastes. Screenwriter Tracy Letts (who adapted from his own stage play) has delivered just the right dose of dark humor to go with the sickening proceedings. Because with a movie as extreme as this, sometimes all you can do is chuckle in disbelief. And you’ll certainly never look at fried chicken the same way again.

William Friedkin might just do for fried chicken what Alfred Hitchcock did for showering. Ok not really, but do you see where I’m going with this? “Killer Joe” is a wickedly bizarre yet competent film. It features some truly great performances, it’s certainly well-cast, and it’s so dirty and grimy - from its look and its convincing production design - you may feel the need to bathe after viewing it. Like Friedkin’s previous effort “Bug,” it’s certainly a film that will get under your skin and make you ask, “Dear God what did I just see?"  GRADE: A-
Posted by Chris at 9:20 PM

My brother recommended I may like this web site. He was totally right.
This post truly made my day. You can not consider simply how a lot
time I had spent for this information! Thanks!

I was very impressed by this post, this site has always been pleasant news. Thank you very much for such an interesting post. Keep working, great job! In my free time, I like play game: superfighters2.net. What about you?