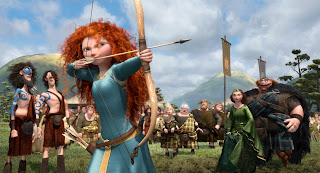 It’s funny that I thought of “Brave” as one of those “body switch” movies. You know where two characters switch places and learn some kind of life lesson. I’m thinking specially “Freaky Friday.” Here we’re presented with a mother and daughter. They obliviously love each other, but they don’t always see eye to eye. Enter in some magical spell and then said mother and daughter are forced to figure out a way to get things back to normal. It’s funny that I think specifically of “Freaky Friday” since, in a way, Disney and Pixar have sort of switched places this year. Here we have a more traditional fairy tale adventure in the style of Disney's classic animation. And later this year Disney will release a high concept comedy called “Wreck It Ralph” which seems suspiciously like something Pixar would create. In the end, this latest Pixar effort seems rather by the numbers with a few original gags and bits of heart thrown in. It’s nowhere near the horrible train wreck that was “Cars 2” but fails to really live up to the high standards of Pixar’s greatest achievements.

It’s impossible to discuss “Brave” without getting into plot specifics. So much so in fact, that the trailers and TV commercials haven’t even given away what the actual plot of “Brave” is. What you do know is that it’s about a young Scottish princess named Merida (Kelly McDonald). She has beautiful long, curly red hair. And she’s Pixar’s first central female character. Taking a cue from Disney Princesses Past, she yearns for something greater in life instead of being forced to follow the role her royal family has provided for her. A bow and arrow competition will determine who she’ll be betrothed too and what a selection it is. Seeing these goofs vie for Princess Merida’s hand is rather humorous indeed. One is a blue face painted William Wallace wannabe. One is a overplump dufus whose heavy brogue can’t even be understood. And the last is a cross-eyed goof. It’s no wonder Merida longs for something else. She wants her fate changed.

Enter the mysterious witch in the woods who just might be able to cast a spell to make Merida’s life better. Of course if she had seen “The Little Mermaid” or countless other Disney movies, she would have known better. Someone close in Merida’s life is transformed which causes a large ruckus and some surprisingly funny comedy as well. In the end though, this is really a story about a mother and daughter, a bond that cannot and simply will not be broken.

It goes without saying that the production value of this Pixar film, like all the others, is just simply gorgeous. In particular, Merida’s red hair is mesmerizingly rendered. The lush green Scottish landscapes are beautiful and all of the character designs are beautiful as well. But for all of this, there’s still something missing here. Perhaps after being release nearly two years after Dreamworks’ “How to Train Your Dragon” it sort of has a “been there, done that feel” and that’s only because Pixar trademark is its originality. I appreciate Pixar’s attempt to veer into new territory (this is also their first period piece) and if this was just another Disney release it would definitely rank up their with the early Disney classics, but this is certainly no “Finding Nemo” or “Toy Story.” It’s certainly welcome after blunderous “Cars 2” but hopefully “Monsters University” can return us to the more traditional Pixar that we all feel in love with more than fifteen years ago.  GRADE: B-

In this age of information, most of the people across the world have heavily
relied on the computers in order to help themselves
in the daily activities. They stock the very latest laptops from IBM, Dell,
Compaq, E-machines, Toshiba and more. They are
looking for good deals on electronic parts.

Got big winnings at once? Then come to us and get even more. the best gamble online only with us Win more with us.