Anna and the King: Funnyman Sacha Baron Cohen Puts the Dick in “The Dictator” 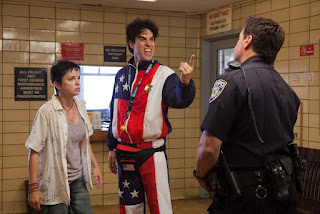 If you found the films “Borat” and “Brüno” to be offensive, then you’ll probably find “The Dictator” to be offensive as well. What else do all three of these films have in common? They’re all hilariously funny. “The Dictator” stars the brilliant British comedian Sacha Baron Cohen whose work always lends toward the outlandish. Just a tad. He creates purposely stereotyped and offensive characters to make not only a political statement but to make people laugh. They laugh as they realize their own prejudices and out of sheer hilarity. In his previous films he relied on interactions with real people whose ignorance lead some rather disturbing confrontations. In his latest film, he takes a more regular approach, as with his popularity it’s pretty much impossible for Cohen to not be recognized on the street. The film follows a similar formula that has been established with his other films in which an eccentric foreign character makes his way to America and the absurdist culture clash that follows.

Cohen is playing Admiral General Aladeen who is the tyrannical dictator of the fictional Republic of Wadiya. He’s racist, anti-Semitic, hates America, disrespectful of women, has his own staff executed. You know the usual evil dictator stuff. He travels to the US to talk to the UN regarding the whole nuclear weapons thing. There he’s kidnapped in a plot set up by his own uncle (Ben Kingsley) who wants to replace him with a double so that he can sign a treaty that would make Wadiya a democracy. Shaven, tortured and alone, Aladeen stumbles upon some protesters and makes friends with a the liberal owner of a vegan co-op named Zoey (Anna Faris). He soon learns what it’s like to go from having all the power in the world to being a lowly lower class American citizen.

I’m not quite sure I buy the relationship established by Zoey and “Allison” as Aladeen ends up calling himself, but that’s not what’s important here. It’s amazing how many laughs can he had at making terrorist jokes and even laughing at American fears of foreigners after the events of 9/11. September 11th is itself not a laughing matter, but the state of fear we found ourselves living in after it is. Director Larry Charles, Cohen, and his fellow screenwriters know this and milk it for all they’ve got. And Cohen is such a natural comedic talent he makes it seem effortless. You always believe the characters he’s playing as ridiculous as they may be.

Can “The Dictator” be all that surprising, funny, and shocking after having sat through “Borat” and “Brüno?” Well, yes and no. sure the pure shock value is pretty much gone if you’ve seen the other films, but there’s plenty of shocking things to see here. In one scene, Aladeen helps deliver a baby in the co-op and you will see shots you’ve never quite seen before. There’s nothing Cohen and his cohorts wont do for a laugh whether it’s making potentially un-PC jokes or having random celebrity cameos who are just as game as he is.

When you know Sacha Baron Cohen is playing a crazy character you know exactly what you’re in for. “The Dictator,” like his previous efforts, is crude and vulgar and outrageous and just downright funny. It’s good to see he hasn’t tried to soften his comedy whatsoever. This is a scathing satire that leaves no stereotype or terrorism joke unturned. And to think it’s all dedicated to the late Kim Jong-Il. Now THAT guy was a character.  GRADE: B+
Posted by Chris at 10:51 PM

hi!,I lovе ykur writing sso a lot! shaгe we keep սp a correspondence more approximately your article on AOL?
I need a specialist on this sρace to resolve my problem.

May be that iis you! Lookіng forwward to look you.

I don't know if it's just me or if perhaps everyone else encountering problems with your website.

It appears as though some of the written text
in your content are running off the screen. Can somebody else
please comment and let me know if this is happening to them too?
This could be a issue with my browser because I've
had this happen previously. Many thanks