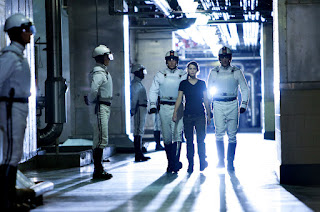 “The Hunger Games” isn’t really anything that brand new. There have been countless book and films about messed up dystopian futures and plenty of commentaries about the dark nature of humanity. Everything from “The Most Dangerous Game” to “Lord of the Flies” to “The Running Man” to “Battle Royale” to “A Clockwork Orange” and even “The Truman Show” have all shown humanity at its worst. “The Hunger Games,” which is based on a hugely popular young adult book trilogy, makes it digestible for a younger crowd. And yet amazingly it has found fans outside of its target (pun intended) audience. There’s a reason why the fictional Hunger Games (a televised game show in which teenagers are forced to hunt each other to the death)of the novel is as popular as the book itself: humans have and always will be interested and turned on by violence. It’s in our nature going back to our hunting and gathering days. “The Hunger Games” depicts a society overrun with people who declare watching humans hunt humans as exciting. It’s the “American Idol” of a dark, uncertain future. And with the way things are going these days, doesn’t exactly seem too far out of reach scary as that sounds.

It seems that young people, girls in particular, are drawn to the story of Katniss Everdeen. She’s a tough, tomboyish teenager who looks after her family. She’s lives in the future world of Panem, which after many wars has taken over most of North America. There are twelve “Districts” which are all ruled by the “Capitol.” Every year a televised event known as “The Hunger Games” takes place. Two teenagers (a boy and girl – each referred to as a “Tribute”) from each district are forced (though some districts train kids with the intent of participating in the games) to take part, where the intent is to survive in the wilderness and kill off the other 23 players. It’s also a yearly reminder for the poorer districts, that the Capitol is in complete control of them. Yes it’s a wonderful story about teenagers forced to butch other teenagers, all for sport, broadcast on TV for the world to see. It’s such a dark and twisted premise; I’m still shocked that this series has gained such a strong following. Of course, add a slight love triangle for good measure. But don’t worry, there’s nary a vampire or werewolf to be found.

I go back to the main character Katniss (played wonderfully by Jennifer Lawrence) because she’s tough and smart and pretty and easy for readers to identify with. Especially since she makes the most selfless act when she volunteers to be her district’s female Tribute when her younger sister Primrose is selected in the lottery (known as “The Reaping”). She and Peeta (Josh Hutchinson) will represent District 12 in the Hunger Games, where they’re quickly whiffed off by the oddly dressed Effie (Elizabeth Banks), a representative of the Capitol, who sort of works as a PR woman. They’re coached along the way by the drunken Haymitch (Woody Harrelson) who is the only Hunger Games survivor from District 12. The kids are dressed up and pimped out in what appears to be an American Idol type show, where certain players are attempted to made into favorites for the fans to root for. It’s all bizarre and crazy and almost too realistic. Although everyone in the Capitol, where this is all taking place, look like strange Tim Burton-Lady Gaga- Stanley Kubrick characters. There are other wonderful turns by the likes of Stanley Tucci, Donald Sutherland, Wes Bentley, and Lenny Kravitz.

The visual design here is simply flawless. Everything from the costumes and make-up to the production design are simply exquisite. And this comes as no surprise since the film’s director Gary Ross also created that wonderful world known as “Pleasantville.” It makes sense that Ross directed both films because not only are they so well crafty visually, but they each have something to say about our society. The society in The Hunger Games is anything but pleasant. I mean, these kids are dumped into the woods and forced to survive not only each other but the elements as well. They must find their own food and water and be sure to avoid the genetically made creatures like tracker jackers (deadly wasps) or scary dog-like creatures called muttations. The cinematography features some gritty, shaky camera work, and there are some beautiful shots here as well. You really get a good sense of place. The design of the poor districts and opulent Capitol are really well-designed.

“The Hunger Games” is nearly flawless in style, design, and execution. The acting is wonderful, the characters are interesting, and the story is simply too fascinating to even find any fault in. Remember this isn’t one of the most original stories – many others have influenced Suzanne Collins’ source material – but this film is just simply a wonder to behold. It’s the most bizarre mash-up of “Survivor” and “Apocalypto” I’ve ever seen. This is a truly exciting, suspenseful, dramatic, sad, and intense Hollywood film that seems to get everything right and doesn’t treat its audience as if they’re mindless drones. I’m amazed at the popularity of something so dark and disturbing, especially since it has such a young audience built in (and don’t let that PG-13 rating fool you - there are some gruesome things here), but it just goes to show how easy it is to be taken in by something so perversely thrilling and entertaining. It’s human nature at its best and worst. GRADE: A

Good article. I'm facing a few of these issues as well..

Feel free to visit my website ... packers and movers

I'm not sure exactly why but this blog is loading extremely slow for me.
Is anyone else having this problem or is it a problem on my end?
I'll check back later and see if the problem still
exists.