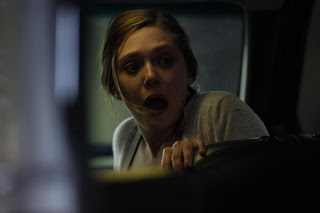 A lot of times horror films don’t offer much in terms of technical proficiency. They’re usually made on the cheap and sometimes they look it. “Silent House” is a movie made on the cheap, and while it doesn’t feature the type of cinematography seen in a luscious period piece, it features wonderful handheld camerawork that is made to appear as if it were taking place in real time. And yes, in fact, “Silent House” is made as if it were shot in a single take. “Russian Ark” this is not, as I believe there are a few hidden edits, but like Alfred Hitchcock’s “Rope” the film uses a lack of cuts to build suspense. The film works beyond its fun gimmickry in that it features a standout performance from Elizabeth Olsen, which obviously proves that good acting skills are not hereditary.

The film begins with an overhead shot looking down on a young woman standing on rocks near the water. The camera follows her along the rocks, through the grass, up to a boarded up house, where the young woman meets her father, who just drove up in his car. They proceed to talk as they wander into the house – which is all dark inside because there’s no electricity (or phone or cell service) – where they meet up with the man’s brother (her uncle) down into the creepy basement. And there isn’t one cut that I noticed. Most casual viewers probably wouldn’t even notice the lack of edits here, but once you realize how much has been going on without ever cutting away, it’s just a wonder of truly mesmerizing filmmaking.

Olsen plays Sarah who’s helping her dad John (Adam Trese) and Uncle Peter (Eric Sheffer Stevens) fix up the house so they can sell it. A young woman around Sarah’s age shows up at the house and apparently they’re old friends from when they were young. But Sarah doesn’t remember her. Later, after her Uncle leaves to go into town, Sarah begins hearing strange banging noises. Her father seems to have disappeared, until she finds him passed out with a bloody gash on his head. It appears someone’s in the house and Sarah just might be trapped. What follows is nearly an hour of almost unbearable suspense as Sarah is forced to play a cat and mouse game against a barely seen assailant. But then things become weirder and weirder and things may not just be what they appear to be.

“Silent House” no surprisingly was made from the husband and wife duo that brought us the terrifying shark thriller “Open Water.” Chris Kentis and Laura Lau have crafted a similarly claustrophobic and terrifying horror film. The camera is almost always either in front of Sarah’s face or right over her shoulder. Sometimes we can’t see anything around her and it creates almost unbearable tension. And that’s mostly because of Olsen’s impressively frightened performance. The camera appears to be entirely operated by a steadicam operator and at times the frame is as shaky as something in “The Blair Witch Project” which sometimes gives it that “found footage” feel that has come to be popular in this genre. But having everything appear in real time, with edits that are barely noticeable, give it something a little extra. It makes the whole proceeding way more impressive than most entries in the horror genre tend to be. The actual plot device which is revealed toward the end as a twist on what we actually expected, is a take it or leave it premise. Some will find it unnecessary and stupid, others will find it gives the film a deeper meaning. I fall somewhere in the middle, as once things begin to be revealed the suspense begins to wan.

“Silent House” is a rather impressive entry in a genre that even Rodney Dangerfield would proclaim gets no respect. I admire when filmmakers in this area decide to do something technically rewarding because it goes to show, even though this is a remake of a little seen film from Uruguay, originality and talent in the film industry isn’t quite dead. GRADE: B+