17 Again: “21 Jump Street” is a Surprisingly Funny and Smart Satire 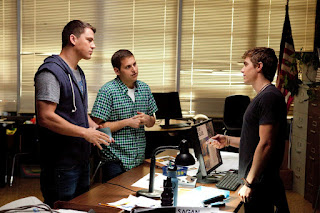 At one point in “21 Jump Street” a character acknowledges that these days there’s no originality and only old things keep being remade. And that is when you realize that “21 Jump Street” is way smarter than you’d ever think it would be. After all, it’s a “reboot” of the cheesy 80s show about young looking (even though they didn’t even look young) cops who go undercover as high school students to sniff out crime. That show starred Johnny Depp, who went on to be pretty famous. And then there was that other guy. Now we have Channing Tatum (can that dude actually be funny??) and Jonah (we already know he’s funny) as cops who go undercover as high school students. Where the 80s show took itself seriously with PSA-like life lessons, this new version is basically a send-up of the original series and its clichés (think The Brady Bunch Movie) while at the same time being a loyal tribute to it.

“21 Jump Street” is sort of a weird mash-up of “The Other Guys” and “Mean Girls.” It not only spoofs the silly conventions of action movies and buddy cop flicks, but also skewers the clichés often found in high school comedies. It’s a John Hughes movie for the tough action guy and it fits in nicely with all those great Judd Apatow modern classics like “Pineapple Express” or “Superbad.” Tatum and Hill play wonderfully off each other as Jenko and Schmidt respectively. They went to high school together, but weren’t friends: Jenko was the popular goof-off and Schmidt was the intelligent nobody. Now several years later they’re forced to be police partners, patrolling parks on their bikes. They’re basically a step above meter maids. A new division of the police department is “being brought back from the 80s” in which younger looking cops infiltrate crime rings at local area high schools. Jenko and Schmidt are prime candidates for this program that is run at 21 Jump St, which is an old, rundown Korean church headed by Captain Dickson (played by Ice Cube) who definitely lives up to his name. And even he admits that’s he’s a racial stereotype.

Jenko and Schmidt’s undercover assignment is to be brothers, attending high school together, and sniff out a drug ring. There’s an unknown supplier of a synthetic drug that the local teens are into, some even posting videos of themselves tripping out on YouTube. The first day doesn’t go too well as both of Jenko and Schmidt’s fake identities get accidentally switched and Jenko is forced to be the intelligent one and enrolled in classes like AP Chemistry, while Schmidt is enrolled in dumbed down courses like Theatre. But a lot has changed since high school – they don’t even know what hipsters are – and it’s here where the movie really shines. Screenwriter Michael Bacall (who also co-wrote the story with Hill) has come up with another witty satire of high school tropes. There’s even nods to the infamous Mary Kay Letourneau, as Ellie Kemper (from “The Office” and “Bridesmaids”) plays a horny teacher who has eyes for Jenko.

Directors Phil Lord and Chris Miller (who also made the animated comedy “Cloudy With a Chance of Meatballs”) have a crafted a rather funny film that is equal parts action and laugh out loud humor. The film finds great humor in simple situations, like when Jenko and Schmidt are forced to take the drug and begin tripping out in the hallway while begin accosted by the douchy gym teacher (Rob Riggle). And there are even fun moments of suspense like when an old family friend of Schmidt almost blows his cover in a shoe store. And it turns out that James Franco’s little brother Dave Franco is definitely on his way to becoming a more well-known young star. He’s charming as the popular guy Eric, who is dealing the drugs at school, but we’re unsure who’s supplying him with them. And what would a funny comedy remake be without a few surpising cameos thrown in for good fun?

“21 Jump Street” is bound to be a surprise for most people who expected a dumb comedy. It’s way smarter than you’d ever give it credit for. It features great, funny performances. Hill and Tatum make a disturbingly good odd couple who play off each other nicely. Tatum has really come out of his wooden-acting shell, although he’s still a little stiff here and there, but he's much improved. He should definitely stick with comedy instead of that silly romance crap. If “21 Jump Street” is an indication of how the rest of this year will play out, then we’re in store from some great surprises. It passes with flying colors. GRADE: A-