The Bad Seed: Tilda Swinton Mesmerizes in “We Need to Talk About Kevin” 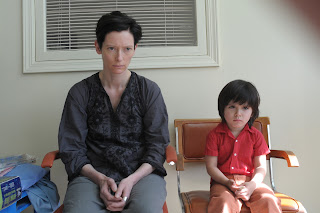 If birth control could exist as a film, it would be “We Need to Talk About Kevin.” The child that Tilda Swinton and John C. Reilly’s characters create in this film is the epitome of evil; even Chucky would be running for the door. This movie isn’t so much about a sociopathic child as much as it’s about a mother, who wasn’t quite ready to be a mother, and how do you deal with a child you didn’t plan for in the first place? Swinton gives one of her best performances here as Eva in director Lynn Ramsay’s haunting drama that is part psychological drama and part art house horror as we witness young Kevin grow up as he portrays sign after sign of having obvious psychological disorders that are never really diagnosed. You don’t have to be a doctor to know that this kid is capable of doing something horrible, and that’s exactly the point, because this is the story of a mother who never really did much to stop her own son from committing a horrible act that’s only implied, and not shown until the films final harrowing moments. “We Need to Talk About Kevin” is a masterful film. It’s so amazingly directed by Lynn Ramdsay (who also co-wrote the film with Rory Kinnear). The story – which is based on the novel of the same name - is told in a fragmented way, which is nothing new, but it really helps you get in the mind of a woman who’s about lost it. At first we have trouble piecing the images we see together, which helps get into this woman’s head. Most audiences wouldn’t want to be inside this character’s head, which is why this isn’t really a film for everyone. It’s not so much a pleasurable experience as much as it is a harrowing experience. Some will want to get up and leave, while others will bravely chug through it wanted to see how all the pieces fit together. I for one sat there enthralled by the entire endeavor as it presented characters and situations not often found in popular entertainment.

Swinton is Eva, a former travel writer who meets her husband Franklin while traveling abroad. A child is the result of their passion and his name is Kevin. Eva’s not the best mother. She can’t quite seem to get him to stop crying and finds calming solace by standing next to some construction workers using jackhammers. As Kevin ages, he has obvious signs of mental disorders. He doesn’t want to smile or laugh or play. She throws a ball, but he refuses to throw it back. Could a child this young really be testing his own mother? A family practitioner insists Kevin is fine, even though we know there’s something up with this kid. A he gets older, he refuses to become potty trained and Eva is forced to change the diaper of a six year old boy, who soils his own clean diaper just moments after being changed. Eva has enough and literally tosses the young boy, breaking his arm. I’m pretty sure Kevin sees this as a win. He does partakes in other odd behavior that would make Dennis the Menace blush. Franklin remains oblivious, he thinks Kevin is normal. Kevin seems to love playing with his father but remains menacingly cold to his mother. But Eva doesn’t much react – she never disciplines the boy. There just seems to be something evil lurking in him, waiting to bubble to the surface.

Another child is brought into the family – a bright eyed blond girl, who appears to be the most normal member of the family. A plot point involving a guinea pig and some drain-o figure in at some point and by then you know that the briefly seen flashbacks of some kind of tragedy at a high school are in no way good omens. The scenes of the present involve only Eva as her husband and daughter aren’t seen, and Kevin (played chillingly as a teenager by Ezra Miller) in police custody. Adults around town seem to know Eva very well. They give her dirty looks – they smash her eggs in the grocery story and they even hit her in broad daylight. Even her co-workers know of her past. To say anything more would ruin the film’s well structured mystery – but it doesn’t take much to figure out that Kevin will unleash all that is raging behind his blank, angry stare. A bought of anger we’re not quite sure came from, which remains the film’s most chilling aspect.

“We Need to Talk About Kevin” isn’t the easiest film to watch and will most likely turn off a lot of people. It’s content was enough of a turn off for Academy members who snubbed Swinton – like Michael Fassbender – for an Oscar nomination. Make no mistakes about it this is a film not for everyone, but for those willing to go travel down a dark place you’ll be rewarded with a moving and disturbing piece of cinema. It’s not all dark and gloomy though – there are brief moments of humor - like when Eva tells the Mormon missionaries at her doorstep that she’s be going to hell. In any case, you’ll surely be talking about “We Need to Talk About Kevin” long after seeing it. GRADE: A-


Feel free to surf to my web site - shopping sexy