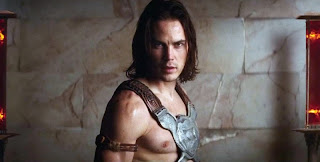 I think there’s a reason why Edgar Rice Burroughs’ story about a man transporting to Mars and aiding in various civil wars with creature aliens and human aliens hasn’t been turned into a film until now is because it just seems silly when you see it all played out. So many other filmmakers have borrowed heavily from the original source material, the “Barsoom” series starting with “The Princess of Mars,” that by now seeing a film adaptation of it seems trite. In a world where six Star Wars films, countless sci-fi and fantasy films, and Westerns exists, it’s hard to find an ounce of originally in the new film “John Carter” which just sort of sits there attempting to pretend you haven’t already seen a movie like this a hundred times before. And to make matters worse the plot is so understandable you even wonder why the filmmakers bothered at all.


Andrew Stanton has made a name for himself in the world of Pixar having directed both “Finding Nemo” and “Wall-E”, both of which are fantastic animated films (and Oscar winners). He makes his live action debut here, but there’s something uncharming and flat about the entire proceedings. His attempts at humor and fun are heartfelt – even providing a cute, alien dog-creature for comic relief purposes – but it’s just an attempt to make a muddled mess of a movie seem less like a muddled mess.

We’re introduced to the title character John Carter (Taylor Kitsch) who hails from Virginia (as we’ll learn over and over again as every alien on Mars ends up referring to John as “Virginia”) and it’s the late 19th century. To sum things up considerably, John is mysteriously transported to Mars, which is known as Barsoom to the locals. There is civil war going on. Obviously, only an Earthling can save the day. And conveniently John is a former Civil War soldier. Upon first landing on Mars, John is dumbfounded to discover his has the ability to jump really high (due to the planet’s gravity and his Earthling bone structure). He comes across green alien creatures with four arms. There are also human aliens around - who live as if it were the Roman Empire - and everyone is fighting with each other. Can’t they all just get along?

I assume that extreme sci-fi geeks will love all of “John Carter” and if that’s the case then the film has succeeded admirably. But I’m afraid the film doesn’t offer much to the non-geek crowd the way other similar films with mass appeal do. “Star Wars” is a sci-fi nerd’s ultimate pleasure, yet it offers action and adventure and drama for the non fan boy crowd as well. The same goes for “Avatar” which is the highest grossing film of all time. Was it because the fan boys all saw it ten times? Yes. But it’s also a movie that EVERYONE saw. The green aliens in “John Carter” are not unlike the blue humanoid Na’vi that are found in James Cameron’s far superior epic. The green Tharks are all achieved with computer graphics and are pretty impressive. But there’s something just not interesting about this species. The Therns are bald pale-faced polymorphers and they’re headed by Mark Strong. More uninterestingly are the Martian humans found on Barsoom with Dominic West as Sab Than. And there’s the beautiful princess played by Lynn Collins. The writers can’t seem to come up with many interesting characterization for these people and instead focus on confusing plot points and hard to remember names. You find out Helium is the name of their city – but for awhile I thought they all just wanted squeaky voices. And that leads me to the film’s main hero - John Carter- and Kitsch fails to ooze much charisma. It’s all about his rugged looks and he chooses to grunt all of his lines. Having a nameless, charmless actor headlining a film with no other stars is a risky move, and unfortunately it never quite pays off.

There are a couple fun action scenes thrown in to keep things moving but by the time anything actual fun happens, you’re so confused as to who is fighting who, it’s really hard to even care. And the film’s mishmash of genres – there are elements of fantasy, sci-fi, Western, even period piece melodrama – never quite congeals into a formidable piece of escapist entertainment. It’s too confusing and convoluted. Even confusing films can be fascinating to watch – I’m thinking Tinker Tailor Soldier Spy specifically – because they offer other elements like great acting or amazing cinematography.

With “John Carter” there will be those that will be pleased, but for me it lacked anything worth getting excited over. It's not a horrible movie, just not particularly that fun or memorable. Michael Giacchino provides another good, but sort of forgettable score, and the technical merits are all there in full force, but I found the whole thing a slog to get through. I think Mars is just a bad luck charm for movies (think “Ghosts of Mars,” “Mars Needs Moms,” “Red Planet,” see where I’m going with this?) Why is it so impossible to make a great movie that to do with that red planet? The film’s poor marketing didn’t quite help - unfortunately the film is almost as dull as its title suggests. GRADE: D+