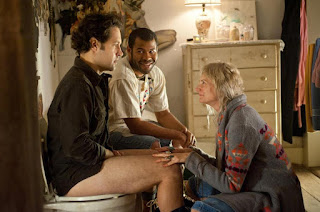 Like many raunchy comedies as of late, you will see lots of nudity in “Wanderlust.” I mean unsexy, non-titillating nudity. It’s “comedy nudity” and those that are naked are not ones you’d expect to see nude (think Kathy Bates in “About Schmidt”) Are you still with me? If you can get past the fact that most vulgar comedies these days rely on this shock value, you’ll be glad to know that “Wanderlust” still relies heavily on really funny dialogue and absurdist moments to invoke laughter. If you’ve seen director David Wain’s wonderful spooftacular “Wet Hot American Summer” then you know exactly what I’m talking about. This time he tells the story of two New Yorkers who have just bought a tiny, but expensive apartment in New York City, but realize they can’t afford it once they become unemployed. They accidentally wander into a hippie commune where the strange folks welcome them with open arms - and some with open robes.

I’m pretty such many conservative Republicans will look at the hippies in “Wanderlust” and assume every liberal is like that. You know the kind who basically eat dirt and tree bark, go to the bathroom in front of each other, and give live childbirth without using painkillers and then proceed to carry around the baby still attached to its umbilical cord. All these silly things happen in “Wanderlust” and odds are no matter your political persuasion, you’ll be laughing up a storm. Paul Rudd and Jennifer Aniston are George and Linda. They just bought an expensive new apartment. George just got fired because his boss is a white collar criminal. Linda just made a depressing documentary about penguins with testicular cancer and can’t seem to find a distributor. They’re forced to leave the big city and travel to George’s brother’s place in Georgia (in one of cinema’s best driving montage sequences ever) where they’ll stay until they can get back on their feet. Needing a place to rest for the night, their GPS takes them to “Elysium” a hippie commune way in the middle of nowhere, where they run into a naked guy who they think is going to made skin suits out of them ala “Silence of the Lambs.”

Elysium is the home to some of the most funny, and memorable characters in a comedy in a long time. There are some familiar faces here. Alan Alda plays Carvin an aging hippie in a motorized scooter who founded the place (along with 9 others who he lists off by name over and over again), Justin Theroux is the bearded Seth who is so cut off from society that he thinks laserdiscs and floppy disks are still popular forms of technology, Malin Akerman is Eva who believes in “free love,” funny lady Katherine Hahn is the resident activist who gets upset when Gorge swats a fly, Six Feet Under’s Lauren Ambrose makes a welcomed appearance as the knocked up Almond who obviously is a fan of free love as well. Wet Hot American Summer alumni Joe Lo Truglio is the resident nudist. What a bunch of weirdoes! George and Linda decide to try out this new lifestyle for a couple weeks – before you know it, Linda is squatting in the grass to urinate, much to George’s dismay. Of course these folks aren’t much stranger than George’s conservative bother and sister-in-law who have hilarious strange quirks of their own. (They’re played by Ken Marino and former SNL cast member Michaela Watkins).

I can’t really say enough positive things about “Wanderlust.” I seriously was laughing so hard I can forgive it for having a not very original plot structure. Will George and Linda temporarily break up before finally being reunited? Yes, snooze. They even manage to squeeze in a subplot about developer who wants to use the land to build a casino. But that stuff isn’t what’s so special here. What’s so great is the quirky and sometimes just simply bizarre humor to be found. Each actor gives it his or her all. And Wain is in top directorial form – each film he makes is more polished than the last – yet he never loses that absurdist feel that pervades each and every one of his films. Sure some classic “American Summer” cast mates are nowhere to be found (like Elizabeth Banks, Janeane Garofalo, Molly Shannon or Amy Poehler) but this new cast is such a wonderful ensemble – it almost makes you want to live in the woods with these lovable weirdoes. GRADE: A-