Annie Fall: Romantic Comedies Get the “Airplane!” Treatment in “They Came Together” 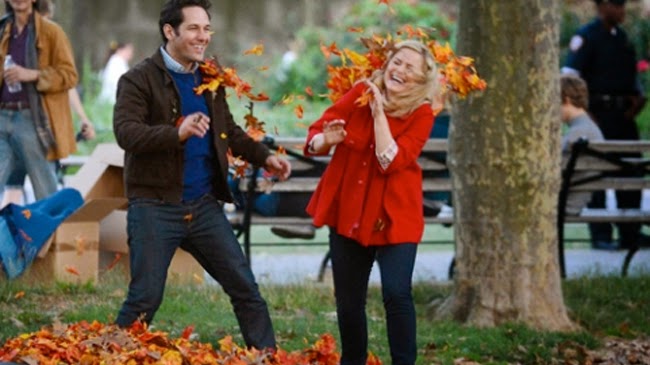 I’m not going to bitch and moan about the current state of the spoof movie. I won’t bring up movies like “Meet the Spartans,” “Epic Movie,” and “Vampires Suck.” Too late. The modern spoof film wasn’t always in a state of utter shamefulness. Back in 2000 it was healthily revived with the Wayans’ spectacular slasher spoof “Scary Movie.” And with some exceptions (mostly “Scary Movie 3,” “Not Another Teen Movie” and “Walk Hard”) it was all downhill from there. Luckily around the same time we were given David Wain’s “Wet Hot American Summer” and a new team of ragtag comedy geniuses was born. The absurdist style was a perfect blend of parody and nonsense, in other words, any Airplane! fan’s dream come true. Flash-forward thirteen years and now we have David Wain, with co-writer Michael Showalter’s romantic comedy spoof “They Came Together.” And it’s pretty glorious.

“They Came Together” stars Amy Poehler and Paul Rudd who finally get to play opposite one another. He’s Joel who works for a corporate candy company and she’s Molly the quirky girl who always falls down who owns a cute indie candy shop (a shop where, hilariously, everything is free and all proceeds go to charity). They meet, hate each other, naturally fall in love, break up, and then get back together. You can recite the plot even if you haven’t seen the movie because you’ve seen or know at least know about the plots of the films it’s making fun of. But this isn’t one of those “Disaster Movie” type spoofs where the jokes are only recycled scenes from current films. The movie has its own story, rhythm, characters, and jokes. It spoofs and deconstructs ideas and concepts and clichés, it doesn’t just repeat them (though it does). When Molly decides to change something about herself to see if Joel notices, she puts on a pair of Groucho Marx glasses complete with big nose and mustache. She’s touched that he notices.

“They Came Together” not only has a delightful double entendre title, but it has a knowing wit about itself and that comes from its writers. Wain and Showalter, who have finally come back together for the first time since “Wet Hot American Summer,” (including a few returning cast members) obviously know movies very well.  There are hints and nods to other films such as the famous “I’ll have what she’s having” line from "When Harry Met Sally." And in true “Wet Hot” fashion there are some simply bizarre and absurd moments. Check out those two guys who stare at Joel and Molly during their dating montage. Or how about the body that happens to be buried underneath the pile of leaves Molly and Joel are playing in?

I was pretty certain the spoof genre was dead in the water. Actually it very much is. Though there have been a few bright spots lately like the parody-rich “21 & 22 Jump Street” and even “The LEGO Movie.” But I’m always looking for a good “Airplane!” style spoof or some “Wet Hot American Summer” style nonsense and “They Came Together” certainly fits the bill. After all is said and done does it really need to exist? Not really but at least it’s pretty darn funny.  GRADE: B+
Posted by Chris at 11:00 AM