Training Day: The Dragons Return in the Majestic “How to Train Your Dragon 2” 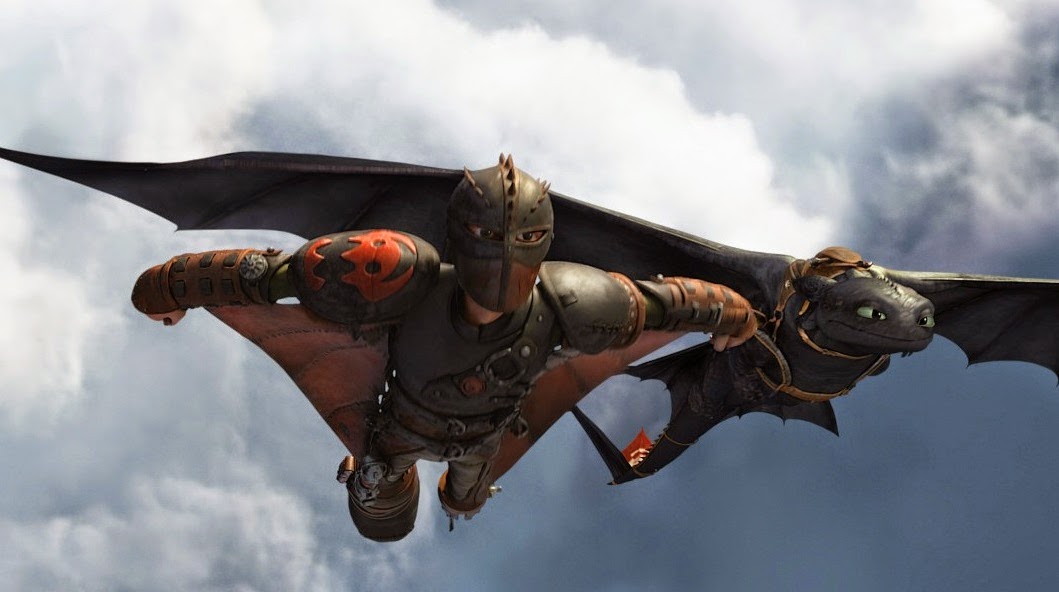 “How to Train Your Dragon” really surprised me when it was released four years ago. It featured such a delightful and sweet story about a young Viking boy as he befriends and attempts to tame a dragon. It was a huge hit so obviously we get the unneeded but equally surprising sequel. To be sure, this isn’t really a film that needed to be made, but it really explores more of the world and characters that we got to know in the first film and after a slightly meandering first act finally settles into a thrilling story about family and even some ecological issues as well.

Young Viking chief-to-be Hiccup (Jay Baruchel) has aged into a young man (an interesting development seeing as though many cartoon characters rarely age) and he’s still partnered with his dragon pal Toothless. Is Toothless just the cutest darned animated character ever? It’s possible. The film opens with a high flying dragon riding competition, but like Ariel in “The Little Mermaid,” Hiccup is out with his dragon friend exploring. He eventually comes across a strange ice world where wild dragons are abundant and looked after by a mysterious human figure, who just so happens to be someone from Hiccup’s past.

Obviously things aren’t perfect otherwise there’d be no tension or plot to speak of. The evil conqueror named Drago (Djimon Hounsou) hates dragons and wants to hunt them unlike the villagers of Berk who have come to peace with the creatures (and use them in everyday life) since the last film. There’s also Eret (Game of Thrones’ Kit Harrington), a dragon trapper who works for Drago, who will question his loyalty as the film progresses. Eventually we learn that a huge Alpha dragon can actually control all the other dragons which adds some real emotional tension to the proceedings. Hiccup must defy his father Stoick (Gerard Butler) yet again as he makes it his mission to help the dragons and Berk’s way of life.

I don’t really have much to complain about with “How to Train Your Dragon 2.” Although like a dragon missing an essential wing on its tail, the first act of the film felt like it was kind of meandering until it found its footing. After all, if all the dragons were successfully trained, isn’t that title sort of misleading? But I digress. The animation here is simply amazing; it’s probably the best work Dreamworks has ever done. And about 60 percent of why these movies are so great is because of the absolutely phenomenal music score by composer John Powell. This, like the first film, definitely has Oscar-worthy compositions. And the music supports the real heart of the film: the relationship between Hiccup and Toothless. They're simply a winning pair and I could easily watch five more films if it were just these two, as unnecessary as that would be.

It’s pretty simple. "How to Train Your Dragon" was a great movie, with all its delightful E.T.-like qualities and "How to Train Your Dragon 2" is just as good. It has tremendously gorgeous animation, music, and an inspired voice cast. The movie is emotionally resonant, has some pretty amazing flying and action sequences, though director Dean DeBois’ script takes a while to really get moving but once it does it doesn’t let go. It pretty much opens up the world that was so well established in the first film. There’s not much to complain about here, you should be dragon the kiddies to see it.  GRADE: B+

Trailer for How to Train Your Dragon 2 on TrailerAddict.
Posted by Chris at 10:17 PM

You’ll desire for this as well as look hublot replica uk from this before you lastly have this. However should you had been darned to some existence associated with horological tag heuer replica sale as well as had been allowed to possess only one, then your Rolex Oyster Never ending 39 will be a excellent option – cartier replica sale, obviously, which you’re prepared to perform with no day show or perhaps a clear back again. If that’s the case, after that this particular model’s rolex replica sale design, large-enough-but-not- too-large measurements, as well as robustly well- designed self-winding motion may keep your arm is actually rolex replica sale outfitted with regard to regardless of the day time – or even the night time – offers upward it’s sleeve. Previously half-century, because it tag heuer replica sale it’s GMT-Master, Rolex has taken away simply 2 brand new problems: the actual Rolex Yacht-Master II, within 2007, having a countdown rolex replica boat timer, and also the Rolex Sky-Dweller, designed with each another period area as well as a good yearly diary, within 2012. With this function all of us clarify the way the Sky-Dweller, and it is revolutionary motion, functions.