The Wrestler: “Foxcatcher” is a Disturbing Film with Stunning Performances 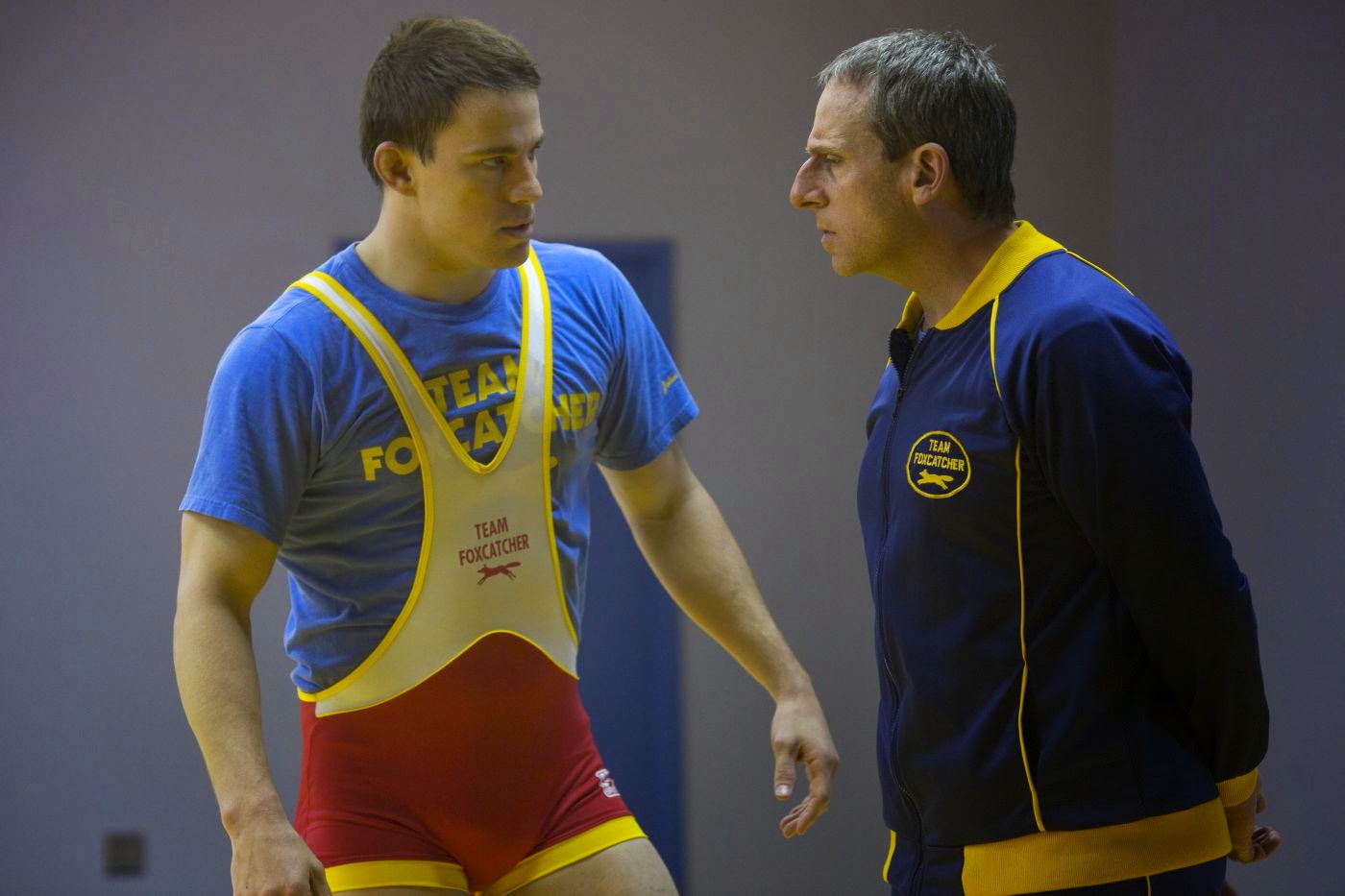 Director Bennett Miller is a genius at getting amazing performances out of his actors. Don’t believe it? His first two feature films had four acting Oscar nominations between them (and one win for the late Phillip Seymour Hoffman in “Capote”), and his latest drama “Foxcatcher” is almost guaranteed at least two more.  More disturbing than the film itself is that the best performance in the film is from the actor you’d least suspect: Channing Tatum.  As real-life Olympic wrestler Mark Schultz, Tatum gives a career defining performance as a lonely man determined to win. Steve Carrell, known for years as goofy workplace boss Michael Scott on the sitcom “The Office,” gives an equally impressive performance as an equally lonely guy with a severe personality issue. He plays the real life eccentric millionaire John E.  du Pont who coached wrestlers on his wealthy Pennsylvania family’s estate and ultimately used his fortune to make friends.  His relationship (which eventually sours) with the young Olympic gold medalist is the core of the film and offers one of the most creepy and disturbing real life stories put on film this year.

“Foxcatcher” is not going to be a film that is easily loved by everyone. It has a pervasively disturbing atmosphere. It sort of leaves you feeling icky. And that’s a credit to the wonderful performers and Miller who has crafted a purposely slow-moving and eerie film. Granted this isn’t a horror film by any means but something horrific does eventually happen (a real life incident which I won’t spoil here). This is Miller’s third feature film and it feels like a weird hybrid of this first two movies: “Capote” which also features a uncannily good lead performance, and “Moneyball” a fascinating true-life sports drama.

This film depicts the real life story of Mark Schultz who is recruited by du Pont. Du Pont is determined to train and coach a winning wrestling team to compete in the 1988 summer Olympics.  He invites Mark and other wrestlers to live and train on his fancy rural estate. Du Pont is a strange, peculiar man as depicted by a nearly unrecognizable Carrell. The makeup is as impressive as Carrell’s chilling performance. Du Pont is a creepy fellow and he’s shown as a man of solitude who you quickly realize is an extremely lonely and disturbed man. Schultz and Du Pont hit it off and form a sort of father-son relationship. That chemistry is soon disturbed by the arrival of Mark’s older wrestler brother David (Mark Ruffalo). Mark and David have their own issues but the well-meaning David soon drives an unintentional wedge between du Pont and Mark which eventually has devastating consequences.

Miller is a fascinating director because he really lets the actors do most of the work. He coaxes terrific performances from them and doesn’t let things like fancy camerawork get in the way (though as disturbing as the film is the photography is almost beautiful). He builds tension almost unbearably slow. The script from E. Max Frye and Dan Futterman is equally fascinating and mellow. You really get a sense of who these people are. Mark and Du Pont are lonely individuals who only want to succeed. The problem is that ultimately they’re standing in each other’s way. Carrell in particular is amazing at not only getting the physical mannerisms of Du Pont but in showcasing the almost cold rhythms of his character’s inner turmoil. He’s criticized by his cold, elderly mother (Vanessa Redgrave) and which almost gives him a weird Norman Bates quality (not to mention his weird obsession with birds and his almost homoerotic fascination with wrestling).

Everyone is great in “Foxcatcher” but Tatum almost steals the show from Carrell and his creepy, pointy noise. His depiction of a lonely athlete determined to succeed is nothing short of brilliant. The entire ensemble works amazingly well together and the overall icky feeling the film projects is spot on by Miller who gives us only his third film. It’s an amazing achievement for a filmmaker to present a real life story that is filled with heart-stopping tension (the wrestling scenes are shot and edited particularly well) and yet is one of the slowest and meditative films of the year all the while already knowing what ultimately happens. That’s the power of great filmmaking.  GRADE: A-

Trailer for Foxcatcher on TrailerAddict.

his article is very helpful at all thanks

Thank you for joining us. his article is very helpful