The Artist: “Big Eyes” is a Delightful Change of Pace for Tim Burton 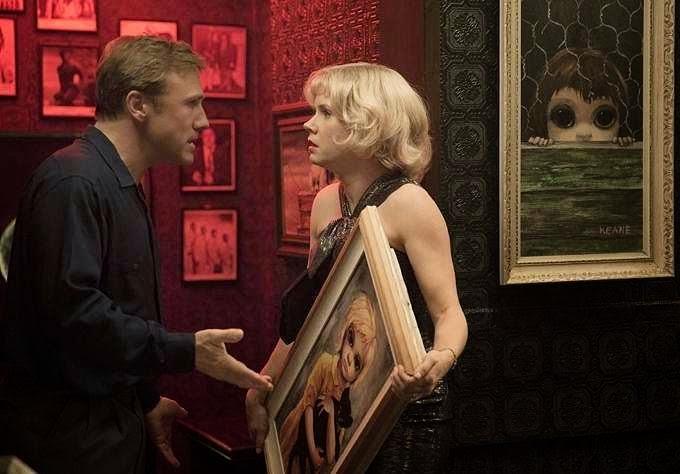 “Big Eyes” is the Tim Burton film you never thought Tim Burton would ever make. It makes sense that he would make it, but it is definitely the most un-Tim Burton film he has ever made. First of all, it doesn’t feature Johnny Depp or Helena Bonham Carter and it has no fantastical elements whatsoever (except for a brief surrealist sequence). Heck, even Danny Elfman’s score doesn’t sound like a Danny Elfman score. On paper this sounds just awful for the Tim Burton fan, but as someone who loves all of his films (yes even his “Planet of the Apes” has some merit) I found “Big Eyes” to be a refreshing change of pace and shows an artist at work prepared to change things up a bit. It makes sense then that this film is actually about an artist.

When you really take a good look at “Big Eyes” even if it feels unlike most Tim Burton’s other films, it has elements we’ve definitely seen before. Even if the film takes a more realistic approach it has a whimsy to it that only Mr. Burton can give a film. The pastels take over here and the film’s setting feels like an expanded version of the pastel 50s suburbia he presented in “Edward Scissorhands.” Burton also downplays any sort of obvious visual effects. This is not “Alice in Wonderland,” though at times the cinematography by Bruno Delbonnel gives the film an almost soft, dreamlike quality. For as many elements that feel like things that you’d see in a Tim Burton film, there are other elements that just aren’t there. Did I mention that this is a movie about an artist taking credit for another artist’s work? Coincidence?

“Big Eyes” tells the true story of artist Margaret Keane (Amy Adams). She famously painted pictures of children with large eyes. After leaving her husband with her young daughter in two she attempted to make a life for herself in California while selling her sort-of-creepy-in-a-Tim-Burton-way portraits. There she meets the charming Walter (Christoph Waltz), a struggling artist himself, whom she later marries. The couple is an indelible pair. Margaret  is the obviously more talented painter but Walter makes a great businessman, schmoozing with art gallery owners and restaurant owners to let his wife’s works be displayed for sale. Later, a quick misunderstand leads to Walter taking credit for Margaret’s work which snowballs until they are both committing full on fraud. Walter insists it’s best for business: people would rather buy art from a male artist obviously and he knows how to basically charm people into buying the art (even though people who buy it obviously really like it). But is that really fair? Not at all.

The film’s screenplay was written by Scott Alexander and Larry Karaszewski, who specialize in telling the true life story of strange people. They previously wrote “The People vs. Larry Flynt,” “Man on the Moon,” and Burton’s “Ed Wood.” Here they give Margaret the spotlight that she deserves and Amy Adams plays her with all the spunk, appeal, and emotion that you’d expect from the always terrific actress. And Waltz matchers her in every way. He’s a appealing guy; you get why Margaret would be intrigued by him and it makes sense that he’s able to make the big eye paintings the success they were. However, once you get to know more about Walter and his ultimate drive towards “success” you see the monster that was hiding in plain sight. It all wraps up in a quirky courtroom scene that feels almost out of place (the film has a weird mix of almost silly comedy and very serious drama) but Burton directs it with the verve that he’s been so absent in his last few films.

“Big Eyes” is the shot in the arm Tim Burton really needed. With a fresh cast and a fresh palette he has created something that is very different from what he’s done before and yet it has Burton marked all over it. You won’t find any weird creatures or freakish outcasts but his quirky personality really shines through (and you really get the sense that Burton has been heavily inspired by Margaret’s work). Even if it’s the most un-Tim Burton film he’s ever made it feels like the one many have been waiting for.  GRADE: B+

Trailer for Big Eyes on TrailerAddict.