Drum & Drummer: The Thrilling “Whiplash” is a Riveting Crowd Pleaser 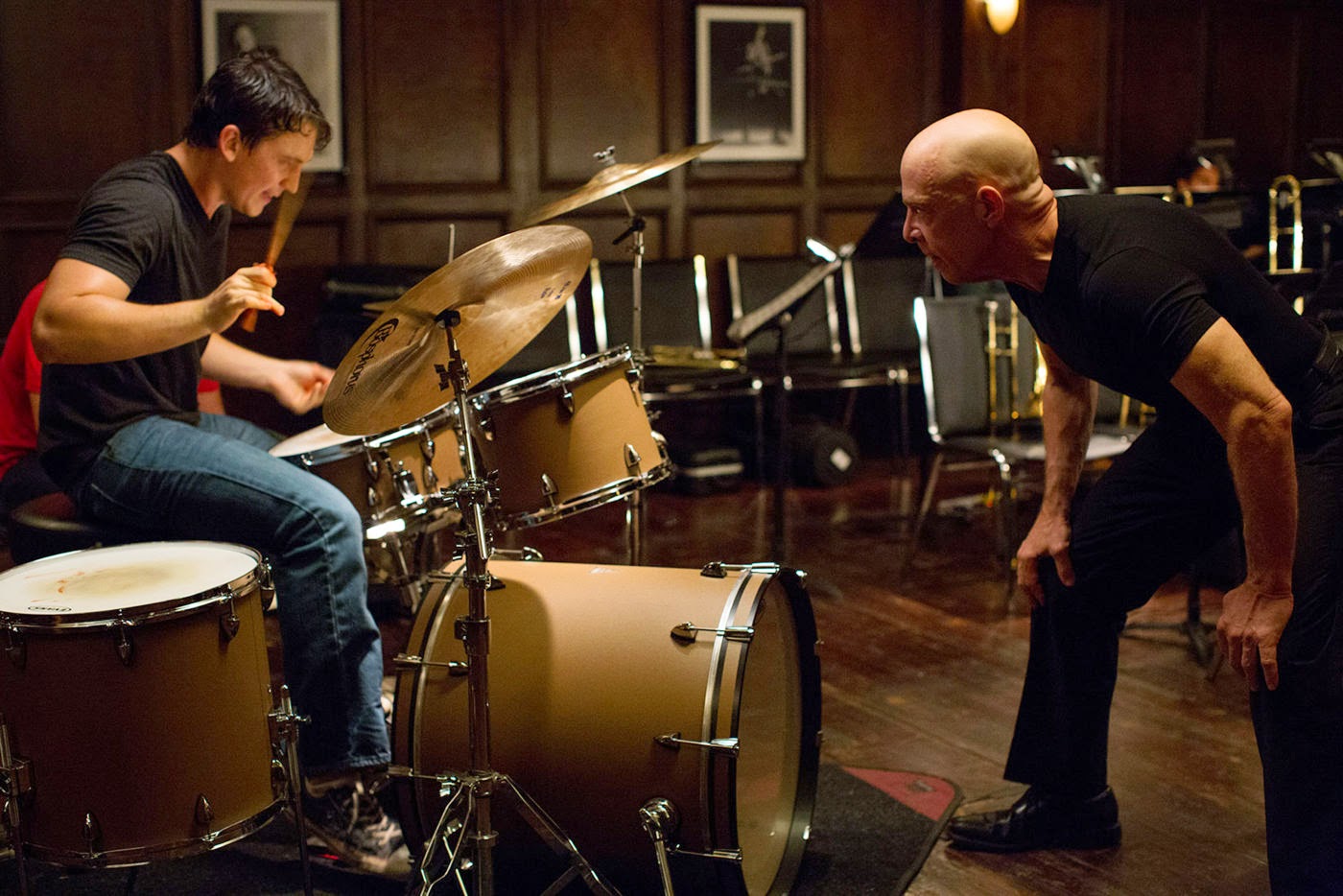 If you were to tell me that you could turn the story of a student studying to be a jazz drummer into a exhilarating thriller of a film I’d say you’d be full of it. And then there’s “Whiplash.” A “music drama” that is every bit as exciting, dramatic, suspenseful, moving, and feels nothing you’d ever seen before. It’s almost Hitchcockian in its approach to enthrall you with this fascinating cat and mouse game between a borderline sadistic college music professor and an in-it-to-win-it student.

“Whiplash” is a movie about a young man who wants to be a great musician that shockingly isn’t even based on a true story. It stars the always charming Miles Teller (who constantly seems to play a similar, likeable character but brings something extra to this role) as Andrew Niemann who is a first year student at a prestigious music conservatory ready to fulfill his dream of being a great jazz drummer. He gets an opportunity to be an alternate drummer in the school’s jazz band headed by feared instructor Terrence Fletcher (a perfectly cast J.K. Simmons). Fletcher has interesting teaching methods to say the least. He’s a mean guy who’s all about no BS. We’re talking swearing, insulting, and borderline assaulting his students. Of course to say anything more about the relationship between Fletcher and Andrew would be spoil the suspenseful fun of the film.

The film is outstanding in a number of nearly perfect technical ways. The film has terrific direction from the relatively unknown Damien Chazelle who wrings out terrific, and captivate performances from its stars. As a director he makes every right decision at every possible moment. The camera placement, the colors, the editing: all top-notch. He wrings suspense out of scenes you’d never expect to be suspenseful. The tension that is created by the actors is palpable. We’re talking sweaty palms here. Simmons commands the screen and instantly goes down in cinematic history as portraying one film’s greatest onscreen villains. Of course, there’s a lot more to him than initially meets the eye. This is far from a one note performance. Teller is really a breakthrough as well, when Andrew’s hands bleed, you feel it too.

“Whiplash” is something truly to behold and a film that transcends the genre. When the film ends (and we’re talking a taut and perfectly paced 106 minutes, none of which are wasted) you want to applaud at the end. And it has enough suspense to fill three Marvel films. Everything about it is superb from the terrific jazz music and pitch perfect performances and deserves every single one of its Oscar nominations. It’s a thrilling delight whether you know anything about music or not; in other words, it’s a must-see.  GRADE: A

Trailer for Whiplash on TrailerAddict.

Thank you very helpful article. allow me to join to share health articles with your article hopefully useful.


This article is interesting and useful. And let me share an article about health which insha Allah will be very useful if we use it again for others.