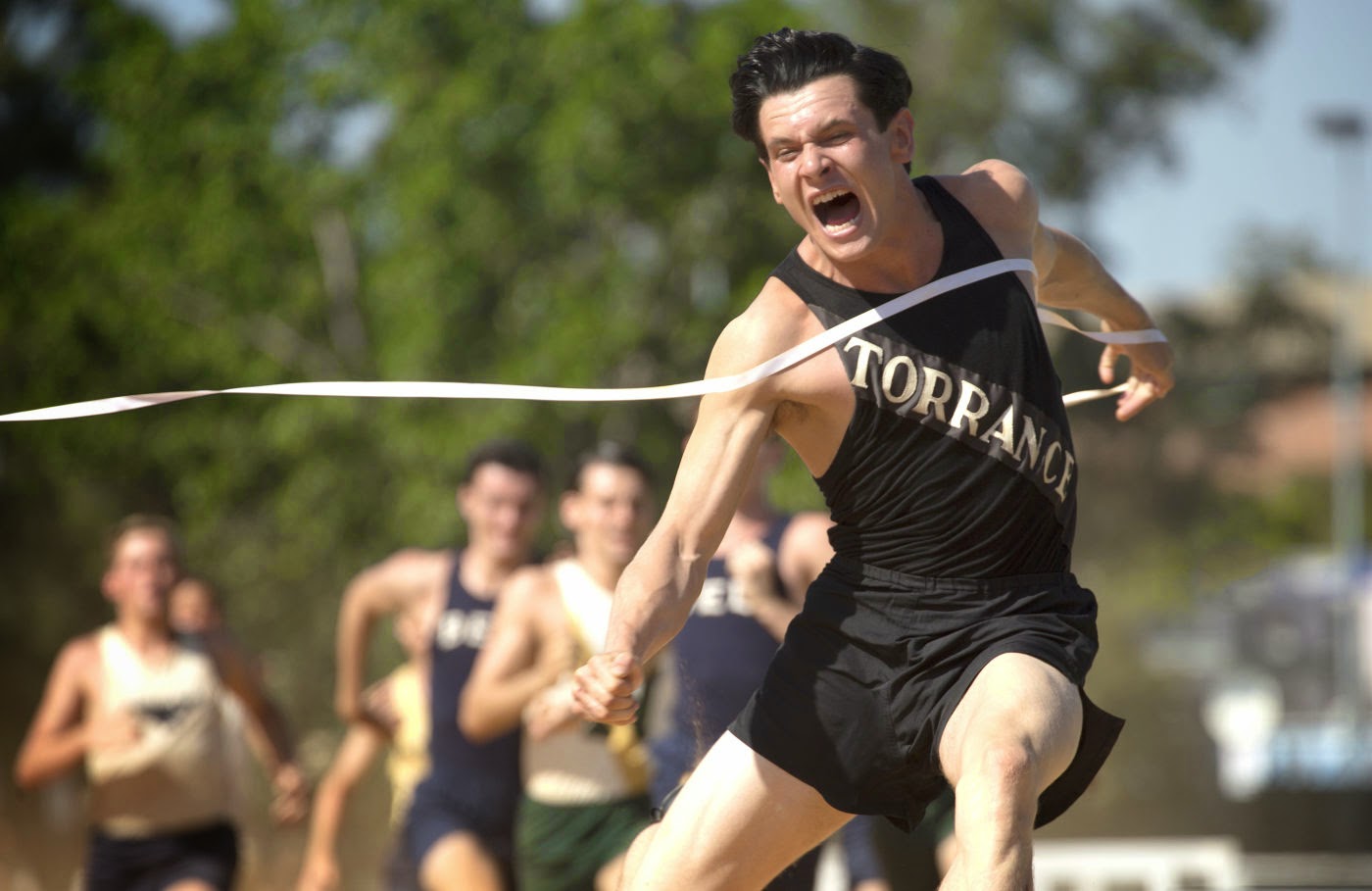 It feels so rare today to see a female in the director’s chair ordering a bunch of guys around in a war film. Though it does happen: just as Oscar-winner Kathryn Bigelow who directed the male-centric Best Picture winning “The Hurt Locker.” This time Angelina Jolie steps behind the camera to bring us the real life story of former Olympian and POW war hero Louie Zamperini in one of the most emotionally charged and flat out amazing films of the year. Jolie directs with an emotional hand but it never feels manipulative. She also wisely never really makes an obvious political statement and would rather this just be a story from Zamperini’s point-of-view. It’s a dynamic piece of filmmaking and even if it hits all of the standard emotional beats. I found it to be simply enthralling – it grabbed me and never let go.

Jolie doesn’t show every single aspect of Zamperini’s life. We do get a flash back to his childhood and upbringing in Torrance, California. As a child the kid was picked on for being Italian and found himself always in trouble. His brother eventually discovered that Louie could run and began to train him in long distance running. Louie, played perfectly by Jack O’Connell, became known as the “Torrance Tornado” where he broken numerous records and his eventual participation in the 1936 Olympic Games in Germany before eventually enlisting in the Army.

Jolie opens with a thrilling midair sequence and then uses a flashback device to fill us in briefly on Louie's background and former glory days as an athlete but that is sensibly abandoned once we get into what really made Zamperini’s story so special.  During one rescue mission as a bombardier in the Air Force, his plane crashed in the ocean due to mechanical failure which killed all aboard but him and two other soldiers. The plane’s captain Russell “Phil” Phillips (Domhnall Gleeson) and Francis “Mac” McNamara (American Horror Story: Freak Show’s Finn Wittrock) also survived with Zamperini whose survival aboard life rafts is rivetingly depicted. Once we get to the life raft section there are no more flashbacks; there is no relief from this terrible situation and we’re with these characters every step of the way. Starvation and thirst is portrayed realistically (the actors lost weight for their roles); and we see the men use clever techniques to survive including catching a bird which they use as fish bait. It’s hard to watch yet constantly fascinating.

As if spending more than a month starving nearly to death on the open ocean, weathering storms and curious sharks, Zamperini is captured by Japanese soldiers and sent to a hellish detention camp (is there any other kind?). The camp is run by Mutsuhiro “The Bird” Watanabe (Japanese rock star Miyavi) who proceeds to take particular pleasure in abusing Louie because he’s an Olympic athlete. The relationship between The Bird and Louie is a real mesmerizing aspect of this section of the film as it appears to be the Bird’s ultimate goal to make Louie completely break down but having a fighting spirit he refuses. These scenes of abuse and torture are difficult to watch, and certainly defies its PG-13 rating, but I like that the film refuses to sugarcoat any of what really happened to this guy.

Some may even find it fun to know that the Coen brothers actually worked on the script though they did a rewrite of Richard LaGravenese and William Nicholson’s original screenplay. There’s nothing truly “Coen brothers” about it though it takes the most fascination parts of Zamperini’s life and puts it on screen in a classic structure. And the film’s performances are nothing short of amazing. The camaraderie of the soldiers really works and O’Connell is so darned likable in his breakout role; you’re constantly rooting for him horrific ordeal after horrific ordeal. Miyavi is also a standout as the torturous “Bird.”

I loved everything about “Unbroken.” Even if it’s one of the more difficult films to really sit through I found it simply fascinating from beginning to end. And the film reminds much more of other survival tales like “127 Hours” or “Into the Wild” than it does like other war films like “Saving Private Ryan.” What a relief that all the so-called “Oscar bait” movies this year have actually been good. Angelina Jolie has crafted a simply sensational film that has stuck with me since I saw it. Some will see the film as a rewarding, moving journey and others will simply take it as a harrowing endurance test. Though, if you could make it through last year’s torture-porn-as-historical-drama “12 Years a Slave” you can easily make it through “Unbroken.” It’s a movie that hits all the expected beats but damned if I wasn’t extremely moved by it all.  GRADE: A

Trailer for Unbroken on TrailerAddict.
Posted by Chris at 8:05 PM