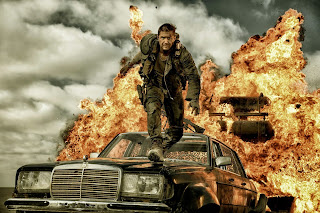 I’ve always had a theory that sequels to well-loved movie franchises that get made many years later are rarely, if ever, successful. “Mad Max: Fury Road” has proven me wrong. Not only is it an amazing sequel but it completely bests each and every film that came before it. The “Mad Max” post-apocalyptic Australian film series from director George Miller is an cult trilogy that has aged poorly though all the films have one positive thing in common: simply outstanding stunt work and car chases. Could you imagine if The Road Warrior has been made today? Well now we can with the release of “Fury Road” – and strap in because it is one ludicrous and thrilling ride filled with jaw-dropping camerawork, effects, and production value that completely blows the original films out of the water.

This fourth entry has very little setup and that’s fine: all you need to know is that it takes place in a post-apocalyptic world where water and gasoline are hot and rare commodities. Max (Tom Hardy, taking over Mel Gibson’s role) is still mad as ever and has a touch of the crazies as anyone would living in this stylishly produced desert wasteland. In the film’s opening moments his kidnapped by a bunch of equally crazy guys known as the War Boys who work for their leader Immortan Joe (Hugh Keays-Byrne) a wild-eyed masked villain with a Darth Vadar-like voice. He attempts to escape as trucker Imperator Furiosa (Charlize Theron) goes on a mission with her tanker to retrieve gasoline… though she has ulterior motives which sets off the film’s entire plot into motion: a kick-ass car chase that hardly lets up for a minute. Max and Furiosa, each apprehensive, eventually team up forming one of cinema’s greatest action duos of recent memory. And throw in Nicholas Hoult as a morally questioning War Boy Nux for good measure.

Yeah that’s basically it. You get almost two hours of crazy vehicles chasing each other through the desert and it’s all utterly amazing. The 70 year-old Miller (who’s last three films were Babe: Big in the City, Happy Feet, and Happy Feet Two) sits confidently behind the camera giving us dizzying shot after dizzying shot of explosions and automotive mayhem that Michael Bay couldn’t on dream of conceiving.  Cinematographer John Seale (also in his 70s) was coaxed out of retirement. The guy is no stranger to shooting in deserts, having won an Oscar for lensing “The English Patient” but his work his groundbreaking. Miller employs mostly practical effects with real stunt people performing at high speeds. We’re talking crazy stuff here like crazy guys wielding chainsaws and flaming throwing guitars. It’s also so… Australian. It’s like Baz Luhrmann wanted to make an action thriller or something.

With all the frenetic action and amazing stunt set pieces, there’s actually a lot going on emotionally as well. The film has a strong feminist element which never felt forced and gives the story, which essentially a long chase, real gravitas. The performances are also wonderful, especially Theron who has found her Ripley role as Furiosa. Hardy makes a great action hero grunting along the way though his bad boy looks feel strange opposite all of the bizarre make-up and costume design. This is such a fascinating world Miller and team has created and everything here is simply top notch and beautifully conceived and produced. And it’s all given a heartbeat with a simply amazing, pulse-pounding score from electronic musician Tom Holkenborg (who goes by the stage name Junkie XL).

“Mad Max: Fury Road” is a complete assault on the senses in the best way possible. It’s a dazzling piece of big-budget action filmmaking. It feels like something so different from what came before it and yet it feels like a nature step in the Mad Max cannon. It may just have a simple point A to point B plot, but there just isn’t anything else out there like it. See it and you’ll never drive the same way again!  GRADE: A

We offer different desert quad bike tours that’ll have you and your buddies scaling the Arabian sand dunes and taking in some truly breathtaking scenery desert bike.
Desert Safari Dubai, a 6 Hours Tour in the Desert of Dubai that is dipped in the rich sauce of thrill and excitement. The trip includes the activities like Belly Dancing, Dune Bashing, Tanura Dance, Sand Boarding Desert Safari Dubai,

Hatta is an ancient town located from a one hour drive from Dubai City. Having said that, the town is full of breathtaking views, mountains, parks, etc Desert Safari Dubai.

gogoanime is a wonderful absolutely free anime website. It is the site where anime lover can see the anime which he want. Millions of user Enjoy free streaming.

animeheaven provides the latest HD episodes for all the most popular gogo anime releases worldwide. Best gogoanime HD for free in 2021.animeheaven ...

An audacious Desert safari Dubai expedition is incomplete while not sand dune bashing as this can be the foremost attraction of urban center culture for many years and centuries. sand dune bashing was ab initio a diversion for the native Emirati folks that later evolved as a brilliant recreation tour program for folks coming back everywhere the globe.

Dunes area unit hillocks of loose sand particles that occur in numerous shapes and sizes shaped thanks to the swift movement of the wind. Dunes area unit largely found in beaches and deserts. sand dune bashing may be a main desert sports activity as an enormous 4X4 sports utility vehicle (SUV) just like the Toyota Land Cruiser or Fortuner is employed for riding of Desert safari

Dubai is a famous place, known for its culture, eminent deserts, and numerous other specialties exclusive to it. Dubai forms a ideal spot for the adventure hunters desert safari price.

My husband and i arrived here since this post had been tweeted by a individual I was following and am extremely pleased I made it here. noticiasdealcorcon

Enjoy The best Dubai Desert safari and Dubai city tour with Adventure Planet Tourism at Reasonable Price.
Dubai is one of the Best Place to visit you will definitely enjoy and explore new Places.

Safari Dubai offers to create unforgettable memories. In order to make your evening even more enjoyable, right here, you can enjoy belly dancing, Tanura and Yalla Dance. Plus, you can even take advantage of the best fire show, along with a bite-sized snack.

In Abu Dhabi Tour deals you can enjoy the country and its cultural heritage, a city that is set out for the great craftsmanship. You can explore the history of Abu Dhabi during an 8-hour round trip to the largest city in the United Arab Emirates, from the center at this time. Ferrari World, Emirates Palace, Heritage Village, Abu Dhabi is a Museum, etc.). Also, in the.

Desert Safari Dubai rates is the perfect place to get into the true adventure of your presence, not just the goods. All settings of sunlight make the desert beautiful. Discover the beauty and culture of the Beautiful Desert, the quiet, and the exciting Dubai desert safari rates. Desert Adventure Group offer travel-lovers, with a lot of experience on the adventure of a lifetime, along with the Dubai Desert Safari rates

I have recently started a blog, the information you provide on this website has helped me tremendously. Thanks for all of your time & work.   hadeel web

Whatever host presently by using? Am i going to ดูการ์ตูน obtain a internet affiliate url to a coordinate?

The way you write, you are a really professional blogger.premium desert safari dubai

This is a great feature, so much so that you give it and give it away for nothing. Our article has generated a lot of positive interest.premium desert safari dubai