Ghostblunder: The Disappointing “Poltergeist” Redo is Rather Unremarkable 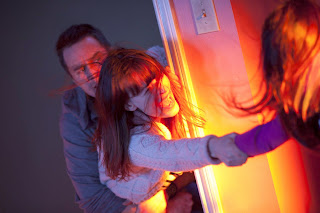 In the original 1982 film “Poltergeist” real skeletons were allegedly used in the pool sequence. Real as in actual human remains. They were apparently cheaper than the plastic ones. In the remake of “Poltergeist” they don't even use prop skeletons; they're made in the computer and are not very convincing. Of course, the original series of films was apparently “cursed” after several cast members passed away after shooting the movies. The new cast could only be so lucky.

There's actually nothing truly wrong or extremely bad about the new “Poltergeist.” It's just that in a world where movies like “Insidious” and “Paranormal Activity” and “The Conjuring” (which may be one of the best haunted house movies since "Poltergeist") exist it feels a bit redundant to redo a movie that inspired all of the above. The film pays tribute to the original film by reenacting memorable moments: the tree, the clown, the bent silverware, etc. The film hardly does anything new, transcendent, or creative with the material; material that was pretty much perfect from the get-go.

When remakes of well-liked movies happen it's usually because it would be interesting to see that story with modern effects – for example, “King Kong” a rare remake done right. The redo even won an Oscar for those impressive new effects. The original “Poltergeist” was nominated for three Oscars including for it's visual effects. Are 2015 computer effects more impressive than what could be accomplished in the 80s? Generally, yes. But you know what's really missing? Creativity. Nowadays a computer can show an audience anything. In 1982 it was way more impressive (and in terms of horror, shocking), which is why nothing that director Gil Kenan (a damning directing gig if there ever was one) throws in front of us is even remotely scary, cool-looking, or generally impressive even by modern standards.

The new cast includes Sam Rockwell and Rosemarie DeWitt as the heads of the Bowen family. They move into a new house and quickly notice some strange phenomenon. Can we retire the cliché of a family moving into a new house only to discover it's actually haunted? That would be great. Like in the original film they have three kids: a teenage daughter, a young song, and the youngest daughter. Of all the actors, I was most impressed with Kyle Catlett as the middle child Griffin who gets an entire story arc all to his self, even if it's contradicting (the film opens up with him playing a violent zombie video game and then presents him as being afraid of everything). The youngest daughter, named Maddy here instead of the reusing the iconic name Carol Anne, is again the one who the ghosts make contact with and then kidnap. And instead of diminutive psychic Tangina we get Jared Hess doing his own reality TV host version which feels uninspired and uninteresting. Jane Adams is good as a fellow paranormal researcher who helps investigate. The new script by “Rabbit Hole” writer David Lindsay-Abaire even controversially shows us the ghostly other world: and it's more yawn inducing than sacrilegious. Hands down the best new sequence in the film involves a power drill.


The original “Poltergeist” may not be the best movie of all time, far from it, but it's a classic of the horror genre and was a terrific summer movie blockbuster. It was an event - until E.T. came along a week later at least. Nothing about this new film feels even remotely as important or awe-inspiring. It's missing that sense of Spielbergian wonder that was so prevalent in the original film most people argue the man even directed it. There's nothing really wrong with the film – the actors are good at least and it's not nearly the trainwreck that is “Poltergeist III” – but there's nothing memorable about the look of the film or even it's music, two more areas where the original has this film beat. Not to mention the fact that nothing in the film is truly that scary if you're over the age of 12 (the scariest thing in the movie is probably a squirrel).  If you're a fan of the 1982 version and you have any sense of apprehension towards this new one it's probably best to just steer clear. As they say, stay away from the light.   GRADE: C

Trailer for Poltergeist on TrailerAddict.
Posted by Chris at 8:21 AM