The Fault in Our Stars: The Dumb but Fun “San Andreas” is a Rockin' Disaster Epic 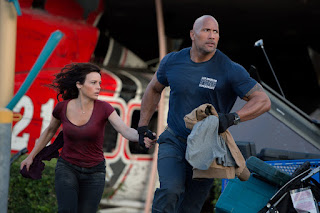 Is it impossible to make a disaster film without relying on the overused “I have to get to my [insert family member here]!” storyline? Movies like "The Day After Tomorrow," "Dante's Peak," "Volcano," and even the Oscar-nominated “The Impossible” all follow the basic premise of some kind of terrible event that separates the characters and them eventually being reunited. And there can be only one rational explanation: no one gives a crap about the actual plot of disaster films. You can count me among them. Give me your cliched disaster situations, dumb-as-stumps characters, and whatever other lame attempts at a storyline you can come up with; if it's an epic scale disaster film I don't even care. It's cinematic junk food at its best; and this being a post-9/11 world, the genre has mostly been seen as un-PC. Having said all that, “San Andreas” is one of the best disaster films I've seen in quite some time. It may actually be one of the best ones since “Twister.” And it's the only disaster film having to do strictly with earthquakes since 1974's appropriately titled “Earthquake.”

And at least this time we don't have to sit for an hour being introduced to boring characters before the rumbling starts. We're introduced to boring characters and the money shots begin almost immediately. The star of the film is Dwayne Johnson who is Ray, a firefighter/helicopter pilot who is recently separated from his wife Emma, played by Carla Gugino. They have a daughter Blake (Alexandra Daddario) who's entering college. Yes, the college girl from “Son-in-Law” is now old enough to be the mother of a college student. The three characters are separated, a massive earthquake hits, as predicted by seismologist Lawrence Hayes (Paul Giamatti) who has the all-important task of explaining to the audience what's happening scientifically.

Since Ray appears to be one of the more selfish emergency responders he insists in going after his wife and daughter before helping any of the millions of people currently being crushed, engulfed, or swallowed by the violently shaking earth. Ray sets out in his helicopter first for his wife and then for his daughter who was helped by a young British guy who caught her eye and his younger brother. The trio set out to find a location where Blake's dad is sure to find them. I'll let you guess whether they eventually all miraculously meet up amongst the sheer chaos.

Alright enough about the simply, preposterous and unoriginal plot line as conceived by story writers Andre Fabrizio and Jeremy Passmore. We have former Lost writer Carlton Cuse to blame for corny lines of dialogue like, “It's been a long time since I got you to second base” after Ray and his wife parachute onto a baseball field. But forget all that. This movie is simply 100% disaster flick entertainment. The special effects are pretty spectacular if not always totally convincing. The film is actually rather intense as proved by the small child sitting near me who almost had a heart attack. “San Andreas” sort of hits all of the standard beats but it does it all so well and is very well staged by director Brad Peyton who I won't embarrass by stating his previous filmography.

“San Andreas” is the best kind of dumb fun you can have at the movies. None of the corny or cliched moments take away from how glorious the disaster sequences really are. It brought me back to when first saw “Twister” and being amazed by what was happening on screen and not caring about the film's thin or ludicrous story. The film doesn't rely on a large Irwin Allen-like supporting cast so we don't have to jump back and forth between characters we don't really care about. And the actors here really aren't all that bad – I’m disturbed to say that “The Rock” is, in fact, not a terrible actor. If you want to see an out-and-out fun disaster epic and one thankfully not too long (like the similar “2012”), “San Andreas” will certainly fit the bill.  GRADE: B+

Trailer for San Andreas on TrailerAddict.