Ship Happens: “In the Heart of the Sea” is a Harrowing, Though Not Particularly Moving, Survival Epic 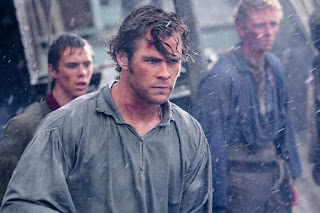 The auteur theory is a concept in film criticism that suggests a film’s director is solely responsible for a film’s creative vision. The theory holds true for many famous film directors whether it is Alfred Hitchcock or Woody Allen or Stanley Kubrick, etc. They had, or have in Woody’s case, a distinctive style that’s unique to them. If any popular Hollywood director working these days is the complete opposite of this this theory than Ron Howard is it. And that’s not necessarily a bad thing; it just means he works in so many different genres and with so many different crew members be it cinematographers, editors, or composers that no two of his films look, feel, or sound the same. He’s obviously doesn’t feel pigeonholed to one “type” of movie. His latest effort, the real life survival story “In the Heart of the Sea,” is another peculiar entry in Howard’s canon. He’s made true life survival stories (“Apollo 13”) and period pieces (“Far & Away”) but the last time he directed something having to do with the sea it was the mermaid comedy “Splash.” This high-seas survival, man vs. nature story is a first for Howard and he mostly succeeds.

As strange as it sounds, “In the Heart of the Sea” is most like Howard’s previous film the Formula 1 racing drama “Rush” in that d.p. Anthony Dod Mantle brings the film to life visually in a way that no previous Ron Howard film had been. Dod Mantle’s camerawork is simply stunning, and even if it’s dotted with obviously computer generated imagery, some of these shots are simply amazing. Howard’s film has always been mostly about telling a story that appeals to the masses with emphasis on character more so than fancy cinematography. “In the Heart of the Sea” almost relies too much on its look as we never fell too emotionally invested in the story or characters.

The film is set in Nantucket, Massachusetts circa 1820 and follows the whaling ship Essex as it hunts sperm whales for their pricy oil. First Mate Owen Chase (Chris Hemsworth) holds a grudge against young Captain George Pollard who’s only captain because he comes from wealth. This rivalry is soon overshadowed by that of a particularly enormous sperm whale that proceeds to wreak havoc on the ship and its crew. This story is told in flashback as dictated to “Moby Dick” author Herman Melville (Ben Whishaw) from a surviving crew member played by Brendan Gleeson. His younger self is played by Tom Holland from the fantastic film "The Impossible."  The film’s plot structure reminded me of “Lifeof Pi;” a story device that I didn’t especially care for in either film. The film quickly becomes a men stranded at sea survival story reminiscent of the most harrowing parts of last year’s underrated “Unbroken.” The film has distinctly gruesome moments probably because being stranded at sea without food or water can’t be particularly fun.

However, any attempt to become emotionally invested in these characters is squandered on Howard’s striking visuals. There’s nothing truly wrong with Charles Leavitt’s script but Howard seems more concerned with his visual aesthetics: this is of course the director’s first man vs. beast story and the distressing survival elements here do pack a wallop. I also enjoyed Roque Baños’ score though I would have loved to hear what Hans Zimmer or the late James Horner, both of whom regularly work with Howard, would have come up with. “In the Heart of the Sea” is a great story of survival; there’s nothing really bad about it but it doesn’t necessarily go above and beyond within the standards of the genre. It has plenty of the welcomed visual flair leftover from “Rush” which gives the period set drama a modern look that sort of just works. I wish I felt more by the film’s end but it’s another welcomed entry on Howard’s one-of-a-kind diversified filmography. GRADE: B

Theatrical Trailer for In the Heart of the Sea on TrailerAddict.
Posted by Chris at 9:33 PM