Bale Out: “The Big Short” is a Confusing, Boring Misfire 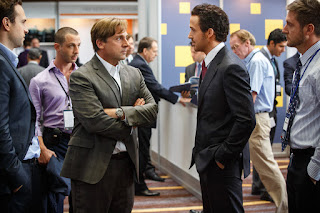 “The Big Short” can best be described as a Woody Allen film filtered through “The Wolf of Wall Street.” That sounds like a winning combination to me but since pretty much all of Woody Allen's films are talky and slow (even though he's one of my all time favorite directors) it makes sense that “The Big Short” is riddled with talky scenes of guys in suits jabbering off financial terms the film is well aware you don't understand. That's why it even condescends to its audience by defining words up on the screen for you and uses random celebrity cameos to explain things you may not otherwise understand. It's too bad the movie didn't also come with CliffsNotes. The film is about the “housing bubble” that occurred before the financial crisis that began back in 2008. It's a ripe area for irreverent, sarcastic filmmaking unfortunately Martin Scorsese already made a film that, while not specifically about the mortgage crisis, was basically a statement on it anyway. Here we have another great ensemble, who actually give it their all, wasted on an uninteresting and disorienting script and overly flashy direction.

Director Adam McKay is known for making silly comedies that star Will Ferrell. You know the ones: there's Anchorman, and Talledga Nights, Step Brothers, and even Anchorman 2. And now he's gone and made his own “Annie Hall.” Except that it's no “Annie Hall.” It's his attempt at more mature, “serious” filmmaking. He even employs lots of the same directorial tricks that have been used countless times before. He has all his characters directed address the audience. There's split screens and freeze frames and random insert shots that reflect the times. He even sneaks in his a clip of his own popular internet short “Pearl the Landlord.” In the end, none of this trickery works. You can give me the flashiest editing, the zoomiest, shakiest documentary-like camera but if I don't care about what the characters are saying or don't understand what they're doing, I’m not going to have a very enjoyable time.

It's not quite fair to compare “The Big Short” to “The Wolf of Wall Street” but it's hard not too. Martin Scorsese is a master filmmaker. He knows what he's doing. He can take dispicable characters and make them utterly fascinating to watch. No one in “The Big Short” is fascinating. Not the strange Asperger's suffering hedge fund guy played by Christian Bale. Not the overly tan, cocky guy played by Ryan Gosling. Steve Carrell isn't even funny in this supposed comedy. That's okay he's been taking on more serious roles anyways. Case in point his Oscar nominated dramatic turn in last year's phenomenal “Foxcatcher.” Brad Pitt is here in a supporting role and subplot that involves bright start ups played by Finn Wittrock and John Magaro; all of these guys might as well be speaking Swedish, it would have all made more sense.

It's obvious what the point of “The Big Short” is. It's an all-star cast with a meaty script and interwoven storylines that must be like catnip to actors. And this thing is filled with dudes: blink a few times and you'll miss Marisa Tomei and Melissa Leo. I think the film is supposed to be a comedy: I definitely didn't laugh. It's a film that certainly has something to say. I think it definitely does; it's too bad you need a financial degree to truly get anything out of it.  GRADE: C-

Trailer for The Big Short on TrailerAddict.
Posted by Chris at 4:01 PM