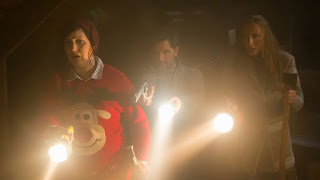 If “National Lampoon's Christmas Vacation” and “Poltergeist” found each other on Match.com and had reproduced it would be “Krampus.” Unfortunately, it's not as, respectively, funny or as scary as it's parentage. That isn't to say that “Krampus” isn't a fun horror-comedy: it does feature fun special effects and a delightfully twisted and dark tone; but it's the comedy aspect that needed a little work. Oh and the characters. Like many horror films of the 80s the film features some truly despicable people that we're forced to watch kick the bucket in variously gruesome, albeit PG-13 friendly, ways. It's really a decent effort as films like this are a rare beast these days especially considering most of these movies are pathetically relegated to what Netflix calls its horror section.

You wouldn't be crazy if the film reminds you of the fun creature features 80s directors like Joe Dante might have made in his heyday. In fact, “Gremlins” comes so closely to mind that you sort of just wish you were watching that. And that's mostly because of some of the characters we're forced to identity with. Toni Collette and Adam Scott are likeable as Sarah and Tom and they have a teenage daughter and a younger son named Max (Chef's Emjay Anthony). Max is at that age where he still believes in Santa even if he has to deal with the naysayers. He's forced to spend Christmas vacation with his redneck cousins. They include Sarah's sister Linda (Fargo's Allison Tolman) and her husband Howard (perennial douche David Koechner) and their seemingly infinite brood of selfish children. These aren't the lovable doofs headed by Randy Quaid in “Vacation” films; Howard's family is full of deplorable people. You'll wonder why Sarah, who agrees that they're terrible, didn't disown them years ago, including her equally obnoxious Aunt Dorothy played by Edward Scissorhands' Conchata Ferrell. Not only are they horrible people, but worst of all they're not at all interesting, which is a shame because besides Max's immediate family they're the only characters in the film.

Max has a special bond with his grandmother Omi (Krista Stadler) who tells everyone the tale of Krampus once some creepy things start going on: the power goes out during a particularly violent snowstorm. Beth goes missing after she sets out to visit her boyfriend who lives a few blocks away and then suddenly the family finds itself under attack by increasingly creepy and mischievous holiday creatures including a sadistic growing jack-in-the-box, wicked gingerbread men, and a particularly evil Christmas wreath angel. These creatures are brought to life in an amazing practical and computer-assisted detail; in fact they're way more impressive than any of the other characters writer/director Michael Dougherty (who co-wrote with Todd Casey and Zach Shields) has come up with. He also makes his film extremely dark; we're not talking particularly gory or bloody but this is stuff that is made of nightmares. Weak children will most likely be running for the doors.

“Krampus” feels like a film that's made to be more appreciated than actually well-liked. In this nostalgia-driven age of entertainment we long to watch films to be “made like the used to be.” You really get what Dougherty is going for her. Unfortunately, the horror is almost too intense without the comedy being funny enough to counterbalance the scares. Fortunately, it's all fun enough, especially it's inspired opening credit sequence and an ending that took I'm sure took guts to get green lit. Like another irreverent but uneven Christmas flick made this year “The Night Before,” I'd much rather watch this than anything with Bing Crosby.  GRADE: B-

Trailer for Krampus on TrailerAddict.
Posted by Chris at 10:19 PM

You need to be a part of a contest for example of the most useful blogs online. I am going to suggest this web site! http://noticiasdealcorcon.com

Thanks for creating this. I really feel as though I know so much more about the topic than I did before. You should continue this, I'm sure most people would agree you've got a gift.   hadeel web