The Perfect Storm: Why “Twister” is My Favorite Disaster Movie of All Time 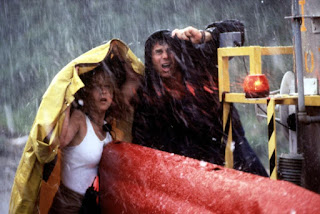 Picture it, May 10th, 1996. There was so much going on that day. I was twelve years old. It was a year to the day that I saw my first Broadway show “The Phantom of the Opera.” And I’m always able to remember my friend Amanda’s birthday because it’s the same day that the movie “Twister” opened up in theaters. As my older sister got ready to attend her boyfriend’s prom I was getting ready to experience what would soon become my favorite movie, like, ever. I had seen all those windblown TV spots about “that tornado movie” from the people who made “Speed” and “Jurassic Park.” Apparently a fast bus plus dinosaurs equals tornado movie success. It certainly worked for me. My dad took me that evening to see “Twister” and it was such an enthralling, exciting experience I’ve literally never forgotten it. Sure I had seen plenty of movies in the theater at that point; I mean I was at the ripe old age of 12. I remember seeing typical kid fare like “The Little Mermaid,” “The Wizard,” “Honey, I Shrunk the Kids,” “The Sandlot,” etc. I felt like a major leaguer when I saw the terrifying “Jurassic Park” in 1993 and was never the same since. But something about my experience with “Twister” formed my bond with the movie going experience that has remained to this day. It was literally the coolest thing I had ever seen that didn't involve dinosaurs. Oh did I mention that I was also obsessed with the weather?

My dad always says how his love of baseball started when his mom took him to his first baseball game. I find the comparison here works in much the same way. At that point in my life I wanted to be a meteorologist when I grew up. I has an unnatural obsession with The Weather Channel. I tuned into the Tropical Report every hour at 49 minutes after the hour as I was mostly fascinated by storms be they hurricanes or tornadoes. When Hurricane Bob hit the northeast in 1991 I was mildly disappointed that Connecticut didn’t get the brunt of the storm and I had to settle for rain and trees that easily withstood the wind. I think a little part of me wanted the roof to blow off or something. And since I lived in New England the odds of seeing the fascinating tornado phenomenon was pretty much nonexistent. Perhaps one day there’d be a tornado-related disaster movie?

By 1996 I was pretty sure that I really loved movies (especially since I got hooked on the Video Movie Guide which was my cinematic bible until it ceased publication in 2005). When I heard about “Twister,” how ever that may have been in the days before the internet really took off, I was pretty excited to see an action movie that was all about tornadoes. (To show how much I loved anything about tornadoes and hurricanes I also was also previously obsessed with a TV movie earlier that year that aired on The Family Channel called “Night of the Twisters” and who could forget that 1993 TV movie about Hurricane Andrew called “Triumph Over Disaster: The Hurricane Andrew Story” starring the dad from “Blossom” and Lambert from “Alien;” the less said about the Twister-cash-in rip-off “Tornado!” the better, but I still watched it). I recall reading the reviews for “Twister” before the movie came out and was disappointed in the critical drubbing the film took; Siskel and Ebert hated it, though the USA Today liked it. How the film critic from the Connecticut Post could give the film a negative review was unfathomable to me at the time. While I didn’t really follow many film critics at the time I do recall some referring to the movie has having “a stupid plot” or “dumb characters.” Sure, they were technically right on the money but they weren’t a twelve year old kid who was obsessed with weather. So, after seeing my sister off to the prom, my dad whisked me away to the local theater to watch “Twister” on opening night. The theater was packed, I was ecstatic, and I’ve never been the same since.

It was a riveting experience. It was exciting, scary, intense, funny. I didn’t even care that the threadbare plot was essentially about an estranged husband and wife trying to sign divorce papers. It was obviously the tornado sequences that I really cared about. And that flying cow obviously. “Twister” took a page from “Jaws,” as many films do, by showing very little at first and slowly revealing the power of these fascinating whirlwinds of destruction. Each tornado was bigger and more intense than the last (with jaw-dropping computer effects that rightfully earned an Oscar nomination). Director Jan de Bond staged each one perfectly giving each sequence – and each twister – a distinct personality, more so than the characters according to some. And let’s not forget the crazy finale in which our hapless heroes strap themselves to pipes with leather belts and manage to survive the suck zone of an F5 tornado. It’s that old adage that if you can reel in a viewer early on with something outlandish they’ll believe anything is possible by the time the ending rolls around. It was utterly ridiculous and epic.

I loved every freaking minute of it and I’ve been obsessed with the film ever since. When I got an awesome Twister poster from the local video store I remember thinking my life couldn’t possibly get any better. In middle school, I recall watching it on a band bus ride to play at the Republican National Convention right after it came out on VHS. I distinctly remember asking my band director, “Is this the bus that’s gonna be watching Twister?” I watched it over and over again on home video. I even recall buying the tape the night BEFORE its release date. I was at Wal-Mart and asked an employee if they had “Twister” (even though I knew it was coming out the next day) and the guy actually brought one out from the back for me. I was never happier, except for maybe the aforementioned poster score. I obviously had to eventually have it on DVD. And then on Blu-ray in May of 2008, roughly twelve years after its theatrical debut; the exact same age I was when I first experienced “The Finger of God.” I finally got to experience the Universal Studios Florida attraction “Twister... Ride It Out” (RIP) a few years ago which was generally lame but still a requirement as a Twister fanatic.  And here we are now exactly twenty years since “Twister” first blew into theaters. My love of meteorology has waned but my love of “Twister” has remained.

It’s easily remained one of my all-time favorite movies; though it’s the theatrical experience that always stays with me. The film still works on a variety of levels. The film’s musical score by Mark Mancina is a standout. I could listen to the soundtrack over and over again. And I have. If I’m ever driving by a wheat field it’s my go to choice. Also, somehow, Van Halen and mid-90s weather-related destruction made a heavenly pair. I love that the movie’s visual effects and sound still hold up to this day. If you want to show off your fancy surround equipment the “Twister” Blu-ray is your ticket. Even decades later I’m fascinated by all of the performances in the film. I love how obsessed Helen Hunt’s Jo is with tornados and how she shouts, “I WANNA SEE IT! I WANNT SEE IT!!” Ditto, Jo, ditto. The late, great Philip Seymour Hoffman is a standout as the douchey wild man Dusty. His “suck zone” speech is famous, just like Aunt Meg’s gravy. My younger sister and I would even shout, “Food. FOOD. FOOOOD!” at my mom when we were hungry. Bill Paxton and Helen Hunt had amazing chemistry you could just as easily buy them as a bickering couple as you could a happily married couple. Tornados aren’t the only villain in the film – we also get perpetually slimy Cary Elwes as Jonas the leader of a corporate-backed rival storm chaser team. Jami Gertz has the misfortune of being the audience’s stand-in as the characters spout exposition and define scientific terms for her (and us). How else are you supposed to explain what the Fujita scale is when all the characters are storm chasers? In fact, the only thing really dated about the film is the fact that scientists now use the updated “Enhanced Fujita scale” as of 2007. I’m also amazed at one of the criticisms at the time involving the supposedly preposterous premise that so many tornados could form over a twenty four hour period in real life. Twenty years later I can’t turn on the news without seeing record tornado outbreaks daily.

Ok, I admit it. “Twister” isn’t really a good movie. It’s a completely competent summer blockbuster and represents a time when summer blockbusters weren’t all about franchise building and sequels. The film, however, was practically forgotten about once “Independence Day” became a phenomenon just two months later. But I have a particular affinity for the disaster genre and “Twister” just fits the bill for me. It (along with that year’s “Daylight,” “ID4,” and the spoofy “Mars Attacks!”) also helped usher a brand new wave of disaster movies to American audiences now that computer generated imagery could produce bigger and more realistic destruction. Later we got things like “Dante’s Peak,” “Volcano,” “Titanic,” “Deep Impact,” “Armageddon,” to more recent fare like “2012,” “San Andreas,” and even the found footage tornado flick “Into the Storm.” Every year on May 10th I like to celebrate “Twister” because it thrilled me so much as a kid and it was something I really loved a lot and I enjoy honoring that. I pretty much know the film like the back of my hand. Though, it’s wise to not give nostalgia too much power because if I learned anything from “Twister” it’s that, “You gotta move on. Stop living in the past, and look what you got right in front of you!”

How could you watch this trailer and not be psyched?
Posted by Chris at 11:00 AM