Age of Apocalypse: The Decent “X-Men: Apocalypse” is Middle-of-the-Road X-Men 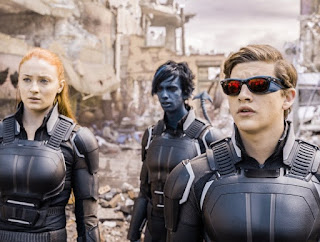 Put simply, “X-Men: Apocalypse” is an average X-Men outing. It's not really as good as the best of the franchise but it's better than the terrible ones. However, in today's golden age of comic book films average may not quite be enough. Moviegoers are being bombarded with superhero stories on the big screen – many of which are very good – and others are simply cash grabs or big ol' messes. Even though Fox has gone to the X-Men well probably more than it should have (there have been eight films including some form of these characters, 9 if you include the superior “Deadpool”), but I appreciate what they have been trying to accomplish with this prequel series of X-Men films. Each one has its own personality. “First Class” was a fun 60s style espionage thriller, “Days of Future Past” was a fun time travel sci-fi extravaganza, and “Apocalypse” feels like it's supposed to be an Irwin Allen disaster film but the film fails to give us much of what makes those movies so fun, though it has even good moments to help it rise above the worst of the bunch.

First of all, any “X-Men” film with a standout Quicksilver sequence makes it instantly worth seeing. Luckily, “Apocalypse” uses this character, played wonderfully again by Evan Peters, in a fun way and he simply adds a lot of fun to what is ultimately a sort of dour chapter. The film begins ala “The Mummy” in the BC era where Apocalypse, supposedly the world's first mutant, is about to transfer himself to a new body. It goes wrong and he lays dormant until he's brought back in 1983 when the film takes place. Apocalypse, played by Oscar Isaac underneath lots of blue make-up, is sort of a dull villain compared to what the X-Men franchise usually provides. Even his threat of total planet destruction feels underwhelming as you never quite feel anything that bad is going to happen.

Luckily, the film finally introduces us to younger versions of previously established X-Men characters. Cyclopse (Tye Sheriden), Nighcrawler (Kodi Smit-McPhee), Jean Grey (Sophie Turner), and to lesser excitement Storm (Alexandra Shipp) who becomes one of Apocalypse’s unwitting followers. Angel (Ben Hardy) is yet again practically pushed to the background this time around with Pyslocke (Oliva Munn looking like she lost a bet most of the time). Jubliee is there but you'd never know since she's never actually named on screen. Some of the other favorites like Beast (Nicholas Hoult), Mystique (Jennifer Lawrence), Magneto (Michael Fassbender), and Charlies Xavier (James McAvoy) are around as well, but most of them look like the material is beneath them. And obviously it is, these actors are big stars now and feel almost embarrassed to be starring in one of the weaker X-Men scripts. It's a shame Simon Kinberg couldn't make the stakes a little higher or get all the characters more interesting things to do. The film's weakest link is it's third act; everything leading up to it was completely watchable. The biggest surprise of all is Bryan Singer, who arguably has delivered the best X-Men films, but here seems to be going through the motions.

To be fair, I was never actually bored during the film's 144 minutes. The film is lightweight, fun, and has enough good moments to make it worth seeing. Unfortunately, when compared to what's come before in both the X-Men universe and other comic book films (ie “CaptainAmerica”) it's hard not to see the flaws staring us in the face here.  GRADE: B-


Feature Trailer for X-Men: Apocalypse on TrailerAddict.
Posted by Chris at 9:10 PM