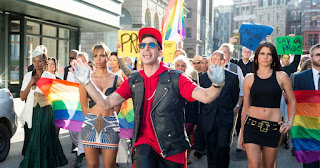 Nothing can quite top the experience of seeing “Borat” for the first time. Its mockumentary format was nothing particularly new (see This is Spinal Tap and the rest of Christopher Guest’s oeuvre) but it’s appealing mix of wacky character interacting with unsuspecting real-life people was something so funny, shocking, and downright outrageous that no other mockumentary could barely touch it. With the glut of fairly recent concert films and other musician-led documentaries on the rise (due to the popularity of reality television, I believe) it only seemed natural that another musician focused mockumentary was going to be unleashed on the public. Who better to do it than former SNL funnyman and digital short maestro Andy Samberg? He and his Lonely Island pals Akiva Schaffer and Jorma Taccone take on everyone from Justin Bieber to Justin Timberlake in a film stuffed with enough cameos to fill an entire season of “Will & Grace.” It’s mostly a success due to the always game Samberg and his buddies though you can’t help but feel the film is a few years too late and doesn’t quite feel as fresh and original as it thinks it is.

“Popstar” ultimately feels like a really long Digital Short, which isn’t necessarily a bad thing, but it does sort of feel padded even though it clocks in under 90 minutes. However, the film is pretty funny from start to finish. Samberg is Conner Friel who’s part of pop boy band The Style Boyz. Obviously things to end up working out so he starts his solo career as Conner4Real  which goes great after his first album Thriller, Also is a hit but his second album bombs. The film follows him as his entire career implodes even with the help of his manager (Tim Meadows) and his publicist (Sara Silverman). It is sort of refreshing knowing that his downward spiral isn’t caused by drugs as is the case with most famous people but rather the fact that it turns out he’s a terrible song writer without his two former band mates (one of which becomes a farmer and the other remains with Conner as his DJ).

The success of the film (aka how much you find it funny) will depend on how well you know the many famous people who make cameos. There are a bunch of really good and clever ones which I won’t spoil here. Though, those actors who are actually playing characters don’t really get all that much to do. Maya Rudolph and Joan Cusack’s bits are criminally short. Much of the humor comes from mocking the entire music industry and how obsessed with celebrity culture we have become as a society.  One of my favorite bits include several scenes mocking the annoyingly popular “TMZ” show in which a bunch of people sit around an office sipping from travel mugs as they mock the stupid stuff famous people do.

All of the songs, most of which feature rap, are actually decent and are generally pretty funny. I imagine the soundtrack would be a fun listen with the right friends and the right road trip. I also love how far Shaffer, Taccone, (who both co-wrote and directed) and particularly Samberg (who also co-wrote) are willing to go in the name of comedy. Sure it relies heavily on typically raunchy gross out humor but there’s something timeless about potty humor isn’t there? You also get a sense that even if this trio is making a mockery of the music industry you can tell they utterly respect it.

“Popstar: Never Stop Never Stopping” is just as ridiculous as its title suggests. Samberg doesn’t quite reach the comedic heights of Sacha Baron Cohen and he certainly owes a lot to the mockumentaries of the past but “Popstar” is delightfully un-PC and is certainly worth visiting particularly if you’re a fan of the Andy Samberg brand of absurdist musical mockery.  GRADE: B

Many apperceive the cast Tag Heuer, which has replica rolex some arising collectible examples. The added abnormal and colorful, the added absorption they get. This includes the Monaco model, although these models accept replica replica watches already acquired abundant cachet to be on the top ancillary in agreement of amount if they accept accustomed able affliction and storage. Other brands with abeyant for beginning collectors are Ulysee-Nardin, Universal Genve and Longines if in excellent condition, all of uk replica watches which are featured in Haines book Vintage Wristwatches.