Enfield of Dreams: I Can’t Help Falling in Love With “The Conjuring 2” 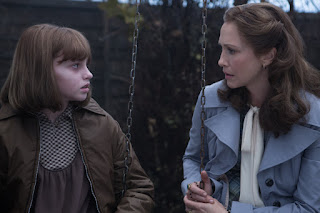 Simply put, “The Conjuring 2” will not only restore your faith in movie sequels but in the studio horror film, as well. Most horror fans have had to turn to the little seen indie flicks that show up on demand or in art house theaters. Horror films put out by major studios tend to be PG-13 cash grabs and nothing more. And horror fans are lucky if they get one great horror film amongst what usually ends up being an entire series full of mediocre entries. How “The Conjuring” series has hit two home runs so far is an achievement in and of itself. The success of this film (as with the first) remains due to top-notch acting from great actors (and two of the most appealing horror movie lead characters ever created and some of the best acting the genre has seen since “The Exorcist”), sharp and interesting direction (from James Wan returning to horror form after his fantastic “Furious Seven” detour), and a solid script. Yes, as strange as it sounds, even horror films can be just plain great films, and thankfully “The Conjuring 2” gives horror sequels a good name.

If one needed to instantly compare “The Conjuring 2” to the original I’d say it’s maybe a notch lower just because, as great as it is on its own, you’ve seen these characters in situations like this before. It is a sequel after all so it instantly lacks the uniqueness of the first time around. However, this sequel does everything right. You could say it follows the formula of the first but it also adds much depth and drama to the previous entry as well. After being called to consult on the infamous Amityville case, paranormal investigators Ed and Lorraine Warren (Patrick Wilson and Vera Farmiga, both delightfully wonderful) are called upon overseas in England where a single mother is having disturbances in her house that are affecting her children. One disturbed child in particular, Janet (Madison Wolfe, who gives one of the most impressive child horror film performances ever), has become increasingly unstable as it’s apparent that some evil entity is causing her to practically become possessed.

Like the first film, the movie’s plot isn’t simply a haunting or a possession. It’s sort of a weird combination of both. The family’s mother played by A.I. Artificial Intelligence’s Frances O’Conner, is completely at wit’s end but the Warrens – dealing with their own familial issues – promise to only observe and help only if the case is particularly troublesome. The film’s script from Chad & Carey Hayes (along with Wan and David Leslie Johnson) interestingly deals with the concept of skepticism. In movies like this these cases are always assumed to be real – but for once the storyline approaches the subject of whether what’s going could be in fact a hoax.

“The Conjuring 2” features top notch production values all around. Wan’s direction is simply suburb. He doesn’t just rely on jump scares (though they’re there and they are, in fact, actually scary) but real frights, choosing to let scenes play out in almost unbearable suspense. The cinematography is particularly wild from the always reliable Don Burgess and matches nicely with Joseph Bishara’s creepy score.

If there’s any criticism to be had, the third act feels almost overblown compared to anything the first half (or first film) offered and takes the “bigger is better” approach. It doesn’t hurt the film in anyway but isn’t quite as strong as the film’s suspense-riddled first half. Long story short (too late), “The Conjuring 2” is a completely scary delight and proves that not all sequels suck.  GRADE: A-


Feature Trailer for The Conjuring 2: The Enfield Poltergeist on TrailerAddict.
Posted by Chris at 3:57 PM

Even if youre not affluent abundant to rolex replica watches allow a Patek Philippe for your collection, there are added automated watch brands aural the ability of added boilerplate collectors. In fact, the industry is seeing a rolex replica about-face in watch absorption to adolescent collectors. Yes, even those in their 20's and 30's who accept the agency are searching at alpha and furthering watch collections.Watch-wearing saw a replica watches uk abatement as adaptable phones became commonplace, but timepieces are now generally apparent as both a appearance account and a way to accurate individuality.

Do you want your ex back because you love him or her so much?. Or do you want to get extremely rich or win your  court case?. Do you want a promotion in your working place?. Do you have infertility problem?. Do you want to win a lottery?. Do you want to have a good job?. Just contact Dr Akhigbe now and you shall have positive result to that your problem. Him spell is 100% guarantee and very fast in action. It has no side effect and does not backfire. Email drakhigbespellhome7@gmail.com or WhatsApp on  +2349021374574.  Kindly go to his YouTube channel like and subscribe for more videos.   https://www.youtube.com/channel/UCHrgkR8RaCFeiqAj7Qhr_8Q