Lady in the Water: “The Shallows” is an Efficient Little Shark Thriller 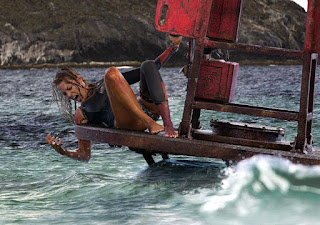 An easy way to describe “The Shallows” would be “it's 'Jaws' meets 'Gravity,'” but that would be somewhat inaccurate; those were Oscar-winning movies after all and this is a movie from the guy who directed Paris Hilton in “House of Wax.” But actually, “The Shallows” is a fun little shark thriller even if it's a B-movie through and through, which happens to be exactly how I take my fun little shark thrillers. Spanish director Jaume Collet-Serra is the master of the “efficient little thriller” subgenre having made other “efficient little thrillers” like “Non-Stop” the efficient little airplane thriller and “Orphan” the efficient little psycho kid thriller and he's right at home with “The Shallows.” Even if the film doesn't remotely pretend to know anything about actual Great White Shark behavior, "The Shallows" is a completely watchable and suspenseful thrill ride that makes efficient use of its 86 minute run time.

There's not really much to say about the plot of “The Shallows” except that it's essentially about a woman who becomes trapped on some rocks while a hungry shark circles around her. The film's script attempts to give us a well-formed principle female character in Nancy (Blake Lively) who decides to find the unnamed beach in some unnamed foreign country that her late mother used to frequent. A Spanish-speaking man drops Nancy off, where she meets two other surfers, who, besides a drunk man, are really the only other characters in the film. But that doesn't matter, this is the story of woman vs. beast. I haven't seen a woman so pissed off at a shark since “Jaws the Revenge.”

It's no surprise that shortly after catching some waves, Nancy gets attacked by a shark and refuses to leave the area because it's been feeding on a floating whale carcass. The shark also has some kind of hook lodged into its mouth which makes me think that's reason enough for us to think that's why the shark wants to badly to eat every human being in sight. This is not a Shark Week documentary; it's a shark thriller so we can easily forgive it's lack of scientific shark knowledge and feel ok with just being scared for Nancy every time she's forced to enter the water in attempt to get to shore. She's basically stuck on the rocks with her bleeding leg, her wits, and an injured seagull who I guess is supposed to be her Wilson stand-in. She's also conveniently a former medical student which helps.

If you're not expecting much in terms of Oscar-winning writing, acting, or effects you'll have a hell of a fun time watching “The Shallows” as I did. The film is overwhelmingly suspenseful and packs enough scares to make people scared of bodies of water of any kind. Lively is good enough here; and she makes Nancy smart enough that you rarely need to smack your forehead. The shark effects aren't exactly amazing but they're convincing enough; the film is scary which is really all that matters.  GRADE: B+


Feature Trailer for The Shallows on TrailerAddict.
Posted by Chris at 4:53 PM