The Golden Ghouls: The Hilarious New “Ghostbusters” Most Definitely Isn't a Bust 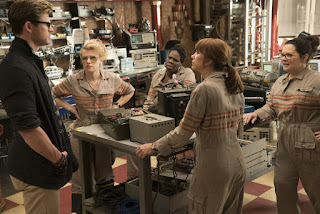 Remember back in the day when the most controversial movies were about Jesus or shoving sticks of butter in odd places? Now it's about comedies involving characters busting ghosts. Oh the horrors of someone's childhood memories being reworked for a quick buck. 1984's “Ghostbusters” was, and remains, a popular movie choice for a lot of the movie-loving public. The franchise was already technically ruined by the much-maligned sequel. And people are being thrown a completely new version featuring some of the funniest ladies in Hollywood. So what's the problem? Sure this remake doesn't really NEED to exist but neither does Ben-Hur, The Fly, The Thing, Ocean's Eleven, or The Departed – and they turned out just fine (We can conveniently ignore the fact that Ben-Hur is getting remade yet again this August). So how is this new “Ghostbusters?” It's a comic delight from start to finish, with a completely game and hilarious cast, fantastic visual effects, and some of the most fun 3D work I've ever seen. Ever. In other words, it's a blast.”

We can all drop the term reboot when it comes to the new “Ghostbusters.” If this isn't a sheer remake then I don't know what one is. This new entry follows best friends and scientists Abby (Melissa McCarthy) and Erin (Kristen Wiig) as they hesitantly team up with fellow scientist colleague Jillian Holtzmann (Saturday Night Live's current MVP Kate McKinnon) and MTA worker Patty (Leslie Jones, also of SNL) to form a group of paranormal experts to help rid New York City of recent ghostsly apparitions. It turns out ghosts are in fact real and there seems to be a human responsible for the uptick in paranormal activity. The ladies rent out the space about a Chinese takeout place and hire Kevin, a hunky but dumb as dirt male receptionist whose only qualifications are his Ken doll good looks. He's played to the hilt by Thor himself Chris Hemsworth, who is unsurprisingly good at playing stupid. The guy is certainly an underrated comedic talent.

The film is directed by Paul Feig who is mostly known for his comedies starting Melissa McCarthy. For the record, the original film was directed by Ivan Reitman who was at the time mostly known for his comedies starring Bill Murray. Is this new version as good as or better than the original? That is besides the point. On it's own terms, it's often hilarious and has a nice visual style. Anyone who found the pacing of “Bridesmaids” to be a tad slow should have no complaints here. Feig and co-screenwriter Katie Dippold seem to know exactly what they're doing and what they hope to accomplish from a female-driven fantasy comedy. The smart script addresses the real-life controversies surrounding the film in clever ways and smartly addresses the silliness that is a team of people who bust ghosts for a living. Let's not forget that hilarious “Jaws” reference.

The films visusal's are true treat. The special effects are flashy and colorful. Sure it may not be as scary as the 1984 film but I always wasn't an adult when I saw it. The emphasis here is more on the comedy elements which makes sense because these four women are absolutely hilarious. But even if this is more of a comedy, the film's visuals are a real delight, including some of the most impressive 3D work I've ever seen on the big screen. In the IMAX 3D version things fly right out of the frame itself and over the black bars at the top and bottom of the screen giving the whole thing an extra dimension that is extremely cool.

“Ghostbusters” is a real treat in what many have considered a lukewarm summer movie season. It's a film that proves that just because it's a remake doesn't mean it can't be a blast anyways. If you're a fan of any of these ladies or this series you'd be doing yourself a favor to check out “Ghostbusters.” See it out of sheer curiosity, and stay because along with “Captain America Civil War,” it's the most fun movie of the summer.  GRADE: A-

Feature Trailer for Ghostbusters on TrailerAddict.
Posted by Chris at 2:21 PM

I’ve been exploring for a bit for any high-quality articles or weblog posts in this kind of house . Exploring in Yahoo I eventually stumbled upon this web site. Studying this information So I’m satisfied to show that I have an incredibly just right uncanny feeling I found out exactly what I needed. I most for sure will make certain to do not disregard this website and provides it a look a relentless basis.   hadeel web