The Apes of Wrath: “The Legend of Tarzan” is an Abs-olutely Fun Adventure 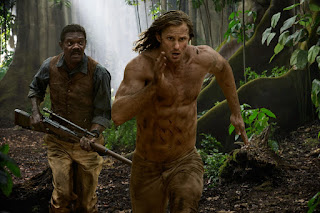 It turns out “The Legend of Tarzan” is more than just not-very-subtle marketing featuring a ripped Alexander Skarsgård. This new adventure is yet another adaptation of the classic Edgar Rice Burroughs (and it certainly won't be the last) character who's raised by gorillas in the jungles of Africa. This new adventure, of the hundreds of adaptations since the early 1900s, is the first big profile release since Disney's 1999 animated hit. “The Legend of Tarzan” is traditionally told and ends up being a rousing adventure story in the vein of “The Mummy” or “King Kong.” Is it altogether “necessary?” Probably not, but at least the spirit of the character and the sense of adventure are alive and well in this big budget extravaganza.

This new Tarzan adventure saves the origin story to flashbacks and instead takes place after Tarzan (Skarsgård) has already assimilated back into regular society. He goes by his birth name John Clayton III, drinks tea and is married to his beloved Jane (Margot Robbie). The film's main plot revolves around the evil Leon Rom (Christoph Waltz), on behalf of the king of Belgium, trying to exchange the jungle man known as Tarzan to an African tribe in exchange for valuable diamonds. John agrees to visit is African home and those he remembers from his past, reluctantly letting Jane tag along until the homecoming becomes an unexpected rescue mission. Soon John must become the vine-swinging Tarzan once again and restore order to the jungle.

Is “The Legend of Tarzan” silly? Of course it is; it's about a man raised by gorillas who swings from vines. There's a reason why that scene from “Indiana Jones and the Kingdom of the Crystal Skull” was so negatively received; people swinging from vines is a silly concept in the modern film age. That doesn't mean that this new Tarzan is a heck of a lot of fun. It's like a fun safari adventure that reminded me a lot of Peter Jackson's “King Kong” remake. Sure the visual affects aren't all that amazing but they get the job done. This isn't up to the level of “The Jungle Book” which had Oscar-worthy CGI animals.

The actors here were pretty decent. Skarsgård is fine in the title role and he certainly looks the part. His Tarzan is a man of few words (of which are written by co-writers Adam Cozad and Hustle & Flow's Craig Brewer) and I believed him and Jane were in love. Robbie is set to become a household name any day now. Waltz choose the scenery as another over-the-top, but entertaining villain. And Samuel L. Jackson feels predictably out-of-place as George Washington Williams but he's certainly adds the requisite comic relief. Director David Yates, who spent half a decade directing the latter Harry Potter movies, feels right at home here. The movie's African accented music score from Rupert Gregson-Williams is a standout here. The film flows nicely, I'd be lying if I didn't get caught up in the story as predicable as most of it is.

“The Legend of Tarzan” is just a fun throwback adventure. It sort of reminds me of a fun 90s adventure with modern effects. The actors are good, the direction is fine, and the story movies along and isn't overly complicated. I can't account for how much the story aligns with the original source material but it feels like a proper modern live action version of the character. Sure there aren't any fun songs here like the Disney classic but it all goes down smoothly; for a fun diverting adventure you could do a lot worse.  GRADE: B

Feature Trailer for The Legend of Tarzan on TrailerAddict.
Posted by Chris at 10:51 PM