Trek the Third: “Star Trek Beyond” Maintains the Energetic Fun of Its Predecessors 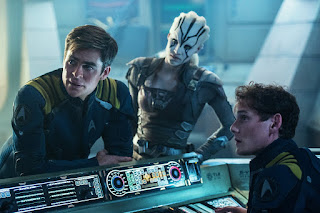 I’m now at my all-time record of most Star Trek films seen by me. I count 4, which includes all three of the rebooted series, and one “Wrath of Kahn” (thought by many as the original series’ highpoint). For the record, I couldn't quite make it through "The Motion Picture, "The Voyage Home," or "Generations." It’s actually possible that the latest entry “Star Trek Beyond” could actually be the best of the bunch. The first movie did an amazing job of making a somewhat unappealing thing very appealing to a lot of people. The second movie was just as fun (if not more so) but still angered a lot of those avid “Trekkies.” This third film, while seemingly upping the ante on action and spectacle according to the trailers, is actually a really fun rescue mission movie. The plot is simple enough which gives plenty of time to devote to the characters who we’ve gotten to know over the past few films. This Justin Lin-directed “Star Trek Beyond” is engaging and purely fun, escapist entertainment. And best of all you don’t even need to be a Trekkie to decipher any of it.


Things haven’t been too prosperous for the crew of the USS Enterprise since the events of the last film. The film opens as Captain James T. Kirk (Chris Pine) laments about taking an Admiral position on the space station known as Yorktown, with intentions to promote Spock (Zachary Quinto) to captain of the Enterprise. Spock is stressed about learning about his older self having passed away (and he and Urhura (Zoe Saldana) have amicably split up). the Enterprise is soon back off to work, this time on a rescue mission to help a survivor from a rescue pod. Not to anger too many nerds out there: not surprisingly, “IT’S A TRAP!” The Enterprise is completely ambushed and left nonfunctional in a truly nail-biting action sequence. The crew is left mostly stranded and separated from each other and they must attempt to rescue a majority of the Enterprise crew from the evil clutches of the villainous Krall (Idris Elba). The MVP of “Star Trek Beyond” is also a new addition, her name is Jaylah (Sofia Boutella) and this black and white streaked lady is a really great addition to an already enjoyable romp.


“Star Trek Beyond” promises all of the action, fun, and spectacle promised by the relaunch of this series way back in 2009. There’s not much exploration here for the real fans but it’s probably for the best because this is an exciting movie that hardly lets up. Fast & Furious director Justin Lin has taken the reigns from JJ Abrams, who was too busy directing another nerdfest known as “The Force Awakens.” At first Lin seems like a strange choice until you realize what a visual delight “Beyond” truly is. There’s a real sense of camaraderie amongst the Enterprise crew with plenty of enjoyable family/workplace dynamics which makes sense since he did the same with the “crew” from the Fast & Furious films.


The script also feels refreshing and on point which is probably because it was co-written by Scotty himself Simon Pegg and Doug Jung (who also plays Sulu’s husband). And even if the plot remains slightly dark, there’s plenty of humor to be had here. The banter between Spock and McCoy (Karl Urban) is of particular delight.  As always, the film features state of the art visual effects and production design, not to mention a fun soundtrack as well. I’m not sure how much fans of the original show and movie series will enjoy this latest entry, but I certainly found it to be a trek worth taking.  GRADE: A-


Feature Trailer for Star Trek Beyond on TrailerAddict.
Posted by Chris at 4:18 PM

Had to see what the minus was for.