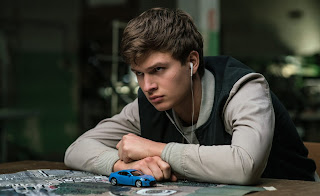 You know a movie isn't remotely realistic when the postal worker is portrayed as extremely friendly and helpful. It also doesn't matter that everything that happens in “Baby Driver” is preposterous and over-the-top; it's a sheer delight from beginning to end. A fast-paced heist thriller with cool car chases set to a whirlwind music score, “Baby Driver” takes a familiar premise and makes it wholly unique. The film almost functions as a musical version of a “Fast & Furious” film. It's a feast for the eyes and ears – everything a movie should be – and cranks it up past eleven.

When we're first introduced to the film's hero, who goes by 'Baby' (Ansel Elgort), he seems almost too perfect and annoyingly cool to be real or even likable. This young guy, with his hip shades covering his prepubescent face, walks around with earbuds in his ears, the other end attached to a practically defunct iPod. There has to be a reason right? Of course there is because Edgar Write has a crafted a fully formed character here and it becomes quickly clear how the troubled Baby functions when he's not being an outstanding getaway driver. It turns out he owes a debt to heist mastermind Doc (Kevin Spacey) and the kid is the perfect driver for his rotating batch of thugs, robbers, and murderers. Baby cranks up the tunes as he's driving the criminals to safety and is pretty anal about the timing. At one point he has to rewind when the group is forced to steal a different getaway vehicle.

Baby only has “one more job” and then he's out. It's never that easy right? Things get complicated when he meets a pretty diner waitress named Deborah played by Lily James. Like most characters in these situations he wants to run away with her and flee his criminal life. Nothing in these plot descriptions can be read as all that original and yet the film is one of the most fascinatingly unique movies you're bound to see this summer. And that's due to the brilliance of the directing, editing, and sound. Each heist scene has a rhythm and is directed like a musical number complete with well-choreographed sound effects like some kind of weird action scene ballet.

“Baby Driver” is an almost perfectly executed piece of genre filmmaking. It's almost utterly suspenseful and pulls at the heartstrings at all the right times. You really get inside Baby's head and understand him in and out. The fact that he's so young and has to look after his own deaf foster father is a testament to the old soul living behind that baby face. Not caring about Baby is impossible, even if he seems too cool to even be a real person. Wright has crafted a realistic fantasy world, one in which car chases are set to music but there are no magical creatures. The film, even with it's initial lighthearted tone, reaches darkness by the end but it never feels pessimistic, depressing, or cynical.


Car chase movies aren't anything new in these summer months. But “Baby Driver” brings something completely unique to the table. It's precision is almost unparalleled. The action is sure to make your jaw drop. The music is catchy. I don't recall the last time I was tapping my foot to a car chase. And it's sometimes pitch perfectly funny. The performances fit perfectly into the heightened world Wright has created. In another summer full of sequels, retreats, and reboots, it's nice we have something that feels familiar and yet something you've never quite seen before.  GRADE: A

Excellent post. I used to be checking continuously this blog and I’m impressed!
Very helpful info particularly the ultimate part
care for such information much. I used to be seeking this
particular info for a long time. Jelly Gamat Jakarta Pusat